We are currently working on a system based largely on the discussion that guiltar had previously started HERE- . With this addon, you can manipulate the output from the forum and thread view into, well, anything you can think of. vBulletin users could compare this to vBGeek's GARS system. This started out to be a MarketPlace addon for extralicense.com but has since morphed into something much larger and cooler.

What we are looking for is real world uses and expectations from you, the users. I have attached screenshots of the backend so you can see some of the flexibility built into the system. As we further progress with the developement, more info and screenshots will be provided. Oh and one more thing, No we don't have a timeframe yet

Attached are some backend screenshots so you can see some of the options and permissions. 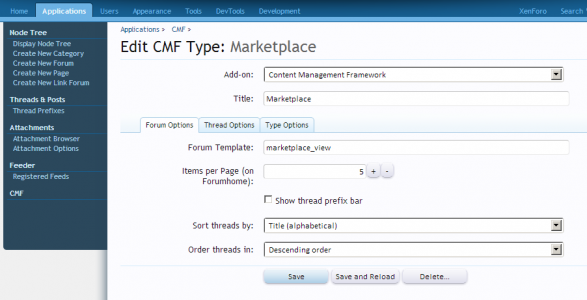 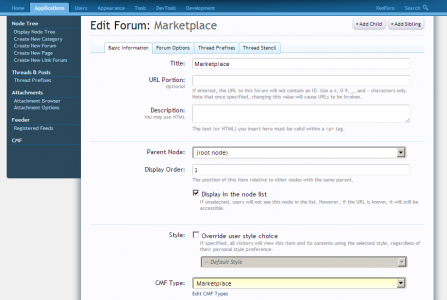 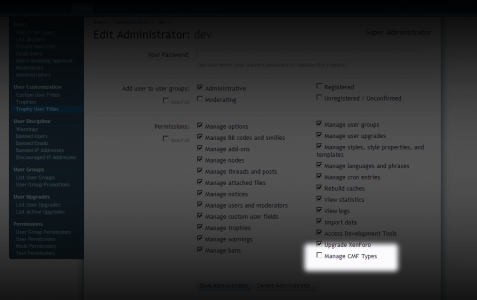 What's the scoop about the Wiki system ?

Why no idea of timeframe at all? this looks very cool but guiltar's thread had just about finished the coding when he sadly had to give up on it.
Has it been altered?

If multiple, the page needs option to have a text menu top and bottom of each page.
If not default is standard pagination.
If yes like this:

Page 1 [TITLE] Page 2 [TITLE] Page 3 [TITLE]
Author can optionally complete a page title or not.
The page links off the "Page 1" part of the text.
This menu can be updated as each new page is added to the article, and the updated menu displays on all the pages the same.


Secondly articles need to handle comments. My members don't want blogs. So it needs to link to a standard forum thread.
Author can optionally select an existing thread, or create a new one.
The thread appears top and bottom of page content as - The discussion on this article is here." Link on full text, centred, appears under the top multiple page menu, if there is one, and above the bottom page menu.

What about refining searches? eg search threads only? search articles only?

Forgot sorry - it helps if attachments/ images can be re- used on multiple pages of an article.
This probably needs a setting to increase the number or size of of attachments if admins set tight restrictions on ordinary posts.

I know a lot of people have been interested in enabling a user to have their own personal library.
a link off their Profile opens their own page of listed items with a snippet preview.
privacy permissions - self (for drafts) / my follows/ members/ public.

Could handle gallery-type articles of picture pages that way too.

I think this is what we really need - we need a wiki (simple) and articles......main thing for us is not just the flexibility to create those divisions, but the ease of layout of the specific entries, etc. once they are created.


I had a bit of info from these people and I remember guiltar's project. It's all based around existing XF components - threads and posts. They get additional functions to serve as other things.
F

Will it have custom fields & categorization just like Expression Engine (there's free core you can test) and Processwire?

Morgain said:
Why no idea of timeframe at all? this looks very cool but guiltar's thread had just about finished the coding when he sadly had to give up on it.
Has it been altered?
Click to expand...

This is not a continuation of Guiltar's code. It is written from the ground up. We have had no access to his code.

There is no timeframe because we are collecting feedback from users and are not limiting ourselves as to what you need.

craigiri said:
I think this is what we really need - we need a wiki (simple) and articles......main thing for us is not just the flexibility to create those divisions, but the ease of layout of the specific entries, etc. once they are created.

Let me first dive into how and why this addon works:
We have opted not to create our own content types and decided to manipulate Xenforo's default content types. Some think this is is a bad idea because of problems with certain addon's also utilizing xenforo's default content types and creating all kinds of havoc. The answer is simply, code quality. It can be done and it can be done to not conflict with anything. Although I agree that using our own content type is better (which we will be creating custom content types in the future for more complex systems), is simply isn't needed for simple things. Put it this way:
What's the difference between an article and an thread?

the only difference is the presentation, right?

Also it prevents data loss, if you move away from xenforo to an competitor, It allows you to import the main data as threads to the competitor product

Even if somebody wants to move from CMF blog to an xenforo blog addon product, it wouldn't be hard to create an importer

Now to answer your question: Because we use xenforo's default content, you do not need to have any PHP knowledge to create simple content types. And because of that, any and all data will be included in Xenforo's default "What's New" so content can be found easily.

Here is an example

goblues said:
Here is an example


Wow, that is awesome! I used Gars for a brief time, dropped it because it was no longer developed and maintaining it was a nightmare.

I used it extensively to add extra fields to the threadlist (where the threads are listed inside a forum & node) The user could seard for specific fields. I don't know if you intend but this would be interesting if it had a portal also, like XenPorta. That would be truly awesome.

I think what you've described so far is pretty much spot-on. The idea of "front page" content showing up under What's New (and any search in general) is pretty awesome.

I do have a couple of specific things to consider:

1. "Draft" content. A lot of articles take days or weeks to put together, format, preview, etc before they're ready to go live. Not sure how to handle this. Maybe they're just separate/hidden nodes with a tabbed interface or something.

3. Some sort of media manager. I'm focused mainly on the ability to pull an image from a library, size/justify(!!!) it, and place it in an article. It would also need to have caption text that's tied to the image in the manager. Caption text should be in addition to alt text, but maybe pull one from the other if both fields aren't completed, etc. I should have the ability to pull out individual images to place in the content, then a gallery view that would use a lightbox to flip through all the images in that article.

4. "Sidebar" content. We use WP for our front page and have added an extra PostID to each post. If you plug in the post number of some other post in that field, it will then show the content of that post in a sidebar alongside the article. No postID, no sidebar. Maybe it's just a second text field appended to the first post. You could expand on this idea to do any number of different things. Maybe you've got a live event comment thread <cough, rapid ajax polling for new comments>, and you use the sidebar to maintain a leaderboard. Then you format it to put the poll in the sidebar. You could add a poll for "who do you think will win today's race?" and it would show up under the leaderboard alongside the article.

5. Multipage content. I don't do much of this, but to follow up on Morgain's comments above, this could be as simple as some BB code in the first post. Type your first page, add a bb code for [page=This is the title of page 2], and it would sort pagination out that way. If you wanted to display that same content as a thread later, it would just ignore the BB codes. Comments would be displayed on all pages, but would have to tabbed/paged separately.

And yeah, I don't know what kind of fires I could light to help speed development along....

Let's say you have your "article" content type that gets displayed on your landing page or something.

Would there be a way to pick from a few different templates within a single article? So I go to post a new article, and I pick whether it's a how-to article, with all comments shown single-file at the bottom of the page, or maybe it's a live event, so the comments are formatted into a fixed size scroll box, etc. Or maybe it's just a photo gallery, so it formats the photos into a grid and shows the comments below the gallery with pagination.

Would it be able to do all of this with articles?

jonsidneyb said:
Would it be able to do all of this with articles?


This this this! I've been considering using WordPress as my landing page using a bridge to the forums, but it's a one way option (you have to create the article in WordPress and then promote it to the forum). I need the opposite where a member's post can be promoted to an article.

YES.
#1) start small. Get a release out ASAP. Say what you are going to do and nail it. Keep the price low. Instill confidence.
#2) Expand.
You must log in or register to reply here.

K
XF 2.2 Wanting to show "Oops, link does not exist" when I remove a thread from the main forum.