Voting system could be more obvious

I guessed what the number and arrow probably meant because I have been reading the HYSs, but i think a lot of normal people wouldn't know that.
But they would understand if for example it had the word VOTE above the arrow and vote counter on the right. So this suggestion is purely to have the word, or an option to have the word there for those people who aren't used to these things.

EDIT: might also help if the box was on the left, people may be more inclined to notice it.
Last edited: Jun 24, 2020
Upvote 27

PS5Forum said:
Honestly, I like the arrow without the line. I do think it needs to be a bit more noticeable. Like maybe put a new square around the arrow? Like so it becomes a different hue, like it does now...?
Click to expand...

FA has a bunch of different arrow types available. When the time comes it'll be easy enough to swap them out.

Mr Lucky said:
Although there's plenty of merit in making the arrow look different/better/more it still doesn't help people who do notice it , but still don't know what on earth it is for.
Click to expand...

Agreed, which is why I already voted on it.

jmurrayhead said:
But bigger/bolder and a different color
Click to expand...

At the moment I'm thinking the long arrows for me yet because, at least on desktop, there is going to end up being a lot of 'dead' space on the right side of these kinds of posts and the longer arrows helps draw attention to over there. Combined with the word "VOTE" or something else like Mr. Lucky is suggesting will really make it obvious then.

Like others have mentioned, the user base for my main site are not tech oriented and likely have never even saw Reddit other than it being mentioned somewhere so making it as obvious as possible for them what the interface options are will be needed.

Related to this subject, the vote button is quite invisible on mobile devices.

I overlooked it twice and when I finally found the button, it doesn't look like a vote button. 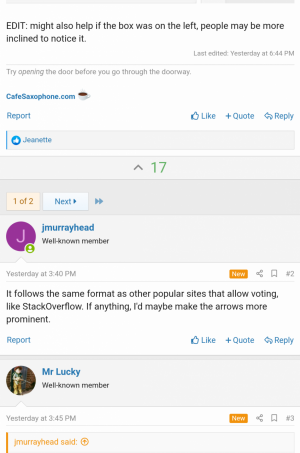 jmurrayhead said:
. If anything, I'd maybe make the arrows more prominent.
Click to expand...

Having thought about it more, it would help if, instead of arrows, they were thumbs up/down icons as with the YouTube voting system. People would have more chance of recognising what it is even without the word.

You can change that on your own easily but I am in no way going to do that. Why even have this system if it is a reaction? But I digress.

One thing they are not going to do is conflate the two systems when they just spent all this time creating two dedicated systems. You can open that can of worms if you want.
Last edited: Jun 26, 2020

XF 2.1 Requested Page could not be found