This hotfix is for a "seek" error if you are running "No Restrictions" with Twitch.
This also fixes an error related to MySQL and "PLAYER UNKNOWN'S BATTLEGROUNDS".

Twitch has once again, deprecated their API. They have just released their v6 API, and because of that, they are now sun-setting their old v5 API. Because they release a new API every year, we should all be used to dealing with this by now. Thankfully, you don't need to resubmit your channels this time, as I've implemented some silent on-boarding methods into previous versions of the addon which automatically prepped channels for this update.

However, I was not able to do such a thing with the games database. With the v6 API, you are no longer able to scrape the Twitch API based on the name of the game they are playing; instead it must be scraped using game IDs; similar to how it already works with Mixer. Because of this, you will need to update all your game spellings for Twitch with their game IDs, instead of game names. If you do not do this, and you use a "Games" scrape restriction; you won't find any live streams.

So now you may be asking, "Where do I find game IDs?"

Well that's the best part! Head to your approved games list, and click the edit wrench next to each game. On the edit screen, for Twitch (and Mixer/Smashcast), simply type the name of the game in the associated field and click submit. The system will automatically attempt to find the correct spelling in the Twitch database and replace the game name with the correct game ID. If it can't find the game, it will return an error.

BEFORE uploading and installing this update, please DELETE the contents of /library/EWRrio/Services from your XenForo directory. If you don't do this, you WILL get errors. If you fail to do this, the easiest solution to fix it is to completely uninstall and re-install the addon.

This update removes the "Games" restriction from YouTube. As of last week, YouTube has completely removed the granular freebase topic ID system from their API. Because of this, you can no longer search the API based on what game a streamer is playing.
This update also fixes the white chat boxes with YouTube if you run the upgrade script.

You will need to re-submit your TWITCH channels after this update.
Sucks. I've always through one of the great things about the Twitch's API was not having to deal with cryptic data such as IDs (such as YouTube or Ustream). IDs aren't used anywhere on Twitch; but now we gotta parse based on that data? Meh...

This is a HOTFIX. If you already have 1.2.1, you do not need to run the upgrade script.

This is a significant and important update!
Please read all the patch notes before you install this update!

The previous approach was more of a "buckshot" approach where every service was pinged with every different spelling of a game, even if the spellings were not relevant for certain services. The new approach instead has spellings defined for each service individually. Because of this, you will need to setup your spellings again to match the new system.

This new method was implemented because it will greatly reduce the number of cURL operations required for this addon. Let me show an example of how it works with the game "Final Fantasy XV". Depending on which service you ping, the spelling of this game could be different... for instance (these are examples, not necessarily correct)​
With the old system, every service would be pinged with all 5 spellings. So if you have 5 services enabled, thats 25 cURL operations. With the new system, each service will only be pinged with spellings matching their service... reducing it to only 5 pings.

Naturally, because of this new system, it takes a small bit more setup on your part... but its much better for performance in the long run. Below is an example of what my setup would be for the game "Overwatch": 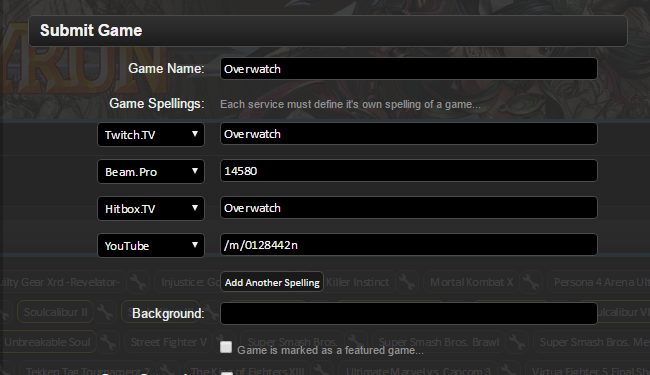