I'm trying to accomplish something similar in XF, but obviously there is something I don't understand yet.

I created a new User Group called Bounced, that removes the privilege of being able to post. In the Bounced user group, I set the User Title Override to Use the following user title: Email Defunct.

When I manually place a user into the Bounced user group, their User Title becomes Email Defunct just as expected.

So I created a User Group Promotion which I called: Invalid - Email Defunct


Promotion is set as Active and the Add User to User Groups: Bounced box is checked.

Under the Apply This Promotion While... tab, only two things are selected:


Privileges and Status: Email invalid (bounced)
-and-
User is a member of any of the selected user groups: Registered​
I've searched the forums and understand that the cron job for such, will only update users who were recently active. I also (thought I) learned that if you choose Rebuild User Group Promotions (under Tools/Rebuild Caches) that it would perform the promotion for ALL users who met the criteria regardless of their last activity date.

However, it doesn't seem to work for some reason.

I have just one user who should match this criteria and his user record is as follows...

I understand he has not been active since Dec 2013, but what can I do/run in order to get the User Group Promotion process to automatically add him to the 'Bounced' Secondary User Group?
Sort by date Sort by votes

adwade said:
I also (thought I) learned that if you choose Rebuild User Group Promotions (under Tools/Rebuild Caches) that it would perform the promotion for ALL users who met the criteria regardless of their last activity date.
Click to expand...

That should be the case - it has worked for me in my use cases/testing.

What is the actual criteria for the user group promotion?
It may be that this user doesn't meet it.
Upvote 0 Downvote

It's just the two things I mentioned... 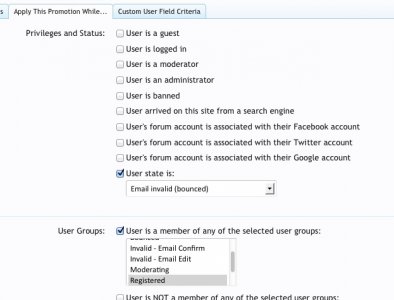 ​
One other piece of information, since we just converted to XF in Dec 2015 could the import process from vB (of a member inactive for 2yrs) have anything to do with it?
Upvote 0 Downvote
You must log in or register to reply here.