So I decided to get the word out as I'm coming up on an Alpha release for testing purposes. Everyone should remember WoWIntegrations, I took it over, once I looked through the code more and realized it is outdated and slows down your site when doing character searches, I decided to rebuild from the ground up under a new name.

xenWow will allow the following in Alpha:
That is a small list compared to what is planned for future versions, as tests go on more features will be added such as a straight news page showing latest news from the guild which includes achievements and gear acquired.

You can see in the screenshots what I have completed thus far with a release of alpha coming this Friday but Monday at the latest.

Character Claim Page:
This page asks the member to login and remove specific items to verify they own the character. They have to completely logout to update the armory and then confirm the claim. The page is not finished yet as I ran into a snag with a cron job which I may have to wait until next alpha update for the fix.

Right now I have one tester who gave a suggestion of grabbing bank data by the guild leader or officer then importing to this add-on. I have looked into it and came up with a method which will require me to build an add-on for WoW that will grab the guild bank data then they get an encrypted text they copy and paste into the system on their site which will then decrypt it and display a guild bank like page.

I did this thread to bring in suggestions if any. At least I want to get people who use the old version excited about an updated version that will have major improvements over the old version including query speed up along with API speed up.

I'm wandering if this could be used for other games.

TwistedMerlin said:
I'm wandering if this could be used for other games.
Click to expand...

It all depends on the API available for those games.

JulianD said:
It all depends on the API available for those games.
Click to expand...

I was primarily thinking, WarFrame. I'll look into it and see of they have an api available

TwistedMerlin said:
I was primarily thinking, WarFrame. I'll look into it and see of they have an api available
Click to expand...

There is an API for WarFrame but I have not found a public API YET. I will dig more into this as I get closer to wrapping up testing of xenWow. I want to release a line of API's. Any API available for games that can be used for this same type of add-on, just give me details and where API is located, I can work from there. Even just naming a game, I'll dig into it and make notes on my site in a location I keep private notes on future add-ons.

Ok my site is working for everyone. I screwed up the nameservers when I started this server and didn't know it since I could access the sites. There is a live version that I work on daily so you can see it progress live. I intend to do that with all add-ons I build from now on, do live building since most of my testing is done late at night when no one is visiting.

Mythotical said:
So I decided to get the word out as I'm coming up on an Alpha release for testing purposes. Everyone should remember WoWIntegrations, I took it over, once I looked through the code more and realized it is outdated and slows down your site when doing character searches, I decided to rebuild from the ground up under a new name.

xenWow will allow the following in Alpha:

Guild levels no longer exist.. They were removed at release of WoD.. All guilds now start with 6 perks which use to be unlocked as the guild leveled up. No other perks or higher perk levels can be achieved..

@Mike Edge Yes I know, I still play. I have my reasons for including guild level but mulling over your post, I think it best to remove it so there is no need for the level to be explained to all new players that may join a guild using the add-on. Thanks.

So with BlizzCon bringing down the API I was using to test things, that would be the old API endpoints. I'm using the new API endpoints so everyone who wants to needs to get an API key. The old endpoints will eventually be removed and that leaves the new endpoints that requires an API key. Its easy to get an api key and its free so don't sweat that. Once Alpha is release, instructions will be placed in that download and on my site to receive an API key.


Mythotical said:
Here I am again in the Offtopic forum during another boring class. Anyway, got a phone call before class from Gamestop that they are taking Cataclysm pre-orders tomorrow so I go and look around, apparently they are wanting an Oct 1st release but they are unsure if they will make that target date or not.

So for those who play, do you plan to play Cataclysm? If so, what do you look forward to the most?

For me I look forward to the Deathwing raid, that will be fun as anything.
Click to expand...

Of course, I have tried quitting so many times but the game is a nice break from everything else.

After careful thinking, I decided to push the alpha release back by another week to week and a half to allow me time to get the main features in there I want. Plus BlizzCon going on, API calls are taking a little longer so I have to make sure they are fast and won't hang on XenForo.

And another update, little late got preoccupied with other stuff around the house, this time I have one feature left on the front page then add in the two admin area pages then Alpha v0.0.1 will be released for testing and hopefully I'll see a larger interest. I'll try to make a post every other day to keep this update going.

First to reveal is the Claim Page I showed prior, in this case if you don't remove the right gear it will return you back to the page and show you the items again with a message that you did not remove the correct pieces.

Next is the page if you do remove the correct gear then you get the success page, right now it just sits and you click the nav to go anywhere. I'll add the redirect tonight or tomorrow.

Now when you view the roster you will see your characters claimed. This will change in Alpha v0.0.2 with an unclaim button plus profile tab that displays those characters.

Lastly is the guild news page that will display all news that was imported. This just isn't the latest but displays everything. 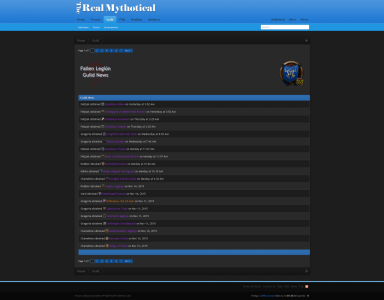 Guild Achievement page is the last frontpage feature for Alpha v0.0.1 but in Alpha v0.0.2 there will be a few cosmetic changes, new features, and hopefully more admin pages that will be useful.

Now with the install of Alpha v0.0.1 you will have to wait until you have acquired your Battle.Net development key which is free. Once you have input that into the options, within a minute to 2 minutes it will begin the import process so I suggest not allowing others to view it until that happens. Usually wait a full 24 hours to make sure it imports everything but you don't have to.

EDIT: Application will be in Alpha v0.0.2 instead of 0.0.1 as I have a few ideas on that I want to make sure works well before opening for testing.

Bi-weekly update, the guild achievements feature is taking longer due to how JSON returns the data, I'm wanting to make sure each one is imported properly and matched up with the right data/time and the correct requirements for the achievement to have been completed. Stay tuned, I'll try to get weekly updates going but being Dec, planning for Christmas and what not takes more time than I have ever dedicated to Christmas. LOL

Update: Feeling pretty under the weather so halting development until I'm over this illness. So far I have the sneezing, coughing, tiredness, body aches, gah sounds like the flu.

Ok since I have come across some money issues right now due to Christmas, I'm going to let my VPS go for a month or 2. I will be working on this in my spare time of trying to find a job and family so it will be slow development but I want it to work the first time so slow and steady.

Bringing server up tomorrow to begin testing of XenWow Alpha v0.0.1 and based on the test results will determine if I move forward with a full test release or apply more work.

My site is live again. If a few could click my site in my signature here and please let me know if it loads for you. If not, I ask that you wait 48 hours from the time of this posting and try again then report so that I am aware of any load issues. Had an issue before and this is a fresh server which means I'll need to add a few DNS details.

loads for me, rather slow but does load

Same very slow... but does load

Awesome ty. Some cases it may load slow due to it propagating still. After another 24 hours I'll hopefully won't have to do much but if it still loads slow then that means NGINX is being difficult.
You must log in or register to reply here.

XF 2.2 Posting chapters of a book and the 10000 character limit - best workaround other than increasing the limit?