Today, we're ready to talk about what's coming in version 1.1 of the XenForo Media Gallery add-on.

Mike said:
We intend on releasing updates to our official add-ons to add support for tagging.
Click to expand...

So, this one likely isn't going to be much of a surprise. XFMG already includes a content tagging system for media. In XFMG 1.1 we are replacing that system with the same content agnostic system we introduced in XenForo 1.5.

As with XenForo 1.5 there are two possible positions for displaying tags. The top position in the gallery is just below the media title:

And the bottom position is just below the media, controls, and author information:

And they also appear in the same way as they do on threads:

There are some permissions relating to the ability to tag media which are similar to the permissions for thread tagging. In addition to a moderator permission that allows managing the tags of any media:

When upgrading to XenForo Media Gallery 1.1, we will automatically transfer the tagged content to the new system.

One of our most popular suggestions is to allow the uploading of videos. This is switched off by default, but it can be set, like the other media types, on a per category basis, with permissions to allow it to be used in Albums.

The main concern with handling video uploads is one of compatibility, various pre-requisites and your server's ability to actually be able to handle the process. The solution we have implemented has been designed to ensure most of these concerns are mitigated in some way.

The good news is, this feature doesn't actually require any pre-requisites to be installed to be used in a basic way. Out of the box once you have set up permissions and some other options (see below) you can start uploading videos.

Once a video is uploaded we attempt to ascertain whether or not it should play in most modern browsers without the need to transcode it (typicaly this would be a H264 video and MP3/AAC audio). If it can't be, this error is shown:

This really gives the ability to very easily support video uploads for what is probably becoming the most prevalent video format, straight out of the box without any configuration.

However, this does lack some desirable features. Aside from not being able to transcode, by default generating a thumbnail from the video isn't supported either. This is where FFMPEG comes in.

FFMPEG is a cross platform solution used to convert audio and video formats. Setting this up should be simple. It should just be a case of downloading the binary files supported by your server OS and specifying the path in the options.

By default, providing the path to the FFMPEG binary doesn't actually enable anything. There are two things it can be used for. It can be used to generate video thumbnails. So, even without enabling the ability to transcode videos, you can, at least, allow thumbnails to be generated automatically from the supported videos you upload.

FFMPEG can also be used to transcode videos to a supported format when required. Given the same WMV file that caused an error above, this will now upload successfully: 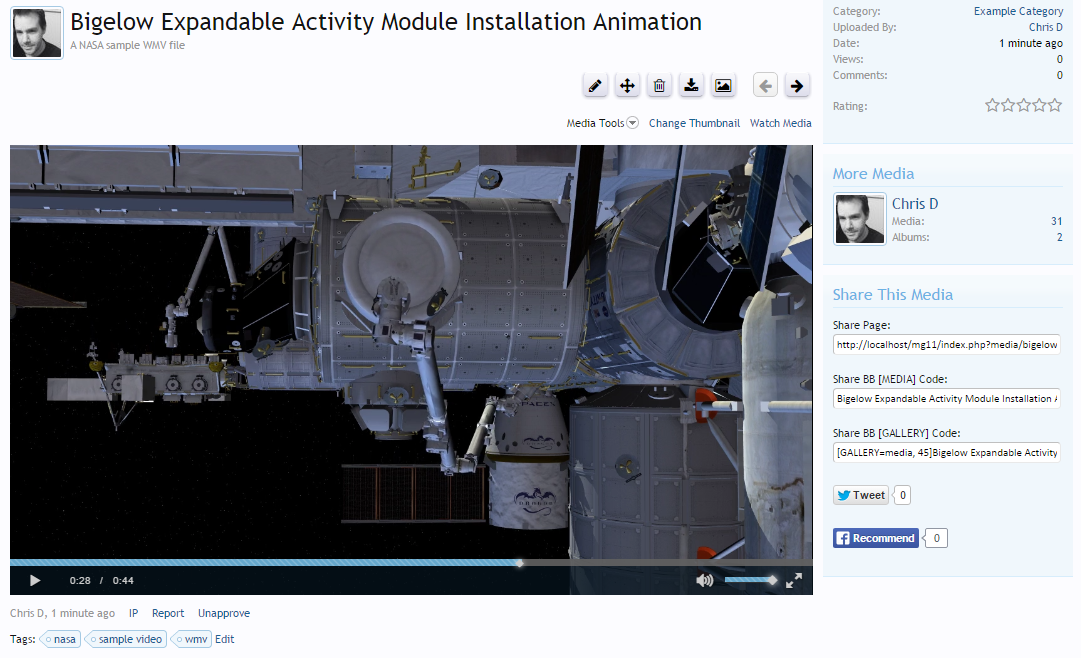 The video library used to actually display the uploaded videos, VideoJS, is actually included in the XenForo 1.5 package so it can be used for other uses if you wish.

Of course transcoding a video isn't a quick process, but the process is completely transparent to the end user. When saving media which includes some video that needs to be transcoded, a notice is displayed briefly notifying them that their media needs to be processed.

As you can see from the options in the screenshot above, you specify the path to your PHP binary and you set a limit to control how many videos will be processed at once. When a video requires processing we add it to the queue. Once the videos start processing, we defer this process to the command line which is then handled by the aforementioned PHP binary. This avoids various limits such as max_execution_time.

Once the processing is complete, the user receives an alert:

Similarly if the process fails, for any reason, the user will receive another alert and an exception will be logged with more details in the Server Error Log.

As you would expect, there are options relating to the maximum file size and supported file extensions in the options in the new Video Options tab on the Gallery Options page.

The first change is mostly aesthetic in nature in that it serves to slightly simplify the interface when adding media:

We now hide certain elements on the page unless they are selected, e.g. the album drop down and the image upload URL field. We've also removed the rather sizeable block of quota details into a more subtle banner which includes the full quota details in an overlay.

The biggest changes, however, are slightly more functional in nature. Rather than the familiar grid format, when you are adding media, each media item now has its own row: 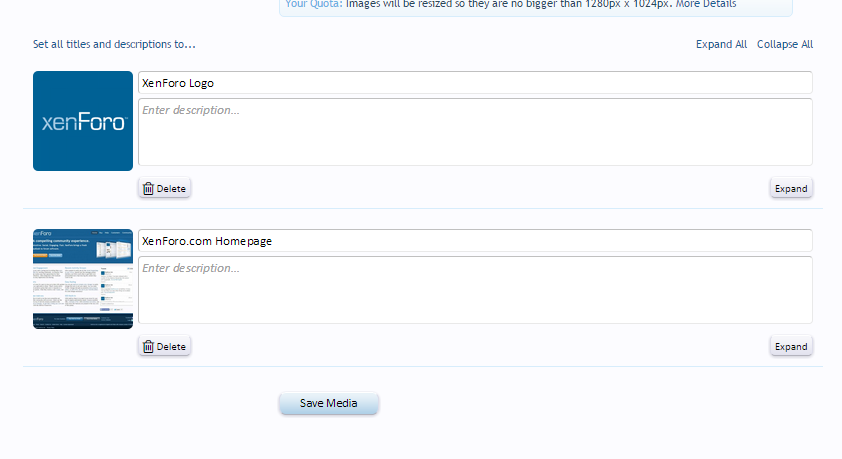 Each media item being added can be expanded to reveal some additional options: 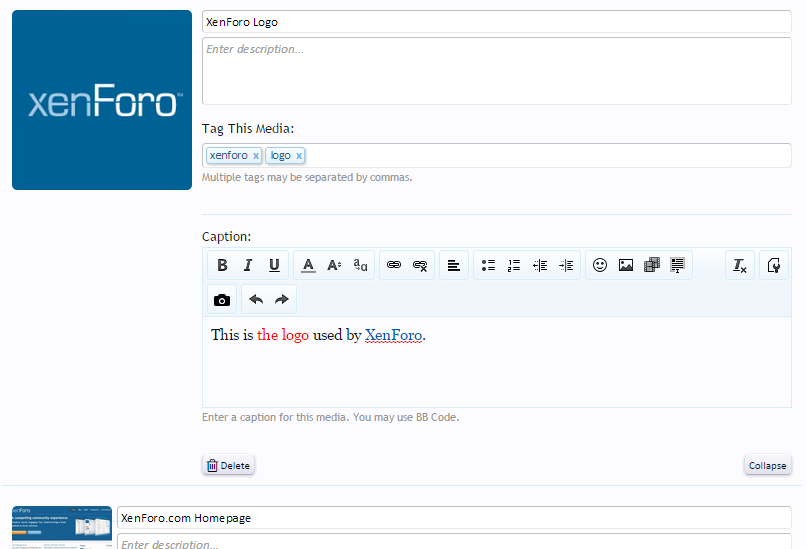 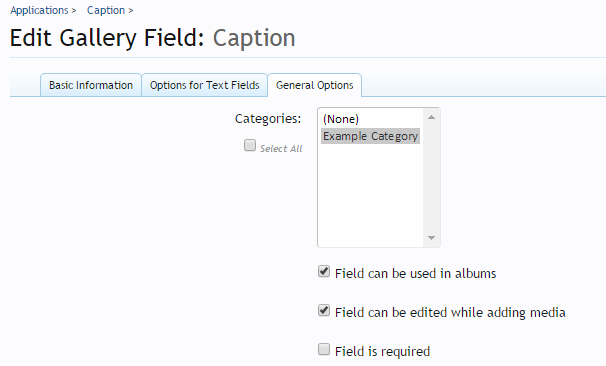 There is also a new option to set a field as "required" thus ensuring a field has to be populated if it is shown.

The changes to the add media form also extend to the edit media form, which is now also where custom fields are edited when adding media. When editing media, all custom fields applicable to the category/album will be shown.

This one is mostly self explanatory - when a moderator is editing or deleting media, albums or comments they also have the ability to send an author alert. 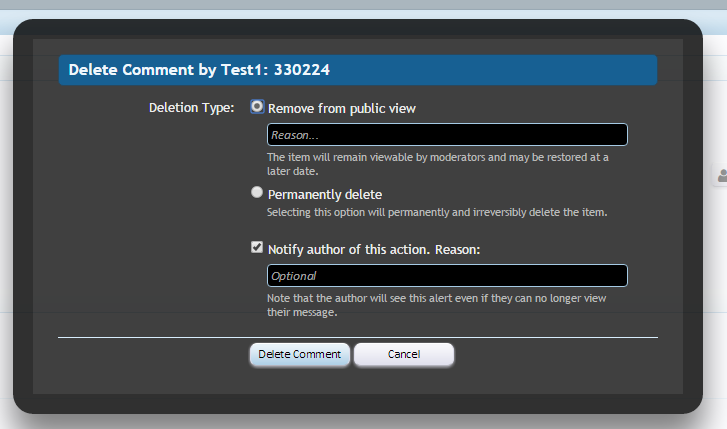 We have redesigned the media/album index pages so that the sorting and filtering controls are somewhat more subtle and simpler to use:

We have replaced the tabs with menus which should allow a more consistent appearance on various devices with different styles. The sort options are the same as you're used to, just accessed from the menu instead of clicking on a tab.

We have added an additional filter option too: 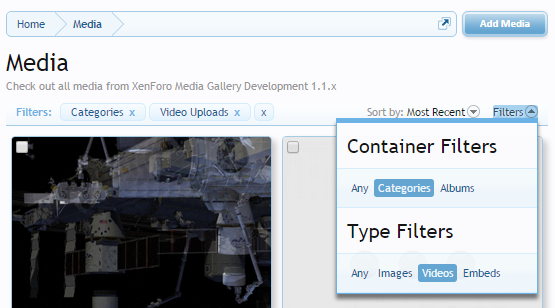 
This HYS thread actually concludes everything we have to tell you about XenForo Media Gallery 1.1. All that's left to do now is to install a preview of the new version here... soon!
Click to expand...

I have not been following Xenforo updates, so please excuse my question. Is there currently a version that now supports video uploads? I noticed that the one being used here appears to, but I am not sure if this has been released to the public yet.

@Chris D is there any plan on improving the User Tagging UI prior to XF 2 ?

Staff member
We're focussing mainly on XF 2.0 so anything else will likely just be bug fixes at this stage.

This thread isn't anything to do with user tagging by the way.

Are there plans to add storage limits on the media uploaded?

For example, administrators could utilize unlimited resources whereas moderators or another group like your community sponsors could only upload 100MB.

Staff member
That has been a feature from the beginning.

Chris D said:
That has been a feature from the beginning.
Click to expand...

Thanks, I tried searching the thread but didn't see it and I'm not familiar with the original version.

It's been in the permission set for XFMG all along
S

When we will see all those features in 2.1.x especially download button?