I realize these are mostly styling changes but as a new XF user I find the implementation of "What's New" to be a bit confusing and non-intuitive. I also find it degrades the mobile navigation experience (due to collapsing the Forum menu) and similarly hinders navigation on desktop (see below). I think a few simple changes could dramatically improve things.

1) "New posts" should be renamed to "Unread posts" (since that's what it really does). I'm guessing it hasn't been renamed for legacy reasons, but this makes things confusing for new users and easily confused with "What's new" (which actually does what it says).

2) Make desktop consistent with mobile. It's bad web design (IMHO) to change the location of navigation items on mobile vs. desktop . The lightning bolt should be displayed on desktop in the same general vicinity as mobile.

3) Suggestion #2 ensures we have a way to access "What's new" (via the lightning bolt) when scrolling and there is no longer a need for "What's new" to take up valuable real estate on the menu bar. This should really be a sub-menu under Forums. That way it doesn't take up space on the Navigation bar but still displays as full text option under Forums (for novices that don't know what the lightning bolt does).

4) After browsing "What's new" on mobile it's very annoying to have to click 3 times to navigate to e.g. Watched topics (must click menu, then click again to expand "Forums" (being careful only to hit the drop down arrow, grrr), then click on Watched). Note that clicking on "New posts" automatically expands the Forums menu on mobile. Similarly, clicking on "New media" expands the media options. Wouldn't it be nice if "What's new" (the default option) worked the same way and did not expand the "What's new" menu? From a usability standpoint the "What's new" menu should never be expanded by default because the user already has those options on their screen (the only reason to click on the options menu would be to choose something else)!

5) Similarly, on desktop if you click "What's new" the resulting page displays the menu for what's new twice (first one is worthless), followed by "home" link (worthless) followed by billboard sized Text indicating the option selected (worthless) followed by What's new menu #2 (only thing we really need since it shows the options and what option is selected and also displays on mobile unlike menu #1). There really isn't any need for the "What's new menu" on the navigation bar. It only wastes spaces and degrades the user navigation by hiding menu options what would otherwise be visible (such as Watched topics):

Get rid of this:

This is much cleaner and displays more options to the user instead of hiding them!

Thanks for your consideration.
Last edited: Apr 13, 2019
Upvote 3
This suggestion has been closed. Votes are no longer accepted.

You can turn off whatever navigation links you don't want using the ON | OFF switches at the right: 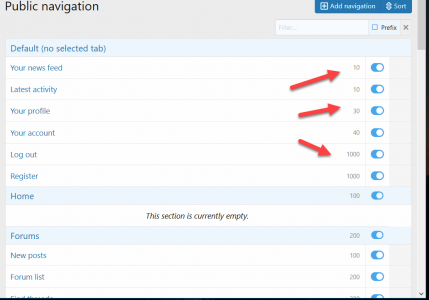 You can also add custom navigation links on the same admin page, or change the labels for existing nav links to make them more self-explanatory to your members. For example, on one forum I manage the navigation bar looks like this (a couple of those links are for addons):

Yes, a good bit of this could be restyled via the Admin panel. Some things might be a little trickier such as adding the lightning bolt for desktop.

Edit: I gave this a try and didn't really solve issue #4.. If you hide the "What's new" tab and make it a menu item under Forums then no tab gets selected when you go to "What's new". This requires more modifications and starts to become a rabbit hole.
Last edited: Apr 14, 2019

I posted something about this today: https://xenforo.com/community/threads/removing-menu-items-from-the-whats-new-section.163851/

I also find it a bit confusing. Trying to clean it up and make it as simple as possible.

I have got rid of the the main what's new tab and just have new post under the forum tab and under the home page.

This works for us because nobody is bothered about new media and resources are rare. Plus we don’t have profile posts.

It is very simple and everyone is happy

But I did have to do a mod so the mobile lightning bolt links to new posts instead of what’s new.

After you disable the navigation link, you can use this add-on:

It's definitely not a perfect solution, but it works and saves some of the headache of additional manual edits.

1.) You can also change "new_posts" in the whats_new_wrapper template to "Unread posts" if it bothers you that much, and then you could change the same phrase in the whats_new_posts template to match. Although keep in mind that there's already a filter there on the New posts page that users can set as the default to show only unread posts.
Last edited: Apr 15, 2019

XF 2.2 Sort threads by most recent? Jump to new?

C
XF 2.2 Links in email from xenforo.com and my forum are doubled