It just feels so wonky. https://www.vbulletin.com/vb5demo/

I remember XF at beta, and it seemed better developed (obviously, that's a subjective view and I have no way to provide any objective, measurable criteria).

vb5 beta has some interesting features that seem to be unique to vb5 (comment system on posts, insert link feature, and a couple others) but...

1) It is so slow (XF seemed like it made a point to be as quick as possible from the beginning)
2) It doesn't seem to make good use of jquery (eg. XF's member profile is brilliant IMO)
3) It seems like it is trying to rely too much on its activity stream (which to me, seems like a bad attempt at a port of a Facebook like structure)
4) It lacks a lot of features that are very much needed (infraction system, reputation, and other essential features for modern forum platforms - however, they may be added in future releases)
5) The notification system is really, really bad it seems. The only way to remove the notification alert...is to delete the notification itself in your profile (unlike how XF does it via cookie, automatically).
6) Clicking on a notification pulls up a single post...with little to no reference as to where it was made. It is a very confusing system (to me anyway).

It's beta. Many changes are coming, I know. But it isn't intuitive, and IMO, modern forum platforms ought to be user friendly, intuitive, logical, efficient.

If both were to be graded right now, XF would win hands down. But many changes are coming, with many new features to be added.

I prefer XF, but because of the unknown future, I can't migrate my existing vb4 board to XF (despite having an XF licence for over a year). And because I don't trust and like IB (the company who owns vb), I can't rush out and buy the beta release of vb5 (that, and because it just isn't a polished product).

I'm hoping XF can survive the turmoil. XF being further developed and supported is my #1 choice for my communities. But if it isn't, then vb5, despite my reservations against IB, will be #2 assuming that vb5 gets a lot of the kinks worked out.

Maybe my server load is less, but it's slightly faster on my install (http://shamil.co.uk/connect).

Gee....may be. I will give it another look once the contents are more populated... But as it stands today it is Fugly.

Btw the vbulletin.com/purchases says vb5 core package includes facebook app. I wonder what kind of app is that.. Anyone knows what that means

Glad I saw this.

It should say something like that: Enter a message with at least 10 characters.
R

Shamil said:
Maybe my server load is less, but it's slightly faster on my install (http://shamil.co.uk/connect).
Click to expand...


Not sure if it's just me but on every page the activity stream partially loads before it's hidden and looks awful. It's much quicker on your site than it was on the demo but still... 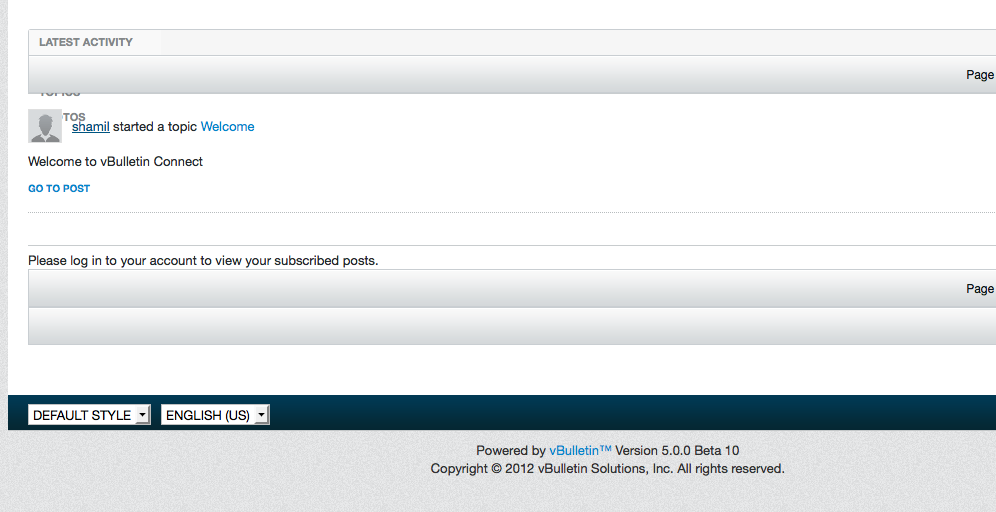 RobParker said:
Not sure if it's just me
Click to expand...

They seem to be rushing it. I wouldn't call that a Beta. Looks like a very eary alpha to pre-alpha test build.

It's..nasty.
It's like a vanilla forum software, yet it takes forever to load.
Digitalpoint posted a comparison of speeds, it's quite shocking

The html output is terrible for on page seo. I opened firebug and my jaw fell at the bloat there was. Plus they apparently have no header (h1, h2, h3) tags on page to tell Google, what the page is about. It's advice Google themselves gives.

My jaw dropped at the forum display menu! It takes you to the #@^&ing content stream! Not your typical thread display listing!

They think they will innovate with this tactic. lol. lol. lol.

ARGH! I can't look at this abomination anymore!

Their ForumCon hype will bite them in the @$$ once this is released. *laughs, and continues to laugh as he leaves*

vBulletin customers will get even more pissed off than that vB4 fiasco. I'm calling it right now: Even more customers will leave in droves at a scale that has never seen before.

I'm sooooo glad I moved to xenForo. As Gordon Ramsey would say: This is just embarrassing.

The ONLY thing(s) I like about vB5 is the post bit. And the ability to put your video on the right column over there. I like that "Post thread" button navi follows you.. That's it.

I would buy another license if I had more money!

If I were excited about it, like I was for VB4 back in the day, I would be very very disappointed right now.

vVv said:
I'm on verizon's lowest high speed dsl connection, your site seems to load slightly faster for me of course.. I guess cause less server load in general... But the vB5 just seems so wonky/ and bloated though, even worse compared to vB4. It's almost like they're compiling various other social site / software into ONE package... Threaded comments too, like wordpress blog software? Facebook tossed in there, deviantart.com tossed in there it appears lol. I really should just go and do the hard work of downgrading to vB3... Or sell off what I can of my vB stuff and get XF license.. xD
Click to expand...

Man i was playing around in there and i was really liking some of its ideas like forums inside of facebook then i started thinking... omg this is a clusterfkk waiting to happen. Reality struck and a pie chart floated up in my mind reminding me of the time i spent attempting to fix my vb4 site after every update...

Guys, I'll go grab a shovel. It's time to dig a grave.

EDIT: I think, to be fair, it might be slightly unfair judging this as we are on a Beta product... I wasn't around at the time, but I assume the first XF beta wasn't this piss poor?

I couldn't have said it better myself. This is it. The end of an era.

Innovation brought to you by Internet Brands.