I wasn't going to post a showcase here as TVTime.Rocks came into being due to me just wanting an niche idea to mess around with styles for and wasn't initially meant to ever become a live site as I co-owned a TV based forum a while ago and due to a number of reasons we didn't do as well as we could have with it and we ended up closing it down.

Over time, the desire to tweak styles turned into a "what the hell, it's a topic I enjoy talking about it costs me nothing to switch on registration" so now it's open and ready for business.

TVTime.Rocks is (obviously) a site to talk about the things you watch on television or streaming services. There's a lot of tweaking gone into the base style (Scratch by @Mike Creuzer and @Jake B. of Audentio) and that won't be stopping any time soon as I add new things and try new ideas out.

The forum layout is separated into two sections. One section is completely open to guests and offers areas for general tv/tv show, streaming and movie discussions. The second section (which really has been split into two categories) is visible to guests but threads themselves are only available to members (while the content itself doesn't need to be hidden, I just thought it would be nice to keep it for members only). This section is dedicated to specific shows and uses @Snog's fantastic TV Threads addon.


Okay, so on to the tweaking examples. We'll start with the forum page.

First up, I'll start with the least unique edit made. Something that's been done for years on sites and I've done many times before, going back to vB days - adding background images and changing colours on specific forums (in this case the TV Show specific ones):- 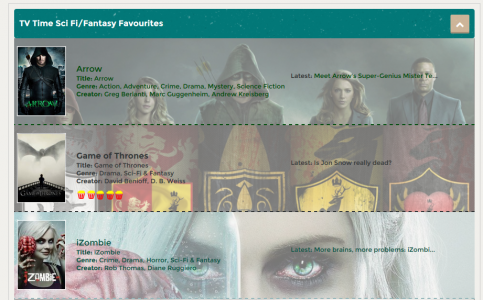 For fun, I decided to give each category its own colourscheme, something that extends to the threadlist inside the forums within the categories as well. I also removed dates and times of the last posts on the main forum list (just to see if anyone cared - FWIW I don't think they do ):-

Finally, for forumhome I originally had a cute little coloured Forum Stats box (which is available in the resources here) 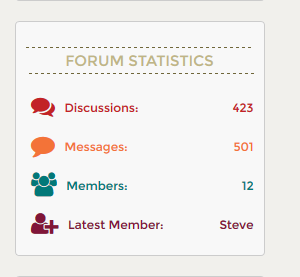 then @TJA offered to move my stats to the bottom of the forum, so we combined the colours with his stats addon and this was the result (and I love it, it's lush!):-

Moving into threads themselves, I first added something we had on the original TV site I co-owned - the ability to add your three favourite TV Shows and the Streaming Services you use. The Favourites has been changed up further than the original format as the original images we had were pretty basic, they look much nicer now.

(There is also Hulu available for Streaming options, and I'll be adding a few others in the next couple of days). Both these are available to choose via Personal Details.

You can also select the show you're currently watching and have it display in your messages (it will only show on mouseover so as not to distract from posts - another @TJA special!)

When you're reading about different shows, you might come across one that you quite fancy watching. If you're anything like me, you'll then get distracted by something and forget what it is, so I've prepared for that by adding the ability to have your own Watch List (I'm quite proud of this as I wrote it myself, with later help from @Jeremy to make the list unrestricted so you can add unlimited shows). This is available in a profie tab:- 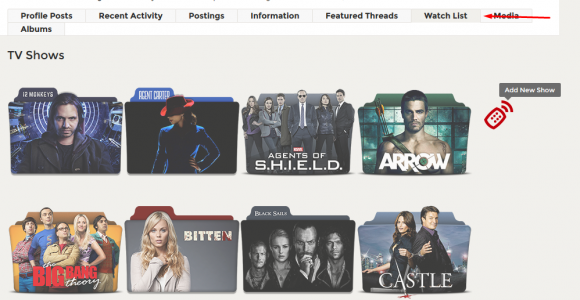 (Ignore the Add New Show image, that's a placeholder for something better when I figure out what I want there!)

Back to the TV Favourites section. I was staring at it and wondering where to take it next and then it occurred to me that I always like to know who the key characters are so I added a Main Character List to each TV Show (using bd Widget Framework):-

(I have expansion plans for this, so watch this space!)

And then I thought about the new Fall season of show premieres coming up and (since I like to know how long before my favourite show will be aired) I decided to add some realtime countdowns to the forums (this is still in progress - finishing them off today):-

Moving on to @Jeremy's fab Events addon, I decided to utilise this as, essentially, a reminder system to display when each season premiere is. I haven't styled the main calendar page as yet, that's still standard, but I have styled Featured Events (which, after lots of brainstorming with @TJA, is now sexily responsive and wouldn't look as good as it does without him!)

The Events page themselves are still a work in progress, but I've tweaked the Title, Information and Location boxes and added @TJA's larger map idea because it looks better. Ignore the FA image next to Title, it's not the final image 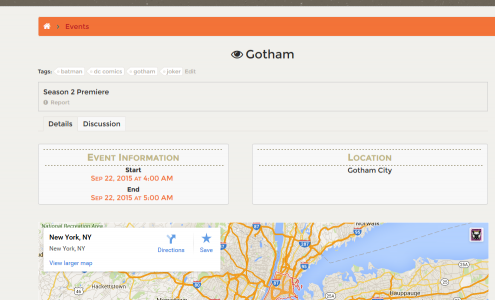 To round up the changes so far (I may have forgotten some as while posting this it's made me realise just how much has been changed lol) let's have a look at Polls. Again, this is a resource I've posted since doing it, but I'll post up the screenshots here again just to make this Showcase complete(ish).

Each section has its own Poll image, just to give polls some eyecandy:-

As well as all that (I've probably missed some things off) we also have a quotations block, media gallery and Featured Threads - none of which I'm sharing images of because I haven't styled them yet

@Lisa has done a fantastic job turning the site into what you see today, it's been fun working with her turning ideas into reality, some stressful moments along the way.

If you love your TV then go check it out.

TJA said:
some stressful moments along the way.
Click to expand...

You mean moments like when we're both saving things at the same time and wondering why the edit didn't take?

Lisa said:
You mean moments like when we're both saving things at the same time and wondering why the edit didn't take?
Click to expand...

Don't remind me, too many wtf moments that day!!

TJA said:
Don't remind me, too many wtf moments that day!!
Click to expand...

But we learned something new, so it worked out in the end Need to figure out the next challenge now!

Lisa said:
Need to figure out the next challenge now!
Click to expand...

The things you do with your sites and my add-ons always amazes me.

I just wish you'd stop because I get flooded with people asking 'How did she do that?'.

Of course I just tell them to ask you.

Snog said:
The things you do with your sites and my add-ons always amazes me.

I just wish you'd stop because I get flooded with people asking 'How did she do that?'.

Of course I just tell them to ask you.
Click to expand...

Lisa said:
I love your addons I need a book related one and music related one now
Click to expand...

The music one already semi-exists. I'm just not happy with the Last.Fm API and the results it returns. With older albums, in many cases Last.fm doesn't seem to have information pertaining to the original album. It just has re-releases which many or may not be the same as the original. So for now, it's on hold.

This is an example of one where I can't seem to pull in the original album info... 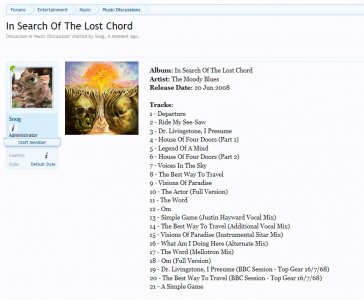 Shame, looks like it could be good as well!

You've resurrected my interest in the music starter and I've applied for an API key to develop from a different (more detailed) API that I just realized exists.
M

The amount of customization you've done @Lisa is truly impressive. I think I read @TJA was helping, so good work both of you.

Thanks Mike @TJA has made sure all the changes I've made are responsive, as well as adding his own touches here and there. He's amazingly patient when I come up with some "what if we did this?" moments, break everything to make it work and then either let's me use him as a sounding board while I work through what I want or quietly fixes the damage lol