i want someone to redo my humor site. you guys possibly interested in a custom job?

i want someone to redo my humor site. you guys possibly interested in a custom job?
Click to expand...

You can send in a request here

Little update on the site. Just in a few short days it has taken off better than we had thought, with 650+ posts and 30 members. Some great discussions for Titanfall going on there along with Media gallery and a wiki ( WIP )

thanks. i got in touch with russ and we're working it out!!

Well been a bit over 2 weeks since we opened the site and must say it has been great with the help we received from others. So just going to show off some updates mostly cosmetic 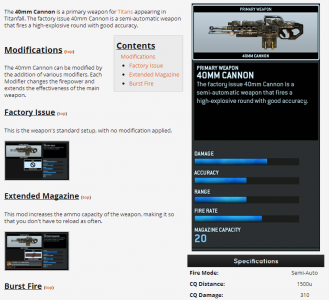 Also his Competitions add-on which we did a giveaway of 1 Titanfall game, 1 Xbox One Titanfall Controller, and Titanfall Art Book.

That is about it for this past week. Titanfall is due out Tuesday @ 12am EST (03/11) so just about 24hrs before release and I think it took off really well, better than any of us had expected!

Almost at 2000 posts in this time since opening, can't ask for anymore than that

Everytime I stop by on the site I am like "wow, nice improvements". Love it. Great inspiration for a new project as well. Best of luck with it!

Another amazing design. Definitely my favourite designer in Xenforo. I'm so pumped for Titanfall so I hope this forum does well.

Are the icons in the profile Xbox, Steam etc Custom user fields or a custom addon?

Are the icons in the profile Xbox, Steam etc Custom user fields or a custom addon?
Click to expand...

All custom fields, well the steam is the add-on we're using but it's just template edits .

Consider doing news hunting and reporting for original content and first reports of upcoming changes, that's what will bring activity up considerably, imo.

Ya we're bringing on some new staff to help with that. Part of developing sites I have limited time on participating in them lol, I do my best though.

CaptainMorgan said:
Is this site no longer up? If it isn't.. that's a damn shame... what a great game TF is.
Click to expand...

We played TF like crazy when it first came out but our interest just fell quickly in it.

I can't really explain it... I thought the game was a lot of fun and definitely felt something unique in it but it couldn't hold my attention .

We're working on rebooting a new little community but not really plans to make it huge or anything.

Yea... they've added more game modes since... which definitely helps. But yea, even the developers admitted guilt when they realized that gamers will play the heck out of the game, but then out of nowhere your interest will fade. They called it, and I agree, the price to pay for trying something new and innovative. That being, answering the vertical challenge. Because it's such a fast paced game, and you can jump over buildings, there was no developed strategy for the game ala Call of Duty or simulation games. For instance, in the latter - the developers could funnel players a certain way around the map, guaranteeing a specific level of play. But with TF, all bets were off and you basically were not subject to the same limitations.

They are promising in 2015 or 2016 a TF2 having learned their lesson - don't give *everything* to the gamer... make them work for it a bit more, and present challenges in the map. Their maps were so open and you can get to the middle of them in a snap, there's virtually no map challenge players face.

I must say that was a beautiful style!

RichardGaspa said:
I think your server is down - See error message I been getting for the past hour

Website was merged to be https://gamesmashers.com
Titanpunch is kind of no more.

Summit said:
Website was merged to be https://gamesmashers.com
Titanpunch is kind of no more.
Click to expand...

Ok - Thanks - Taking a look now