I've got a possible feature... ?
Ideally if a member is promoted to a moderator whilst on someone's Ignore list could they be removed from being ignored all together or at the very minimum not show on the system Ignore list because right now whilst it is technically correct that Member A is/was ignoring Moderator B, it is factually incorrect at the same time (Member A can see Moderator B posts) and the member (Member A) accused of ignoring a moderator (Mod B) isn't actually ignoring them and more to the point can't actually remove them from being ignored because the moderator (Moderator B) no longer shows in that members (Member A) Ignoring list only on the system Ignore list.

So my (system) lgnore list is this one (only visible to moderators).
Moderator B shows on this list as Ignored and Member A in ignored by. 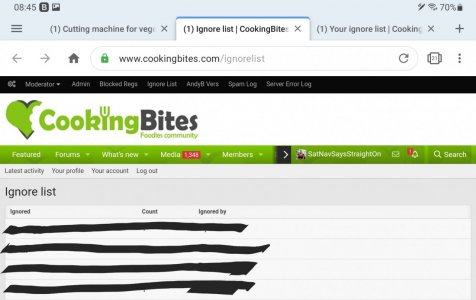 Member A sees this 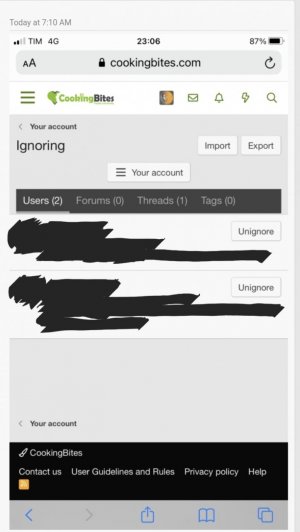 neither of the 2 they are ignoring are Moderator B.

Staff member
I think you have some add-ons at play here that materially affect the behaviour and how ignoring is exposed.

There is no "system wide Ignore list" which I think is probably the add-on that is relevant here.

If Moderator B is ignored by Member A, the record is still in the database but in the default software that isn't actually exposed anywhere. Member A's ignore list will not contain Moderator B. There is no option anywhere for Member A to unignore Moderator B. Indeed as ignoring staff members is not allowed, it's as if they never were ignored.

This is all as designed.

However, you seem to have an add-on that exposes this in different ways, including exposing an "Unignore" option for moderators who technically aren't actually ignored anymore, and elsewhere in the default software would be filtered out.

Ultimately, if changes are to be made here, it should be within the add-on that exposes that.
S

OK. I didn't want to disable the content ignore add-on that allows members to Ignore specific forum or threads because I wasn't sure if it would lose the settings.

This is at the Member level hence why I thought it a feature.
This list also only shows Member ignores not forum or thread ignores.

I know I had to manually add the list to my bookmarks because it was one of those hidden ones... I'll continue digging.
Thanks
S

found it. I had forgotten that I had another one @AndyB made this add-on to show the list. I'll contact him.
Thanks again.
S

In the Accounts, Ignoring page, can moderators still be shown here so that a member can unignore them?
I still have the basic problem that they set this setting and now can't undo it because the ignored member is now a moderator, even though they see the posts.

Staff member
That's not a change we'd be looking to make.

We treat them as if they were never ignored in the first place, so we wouldn't show them in the ignored list and we wouldn't provide an option to unignore them because they are essentially not ignored.

You have an add-on that exposes these things differently. The add-on author would need to make changes. The bug is in their code, not ours.
S

Chris D said:
That's not a change we'd be looking to make.

We treat them as if they were never ignored in the first place, so we wouldn't show them in the ignored list and we wouldn't provide an option to unignore them because they are essentially not ignored.
Click to expand...

I understand. I used to run a large network, building AD servers and network from scratch etc... I'm just very aware that my moderators don't have that knowledge and take what they see at face value.


Chris D said:
You have an add-on that exposes these things differently. The add-on author would need to make changes. The bug is in their code, not ours.
Click to expand...

Yep - I have. Finger's crossed.

*Can be ignored* permission? So we can make moderators un-ignorable.