Issue with smilies following update to 2.2.8

When posting and adding a smilie using Firefox on a PC the cursor position cannot be placed after the smilie in the post but instead is placed in front of it meaning that if you want to continue typing after the smilie it is impossible without moving the smilie to the end of the type.

This doesn't happen using Chrome, the cursor can be placed before or after the smilie, as prior the update. 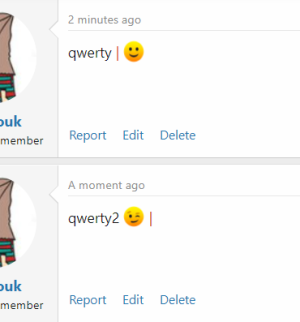 I have one user report the same thing, but I don't know what browser she uses yet

The user reports she saw this in Firefox on Win10 but also in Opera on android.

I found the issue with Firefox version 94.0.2 (the latest version)

I've just had an auto update of Firefox to v95.0.0 and the issue still arises.

If you type in the actual code for the smilie it works as intended, however if you use the 'Smilies' image that's when the issue shows.

Yes, I've noticed that too. Using Firefox here, not tried another browser. Bit of a pita, isn't it?

Just to narrow it down, I'm not seeing this issue in Firefox 95.0 on macOS.

I have tested and the bug is present here on this site using firefox 94.0.2 on macOS 12.0.1 M1
Also tested in ubuntu under parallels on the same mac, firefox 95.0 at first it worked but after clicking after and before the smilie it is not possible to click and get the cursor after the smilie.

ge66 said:
firefox 95.0 at first it worked but after clicking after and before the smilie it is not possible to click and get the cursor after the smilie.
Click to expand...


This is happening actually:

I've found it's not just limited to smilies, but it also affects any picture uploaded .... and the same on this forum....

Are there any updates to this issue @Chris D @Brogan ?

Staff member
We've updated to the latest Froala release. I'm pretty sure I could previously reproduce this in Firefox, but I no longer seem to be able to.

Can someone please confirm and, if you can still reproduce it, please write the specific steps to make sure I'm not overlooking anything?

it's still happening to me:

Yeah this is still here driving us crazy.

When you try to move the "Typing Cursor" it stays where it is you either:

Confirmed utf8mb4 smilies vs my site