Hey everyone just giving everyone a preview of my next style releasing at http://pixelexit.com/

Going to be calling it Core, although I'm still working on some things it's coming along nicely I feel. **Hoping** 1.1.4 comes this week along with the RM release which this will be released shortly after with compatibility for both. So far I've tested this on some major plugins and it looks great.

Anywho... price will be $25.00 along with a $15 branding removal.
My node icons aren't finalized(they're from the xendisConnect release) 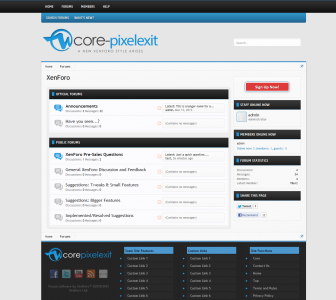 The footer is rather nifty... it's controlled via style properties quite a bit as you can see here: 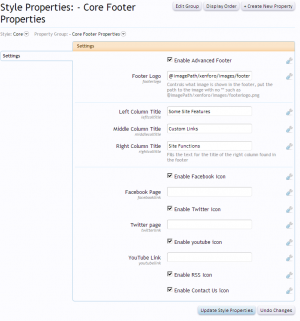 As you can see, a simple toggle will turn on/off the "Advanced Footer". The links for the left/middle column are in their own templates so it's easily editable.

Style works great fixed/fluid, and I'll probably launch with a few color schemes, thanks all for your support so far!

This looks great. Keep up the awesome work.

This one will be used.

stewart1champ said:
This one will be used.


I am all ready to buy as soon as it's released lol for my new project everything is ready just waiting for Russ to finish the skin .

I would only suggest moving the search box down or up, so that an ad spot can be placed above or below it.
R

Just FYI, on an ipad this page is pretty messed up: http://pixelexit.com/community/products/

Just FYI, on an ipad this page is pretty messed up: http://pixelexit.com/community/products/
Click to expand...

That it does... I had to gut the store add on and recode the main page, apparently I didn't notice thanks for the heads up

Eh not quite , just html/css

Looks awesome. I really dig that footer! Agree with mouth on the search box.
R

Russ said:
That it does... I had to gut the store add on and recode the main page, apparently I didn't notice thanks for the heads up
Click to expand...

I assume the blue header is meant to be aligned with everything below?

RobParker said:
Sorry to do this but found another bug (OS X Lion/Firefox)

I assume the blue header is meant to be aligned with everything below?
Click to expand...


Shew off that demo, it's an extremely outdated version it's been fixed , forgot I enabled it on there heh
R

Russ said:
Shew off that demo, it's an extremely outdated version it's been fixed
Click to expand...

Will definitely buy this when it's ready.

Perhaps it would be an idea to sell the footer separately also?

Staff member
Very clean design, good work
You must log in or register to reply here.

Sneak peek at some new styles!

Add-on SSO to Mediawiki via Xenforo