I'll post more about what we've done on the new site later.

We originally had something like 2,200 forums because we had one per country (for discussions) and one per zoo (for photos), but those per zoo forums were removed when we migrated the photo gallery to XFMG as the photo discussion threads are now media comments (which introduced heap of new issued I'm going to need to fix because of a lack of functionality in XFMG).

I did add a new thread prefix selector to the top of the thread list (the one at the bottom is useless - members don't even know it's there!). Thread prefixes are grouped by country and only those prefixes for the country we're in are displayed, so it works well. 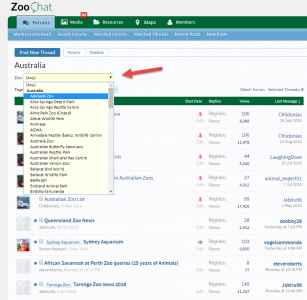 We have 2,216 media categories which again makes the category filter pretty slow in the admin area (I've got a fast/powerful computer, so it's not too bad), but the public navigation works pretty well - I have the category navigation set to "Collapsible" style and it works well although the zoo lists for some countries is very long!

Because we've grouped the zoos by country and then by region, it's not too bad to navigate so many of them. A filter on the public interface would be nice here, but again would probably struggle for performance because of the number of categories. 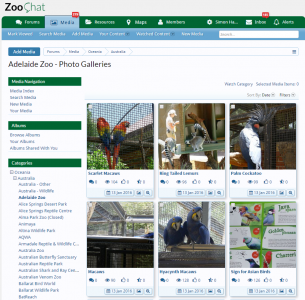 With 280,000 photos in the gallery we found that loading the main media page was very slow because it tried to paginate every photo, so we used the "Only show media added within the last X days (Media Home)" option set to 30 days to improve performance there.

We also found the Recent Comments block in the gallery sidebar was incredibly slow (as in 16 seconds to complete the query!) because it was joining in just about every table and several of those joins (namely those referencing albums) were doing full table scans - and with 280,000 photos that was really slow.

We're not happy with the functionality of that comments block anyway, so I will likely be rewriting it from scratch to be much more useful. We have a LOT of comments in the gallery (345,000 comments for 280,000 photos), and in many ways, commenting on media is more important to a lot of our members than forum posts. My users are pretty disappointed with how unimportant comments seem to be in the gallery section now, so I'll be making a lot of suggestions for improvements in later versions of the product.

I'm going to have to do a lot of modification to the galleries to get the functionality our users want anyway - but none of that is especially related to performance or the large numbers of categories we have.

I should note that we had to migrate to a 12GB Linode (6 CPU cores) to fit all the galleries in (over 100GB disk space required) - so we'll be looking for a solution to move the media back to S3 (I had to pull everything back from S3 from our customised PhotoPost to be local ready for the migration), and we have a separate 8GB Linode (4 CPU cores) running as our database server (3.2GB data in the database, 4.5GB InnoDB cache allocated) and we're running a separate 2GB Linode (1 CPU core) for ElasticSearch. We also use APCu + Zend OPcache on the web server, so we've done quite a bit to help with performance. Even so, I noticed a significant increase in CPU usage on both the web server and database server, but they are still basically idling along nicely.

If I can fix the disk usage issues, I'll be looking to downgrade the web server to an 8GB Linode or perhaps even 4GB - will be interesting to see what happens to CPU load then.

Overall, the users are very happy with the migration so far and I'm surprised (and very happy) with how well things are performing for users. We only have 10,000 members, but they are a very passionate and vocal bunch (nearly 800,000 posts) and we get over 900k pageviews and 90,000 unique visitors per month.

Sim said:
so we'll be looking for a solution to move the media back to S3
Click to expand...

Sim said:
So we're down to 160 nodes, which isn't causing any issues at all - but we've got 1,859 thread prefixes (again, one per zoo) which makes the thread prefix filter in the admin area a bit slow but I've not found any issues with the prefix filtering on the public side.
Click to expand...

If you fancy looking into a slightly more user friendly solution for the thread prefix filtering, check out the "Chosen" library which we use in XFMG.

It changes a standard select input into a dropdown that you can filter by typing into it:

Chris D said:
If you fancy looking into a slightly more user friendly solution for the thread prefix filtering, check out the "Chosen" library which we use in XFMG.

It changes a standard select input into a dropdown that you can filter by typing into it:

Yes, I think that would be ideal - will check it out, thanks.

Just on performance, my old vBulletin v3.8 + PhotoPost site was running on it's own 4GB Linode (the old ones with 4 cores), with a separate database server and was constantly showing > 150% CPU usage on 4 cores. When I had it on a 2 core machine, it was pretty much maxing CPU out constantly. This is with some a lot of caching added too - much of the custom functionality was built around cached data to minimise database lookups - although that probably contributes a bit to the CPU load too.

In comparison, the new XenForo+XFMG version of ZooChat is now on a new 6-core 12GB Linode (upgraded from a 2-core 4GB Linode so we have enough space for the media) and rarely gets above 50% CPU usage.

Note that there are 8 XenForo forums hosted on that same server, including several that get over 1m page views and 100,000 unique visitors per month ... and it's hardly raising a sweat. We're running nginx, php-fpm, PHP7, APCu and Zend OPcache on Ubuntu 16.04

(Those CPU spikes were from when I was doing migration and rebuilding caches - there was a lot of custom migration processing I had to do to move our customised data to the standard XenForo/XFMG structure as well, including moving gallery "threads" to media "comments", which took 38 hours to finish).

Once I offload the media to S3 I'll look at downgrading the Linode and will post stats on CPU usage on a smaller machine. The 4GB Linode with 2 cores was fine previously).

nice work!
Have you considered serving the pictures up from a subdomain and enabling cloudflare for just that subdomain? That way your static content is mostly delivered by a CDN service with nodes all over the globe. That would speed things up for your international users and massively take the load off your server in terms of the number of requests and bandwidth it would have to handle and is really cheap too. I've had very good results with that in the past.

DWJames said:
nice work!
Have you considered serving the pictures up from a subdomain and enabling cloudflare for just that subdomain? That way your static content is mostly delivered by a CDN service with nodes all over the globe. That would speed things up for your international users and massively take the load off your server in terms of the number of requests and bandwidth it would have to handle and is really cheap too. I've had very good results with that in the past.
Click to expand...

I had modified my PhotoPost installation to move the images to S3 and then serve them via Cloudfront.

To do the migration to XFMG I had to pull all the images back locally - the next step is to push them back to S3 and front-end them with a CDN again.

Just putting a CDN in front isn't enough - I need to host the images themselves on block storage or S3 because SSD storage on the VPS is too expensive.