sixlxvi said:
#3) Would you trade your s/o for XenForo 2.3? Happy Valentine’s!
Click to expand...

If only we had some exciting news to digest about the new version... HYS where art tho

Although the team have previously stated that 2.3 would require minimum PHP 7.2, I believe this might be PHP 8.0, judging by the numbers here:

Recep Baltaş said:
Although the team have previously stated that 2.3 would require minimum PHP 7.2, I believe this might be PHP 8.0, judging by the numbers here:

Hope my shared hosting provider gets off their duff and gives me PHP 8. 7.4 is still max in our cPanel PHP Selector last I checked. But I imagine that XF will keep the minimum at 7.4 for version 2.3 just because of situations like mine, even if they strongly recommend 8.x due to the dates you give. XF 2.4, on the other hand...

Recep Baltaş said:
Although the team have previously stated that 2.3 would require minimum PHP 7.2, I believe this might be PHP 8.0, judging by the numbers here:

This feels sensible based on the stats we collect from customers: 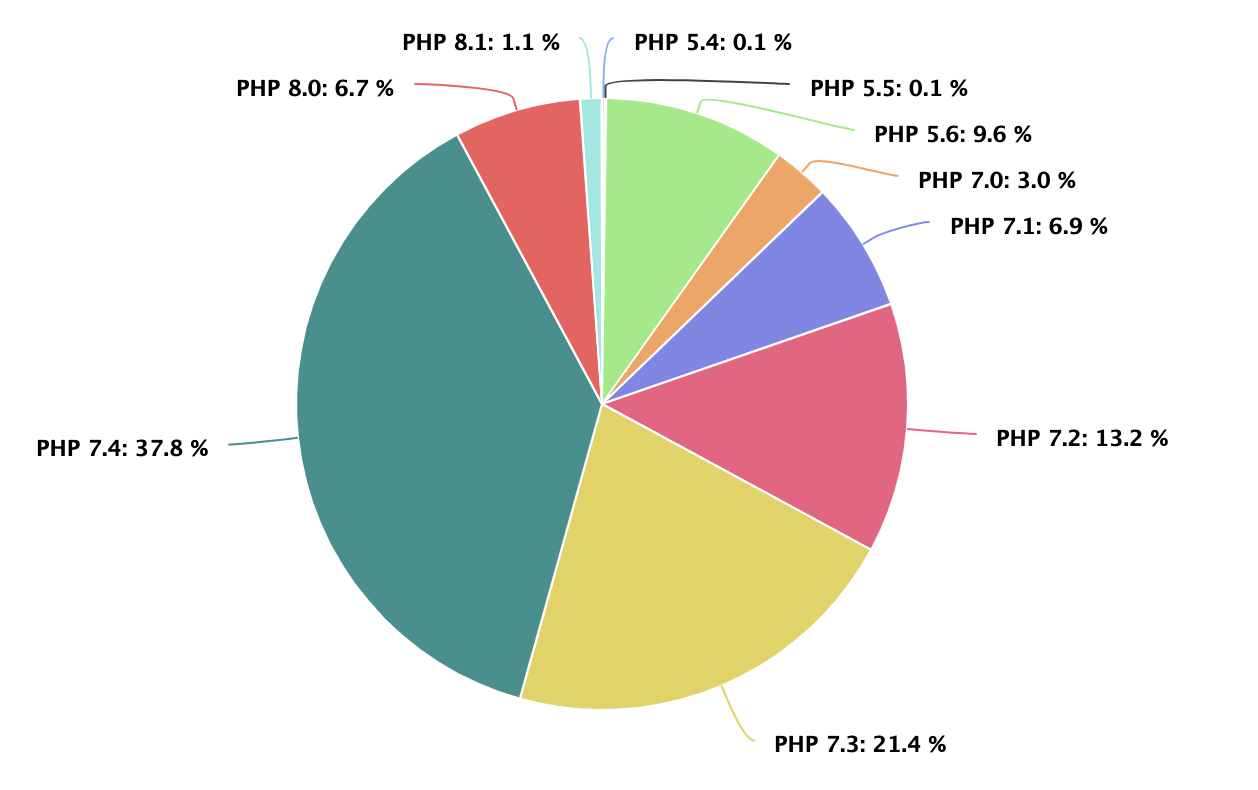 Staff member
That'll be customers who are still running XF 2.0 or XF2.1.

How many are on XF1?

Staff member
We don't collect statistics for any version before XF 2.0.2. Theoretically we could give a rough idea but we wouldn't know if those sites are still active or long-offline. Our best guess is what @digitalpoint reports. That's just under 25%. Over three quarters of our customers are using XF 2.0 or above. Nearly 50% are running XF 2.2.

While we cannot directly verify the exact numbers, they do seem representative and the methodology seems sound.

Shawn might have an updated graph from his not-yet-live 2.x version of the cookie search tool which may or may not have different values.

I don't think there were any updates to how the new version is fingerprinting XenForo versions (at least not that I remember). Regardless, here's what it looks like under the new version (less than 25% on 1.x):

For those curious, the methodology used isn't anything crazy... It's looking at the XenForo/XF JavaScript object, then cross-referencing the version of jQuery being used (which is why it doesn't have a distinction between 1.3, 1.4 or 1.5 [all used the same version of jQuery]).

digitalpoint said:
For those curious, the methodology used isn't anything crazy... It's looking at the XenForo/XF JavaScript object, then cross-referencing the version of jQuery being used (which is why it doesn't have a distinction between 1.3, 1.4 or 1.5 [all used the same version of jQuery]).
Click to expand...

Alpha1 said:
It seems that the percentage of xf1 installs is leveling off and no longer decreasing much.
Click to expand...

I have one last forum on the last version of 1.5 to get over to XF 2.2. Nothing but a series of delays. I'd say it was a comedy of errors, yet it wasn't even remotely funny.

First, we had to wait well over a year, maybe even a year and a half, for a major addon to be 2.0 compatible. (I think XF 2.1 was out before they finally released their updated version!) Then I spent many hours choosing and customizing a third party style to be our default look (as I don't want to look like every other XF forum out there running the stock theme). I also had endless conversations with staff regarding addons to make moderation chores easier, even more addons and customizations to make our Marketplace area (basically classified ads) easier to manage. XF 2.2 added articles, which changed up how I configured Marketplace. Got everything just about locked into place.

Then...on top of all that, towards the end of last year, a major theme and addon developer decided they didn't want to develop addons anymore, except to move a few behind an expensive paywall. This put the whole project on the back burner, lining up replacement addons to ensure there is a path forward beyond 2.2. Also looked at replacing their theme since, honestly, I do not trust them anymore. What's to say they won't yank support for the theme several months from now when their business model changes again? I wish them luck, but we've parted ways.

With as many users and staff as we have, I'm not about to introduce features important to our daily usage, or get them used to a new theme layout, only to have them disappear next time there's an XF upgrade. With a forum this large and this busy, there's more to consider than just running a series of upgrades. It's long-term support. But, things have settled down enough now that I have resumed moving forward with the upgrde. My punch list is shrinking daily and we'll be on the latest and greatest soon. And the jump to 2.3 will be much, much easier to handle.

I mean probably not worth it purely to make it easier to track versions. If you wanted to make it easy, just give the XF object a version attribute or something. But sure, why not? I'm sure there must be an upside to jQuery 3.6 beyond that. haha

Staff member
Hehe yeah tbh we usually review major dependencies in the process of development so it was probably going to happen anyway.

Wildcat Media said:
I'm not too pleased with abandoned/discontinued addons either, but that is par for the course since XF 1.0 first started featuring addons. And I can say that abandoned/discontinued addons were much more prevalent for us in 1.x than they've been in 2.x. In that case, some developers were well-intentioned but a bit wet behind the ears, and some of them apparently evaporated from the face of the earth.

And as you know, it's a hard adjustment when support disappears, and a new forum version comes along that breaks the addon that was deeply entrenched into the forum.
Click to expand...

This is exactly why I run with an absolute minimum of add-ons. There's nothing worse than something like this screwing up my forum.

It's also why if there's a feature I particularly want, and even if an add-on exists for it, I try to convince the devs to integrate into XF with a vote / suggestion thread. Not much luck to date though, sigh.

FTL said:
This is exactly why I run with an absolute minimum of add-ons. There's nothing worse than something like this screwing up my forum.
Click to expand...

This time around, I went with well-established developers. Luckily a few have taken over and I now have replacements ready to go.

The main issue with addons is that there is a lot we want to do with the forum and the default XF features don't quite cover everything, so some of the addons I chose are a necessity. They are great features, but not popular enough that they would be baked into the core. Others are addons we can live without but make the staff's work easier (including @Xon's addons like Warning and Report Improvements, etc.). Some of the addons do minor things like deactivate features we don't need or want, like the "follow" and profile post features--I could remove them with template edits but the addons I use can do that for me. A couple offer performance improvements that are way beyond my pay grade but, again, disabling or removing those won't cripple us either.

I've also written at least a dozen addons for the forum myself, but just about all of them are template edits. When new versions of XF come along, I can modify my own addons to account for template changes. The added bonus is that since I edit no templates, XF upgrades are much easier--no worries about merging templates.

sixlxvi said:
#3) Would you trade your s/o for XenForo 2.3? Happy Valentine’s!

Installment #4 coming soon, unless someone wants to do a guest submission for me

A
Who is your go-to XenForo developer?

XF 2.2 Can I send email notice of new threads/posts to non-member email addresses?