I am trying to set up user group promotions so it will promote members to certain groups depending on how many years they have been registered. For example, I am trying to set it up so the 4 year promotion is removed once they are promoted to the 5 year group. Under the 4 year promotion, I set the 5 year group under "User is NOT a member of the following groups" so the user is no longer eligible for the 4 year promotion once they are promoted to the 5 year group. It has been working once a user logs in and the cron runs, but it isn't working for users who haven't logged in. The users who haven't logged in get added to all of the groups instead of just one. How do I fix this?

Background: This is related to the old thread here: Anniversary Badge / Award - How To Automate? 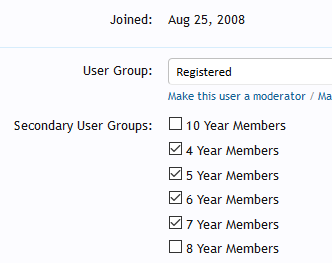 Hey @Brogan , we really appreciate your time with trying to figure this out. We've rebuilt the user groups a few times and have done everything else we can think of to try and get these extra groups removed from the members that haven't logged in since we created the group promotions. Are there any other ways to have XF think the users have logged in recently, or any other way to resolve these multiple groups that aren't being removed?