Thought I would throw up some screens of the new UI.X. Without further ado: 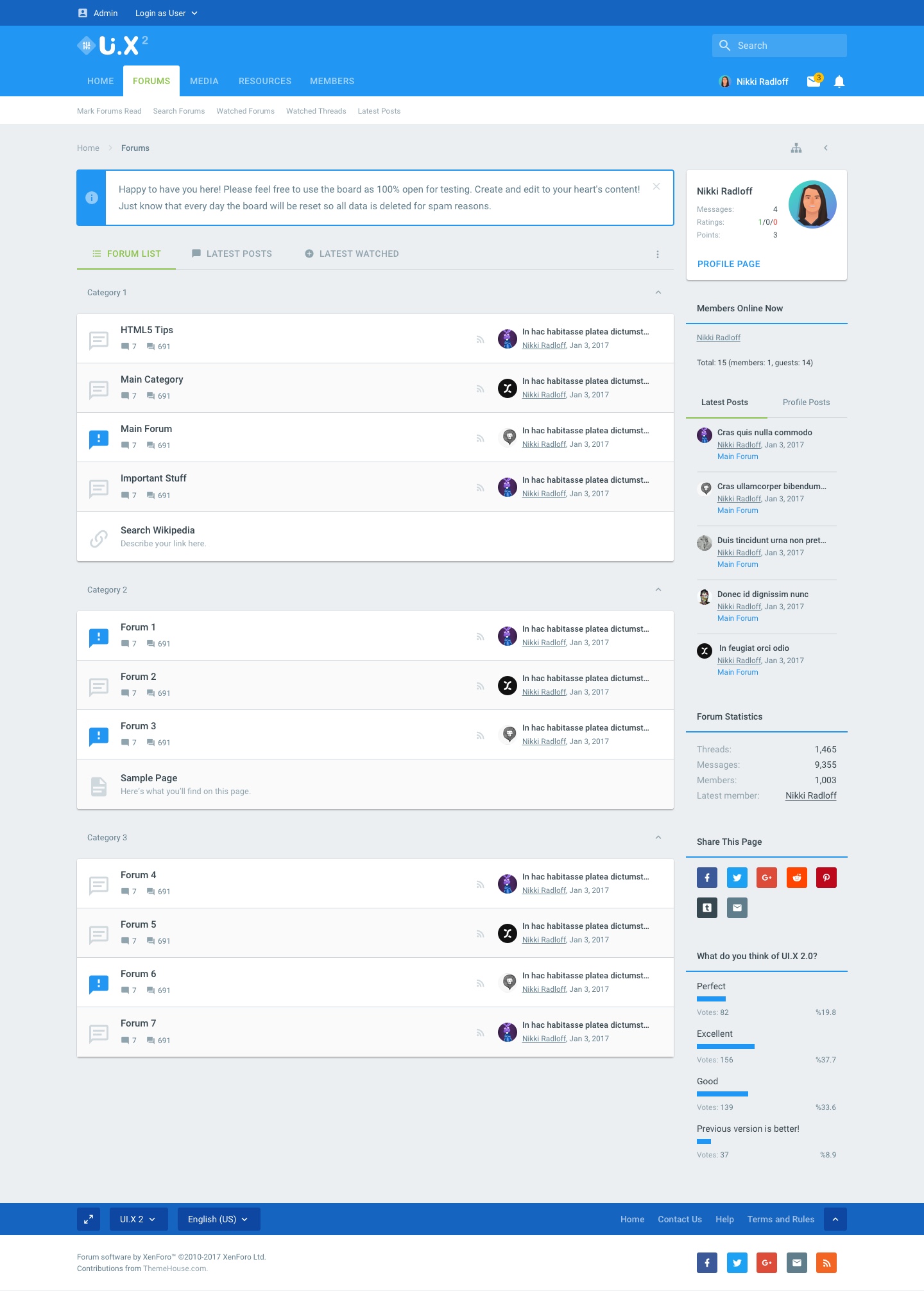 So we decided that there are two types of people, more or less, that use UI.X. The people who want something stable, kind of like the default style but better, but with all the bells and whistles and they can choose what they want or make a custom theme themselves. OR there are are people who, like myself, want just the best of the best. Doesn't really matter what setting is on or off so long as it is the most ideal approach. I at least believe there is a proper way to setup any interface. Everything else is simply wrong. Wether we know the perfect solution or not is of course debatable (and fun to debate!), but our research of doing thousands of forums has leaned towards certain configurations, add-ons, tools, etc being optimal.

And here is where UI.X Pro comes in! 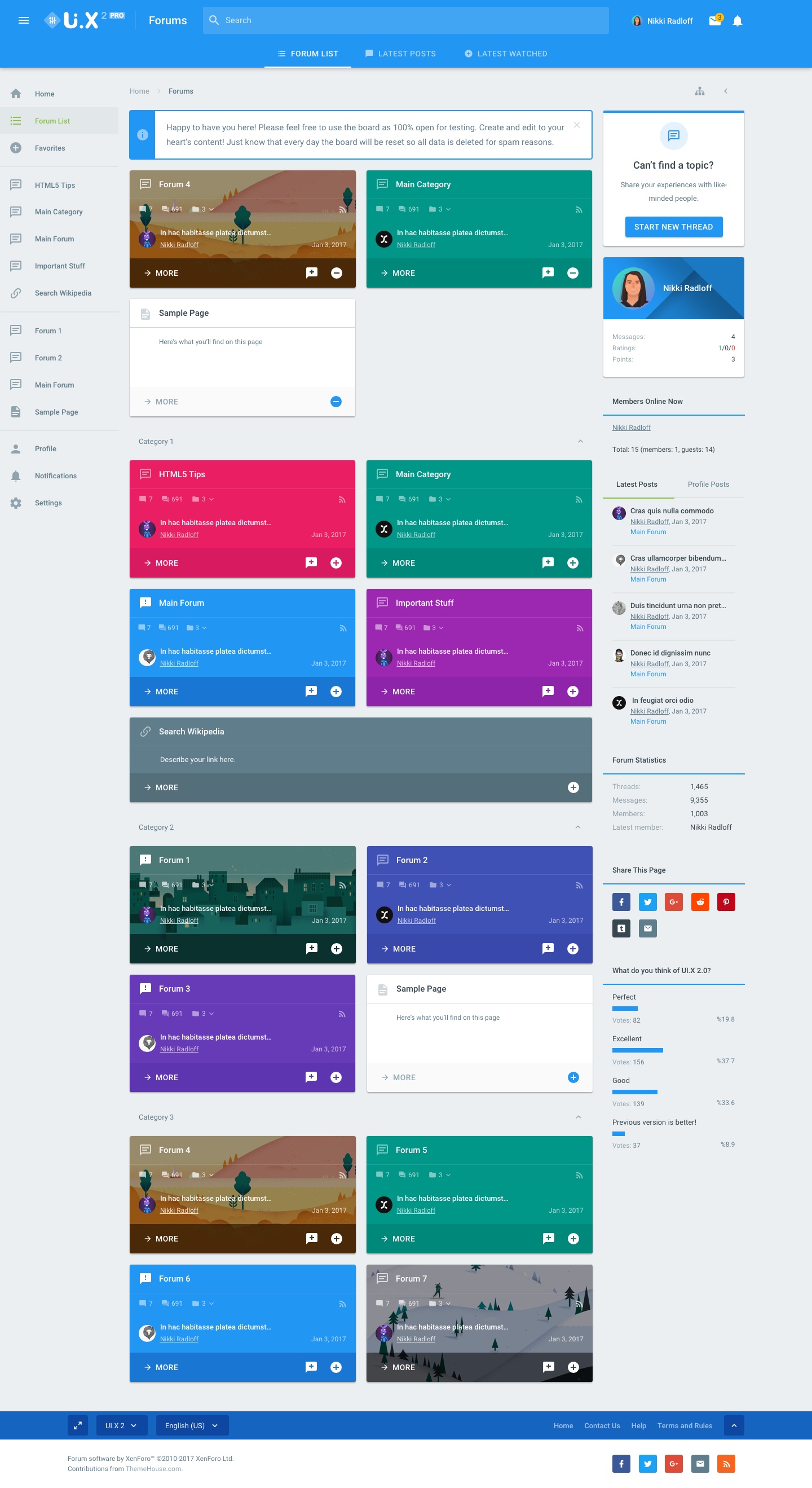 Though a rather large undertaking, we are going to attempt a tag-based node structure, similar to Flarum. 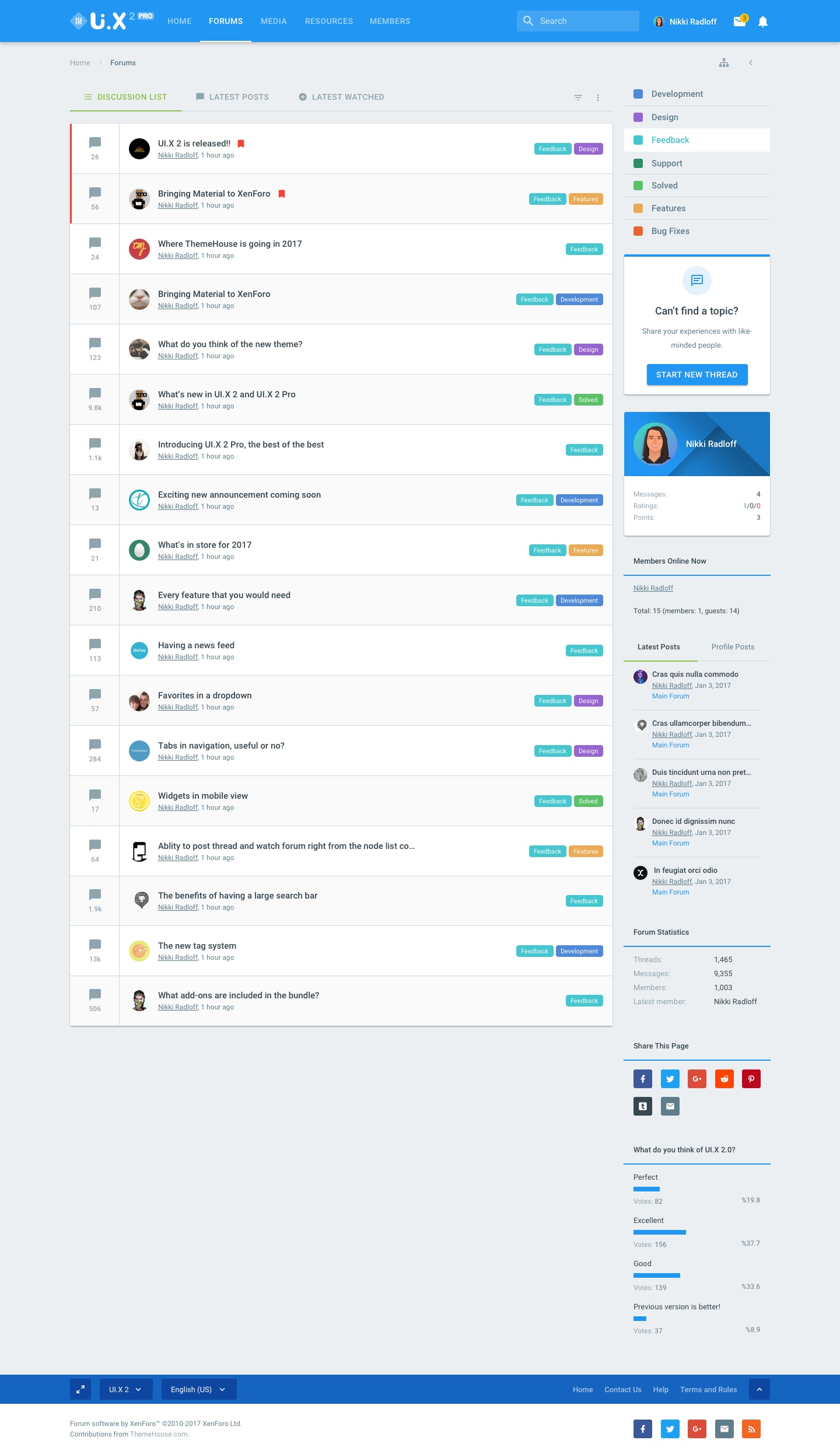 My body and wallet are ready.

Mike Creuzer said:
Though a rather large undertaking, we are going to attempt a tag-based node structure, similar to Flarum.

You win everything. I no longer have to consider converting to Flarum.

I love the tagged based list idea. I've been using a discourse forum a lot recently and I really like how each thread is tagged with a category (or multiple categories) instead of a single node. Plus I have users wanting to cross post to other nodes.

I would love for threads to appear in multiple nodes after being 'tagged' by that node, but this sounds like an interesting hybrid with the existing tag system..

Simply outstanding, Mike! Will UI.X2 be released for XF1 or do we have to wait for XF2 going gold?

Awesome! I want Pro. Shuddap and take my money
C

Is that actually on the dev preview, or are those mockups?

I want pro and the tag based approach is awesome. I am so happy that I decided to use a UI.X style (Xenith in my case) from Themehouse, this is just improving xf by 100%.
But the most important thing I do not get is: you did set a tag "xf2". Will this be a pure xf2 style or will it be available for xf1.5 too?

Thank you, Mike & Themehouse team, it's so beautiful!

Well, I think you've kept my custom quite nicely for XF2 here...

@Mike Creuzer, It's a great improvement.

Looks great! I do have a small suggestion:

Instead of leaving the members online, latest posts, etc. (example) just floating, maybe put them in cards for the sake of consistency? I think it would be a bit of an improvement. Other than that, it looks amazing!

It's just spectacular, Mike! Specially PRO. When should we expect a release?

Mike Creuzer said:
I at least believe there is a proper way to setup any interface. Everything else is simply wrong.
Click to expand...

Solidus said:
You win everything. I no longer have to consider converting to Flarum.
Click to expand...

Well I don't want to promise we can build the tag system, but I can promise we are attempting it.


thomas1 said:
Simply outstanding, Mike! Will UI.X2 be released for XF1 or do we have to wait for XF2 going gold?
Click to expand...

Triops said:
Will this be a pure xf2 style or will it be available for xf1.5 too?
Click to expand...

This will be just XF2. If you want XF1, we have Material. We are refactoring quite a bit in UI.X 2 to make it stable (as UI.X 1 has been the last year+, but building all the features made for an immature product out the gate) right away, so will take a bit of time. How much time I cannot quite say, but we started coding it today.


CarpCharacin said:
Is that actually on the dev preview, or are those mockups?
Click to expand...

These are mockups, coding has begun though and we can post some screens (if I remember to ) of progress as we go.


Yevheniy said:
It's just spectacular, Mike! Specially PRO. When should we expect a release?
Click to expand...

Thank you kindly! I'm not positive on a release date, but we're in production mode!

To be clear, and I know it sounds asinine, I'm not saying I know what 'correct' is. However what I am saying is an important distinction and a bit philosophical. What I'm trying to say is that any deviation, be it a line height or a margin a color, etc. off of what is 'most correct' I am calling that 'wrong'. Meaning even something minor, if done simply because an individual 'prefers' it, if its not backed by evidence to support it then it may not be the best choice.

It's kind of like saying something is either art or its not. A lot of people might argue that art is subjective, and I guess I believe that in the grand scheme of things there is probably (definitely just speculating here ) a right answer to the question. So while I may not know what the most correct UI is for a forum, I have thousands upon thousands of examples of people telling me what they like, don't like, analytics, reports, returns, etc. So UI.X 2 will be based around these types of assumptions.

Of course, if you have a niche user base, then making a child theme and making some subtle changes is fine in my eyes at least, so long as it is marginal.

So yeah, a bit bold, a bit philosophical, but thats the approach ThemeHouse is taking moving forward. I think it creates a better product in the end, albeit a more decisive one. I think people just want the majority of their users happy, a bigger return, more traffic, no one complaining about contrast or color or anything, and thats what we want too for our customers.

@Digital Doctor I am so sorry for quoting you to go on this rant. lol!

Thanks all for the support!!!

WOW! Can't wait!
You must log in or register to reply here.