I have a problem with my custom degin vs. default design. All the CSS elements seem to load again and again when I change between pages on my board, while Firefox is the only one that saves the header in its cache [most of the time].

It looks like the header tries to load its logo and buttons as the page refresh itself, which is bizarre (or I'm doing something wrong).
I don't know if this bug affects this: http://xenforo.com/community/threads/litespeed-sends-text-html-with-css-304-responses.54185/
Since I don't have LiteSpeed, it seems that it is irrelevant to my issue (I have the regular configuration of Apache +PHP + XCache which I tried to disable and no hope for me.)

Here is a short demo that shows the difference between Chrome, Firefox and Safari. It seems that Safari is the worst of the three, and Firefox is the best in terms of caching the header. At the end, I compare it to the default design which loads instantly and caching the header most of the time.

Thanks for the help.
Sort by date Sort by votes

Staff member
This is, to some degree, expected. The default XenForo structure actually has the header at the bottom of the HTML and then uses CSS positioning to move it back up. This was generally done to bring the content itself further up. You could look at reorganizing this if you preferred.

It's hard to say if it's caused by anything specific in your design.
Upvote 0 Downvote

@Moshe1010 I've experienced this a couple of times, not that often though (I blame my internet speed for that issue).
Upvote 0 Downvote

in PAGE_CONTAINER, I've moved this lines: 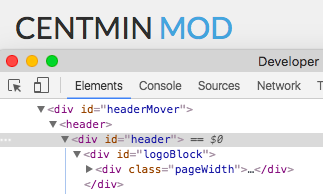