I have max dimensions set to 850 x 850px, and would like the system to simply not allow anyone to upload over this image size. I constantly get help desk tickets claiming fuzzy uploaded images. I have done my best to educate my users but this does not seem to be helping. My best course of action is that if this size is exceeded it will not allow the image to be uploaded, maybe a message stating 'maximum size of 850x850 has been exceeded, please reduce your image size'. Is there any way to do this?

I run a busy artist site and must say the gallery is somewhat lacking when it comes to giving an artist community the best possible quality. So far I've had to hack it to retain thumbnail aspect ratio, and a hack to increase image upload compression from 85% quality to 100%. Now people are uploading files too large and they are being resized to a terrible blurry quality level. I understand most sites are not artist oriented but imo the core #1 priority of any gallery system should be to ensure the best possible image quality. I hope the gallery evolves towards this goal..
Sort by date Sort by votes

Do you have an image within that size which you can upload here to a post (so it isn't resized) and also upload the equivalent 850px image here as it appears in your gallery?

We've not often received reports of image quality issues and if we have they've never been described as quite so severe.

I'd like to see the issue for myself but also test the image uploaded to the gallery with similar settings and limits to ensure it can be reproduced consistently.

We'll aim to see if we can do anything to improve this or otherwise identify the cause. My general expectation is that image resizing should sufficiently retain a reasonable level of quality.

As a side note, what's the driving force behind the 850px limit? Disk space?
Upvote 0 Downvote
S

hi 850px is a disk space image, over 50k images and i don't want things to get out of hand. Here are two files. One was uploaded and auto-resized, the other the member re-prepped the image to be under 850px. The avergae person might not have an issue but it's a site of photographers so it's very noticable for them any time it happens. Not the best example (I've seen worse) but it was one where they re-uploaded after I educated them.

original autoresized on left and re-prepped with no autoresize on right. Open each full in different tabs, flick between them and you will see the autoresize go fuzzy 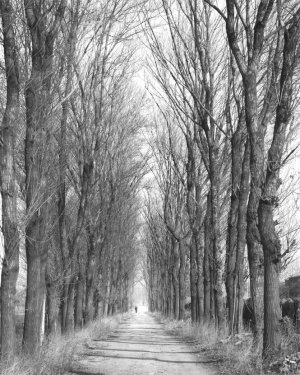 Staff member
The fuzzy one is interesting to see, thanks.

The key thing I'm after, however, is the original image - one that's not yet been resized at all.

This will be interesting because it will enable me to run some of my own tests on the original image to see if I can get the resize quality to improve.
Upvote 0 Downvote
S

Well, I can try to get the original, it's likely a flatbed scan of a print. For my purposes though even if re-size quality was improved 90% there is no way to down size any digital image and maintain the same quality some of my uploaders expect, so I'll still get complaints. They are going from original scans of prints and negatives, then editing those for web, but once another generation of auto-resizing is done there will be loss. The only viable option in my case is to deny uploads over max dimension size.

Here is a good test case for you, a 4x5 chrome, high res film scan (uploaded 2yrs ago pre-xen media gallery). When someone preps a file to this degree they do not want to see it blurry after upload. I have linked it here because your own attachment system might be reducing quality: http://i.imgur.com/EyXMeuR.jpg

So, on the above image I re-uploaded it just now and it was fine, looked identical -so, my adjusting quality to 100% has worked well. But if this image were to be downsized it would of course reduce in quality. My fix at the moment is adding this language next to the upload button:

Upload an image from your files (*ANY IMAGE OVER 850 x 850px WILL BE AUTO RESIZED DOWN TO 850 x 850px. THIS CAN GREATLY REDUCE YOUR IMAGE QUALITY. WE RECOMMEND PREPPING YOUR FILES TO BE UNDER 850 X 850px THANK YOU.)
Click to expand...

Staff member
I think getting the original would still be useful. I agree that the loss of image quality as it stands isn't acceptable, but I also wouldn't necessarily call it normal. Resizing in PHP or Imagick isn't a lossless operation by any means but I'm somewhat surprised at the poor quality demonstrated before.

Ideally for testing we'd need to see a relatively large image in its original size before uploading, and the resulting image after the resize down to 850px has been done.

As for achieving what you asked, I can only mention the following.

We have a config.php switch that sets the maximum pixel count that will be attempted to be resized. This isn't usually used for what you want to do. This is usually used so that sites with more or less memory available can control which images are resized and which aren't.

PHP:
Setting it to the above should reject images over 850 x 850, though note that it's not quite as specific as you're asking for, e.g. it would accept an image which is 425 x 1700. It will also affect all users/user groups and all uploads including avatars and post attachments.

This is currently the only solution unless you have something custom developed.

That all said, I'd still like to try and get to the bottom of the poor quality if you can provide some large, original images.
Upvote 0 Downvote
You must log in or register to reply here.

XF 2.2 Image attachments are not properly resized on mobile

XF 2.2 How is attachment quotas not a basic feature?