XF 1.5 CSS Mystery: Anyone know why this isn't rendering?

I have for about a year now had this bit in my extra.css:

Code:
It puts a little speech bubble FA icon before the thread starter's (OP) username like so: 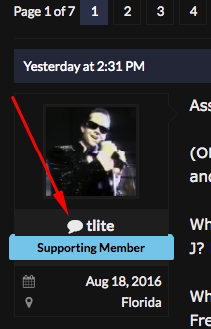 We use @Russ 's XenBase (Flat Awesome+), but it's not a problem with the style as it works just fine in our other styles based on Flat Awesome+ (such as Flat Awesome dark in the screenshot above). It just stopped working a couple weeks ago in our default style and I can't figure out what in the world would keep this little font awesome css bit from rendering. The same exact code is in extra.css in the suspect default style, and all our other styles (where it's still working). All styles have font awesome loaded.

Anyone have any ideas as to how to troubleshoot? I'm pulling my hair out.
Sort by date Sort by votes

Actually I'm not seeing threadStarter load in the html at all on your site, I'd double check the message template to see if the custom conditional is there.
Upvote 0 Downvote

Russ said:
Actually I'm not seeing threadStarter load in the html at all on your site, I'd double check the message template to see if the custom conditional is there.
Click to expand...

You're indispensable, Russ. I forgot that threadStarter is a custom part of xenbase, and accidentally removed that conditional from the message template when I added Brogan's messenger-style conversations

All fixed now! Thank you!
Upvote 0 Downvote
You must log in or register to reply here.

Do I need to know CSS or PHP to run a Xenforo forum?

S
XF 2.1 Is it OK to change template content with child theme?