Most probably I'm just missing some option, but on my site the album itself is not getting its thumbnail generated, it shows the default folder icon instead: 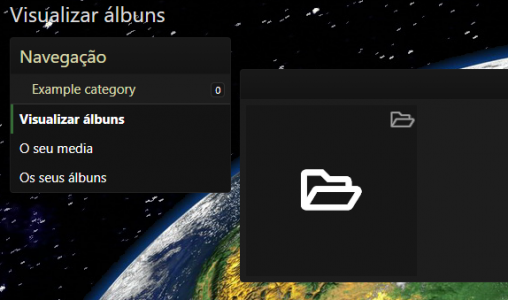 The images inside the album have all thumbnails already generated fine, it's just the album itself that's missing.

I did have to add a line in config.php for larger maxImageResizePixelCount value, could this have anything to do with it?

jprates said:
I did have to add a line in config.php for larger maxImageResizePixelCount value, could this have anything to do with it?
Click to expand...

You can rebuild album thumbnails under Tools > Rebuild caches which should sort it.

Equally, uploading a new item to the album should also trigger a rebuild automatically.

I had already used rebuild caches for media thumbnails, which resulted in getting them created for pictures inside the album only.

Now I tried the second option, i.e. to add another media asset to the album, and voilá, the album thumbnail itself got generated.

I leave with the suggestion you add the rebuild of albuns themselves to the rebuild cache options, since they seem to have been forgotten.

Thanks for the quick help!

Staff member
There’s a separate rebuild to rebuild album
thumbnails already. Maybe you missed it. But glad you got it sorted.

Ah, then yes, I did miss it, glad to know it's there already and it was my fault.