Not sure if this has been touched on or not.. And i am sure i could hide it using .css but that would effect everyone's "last seen".. Of late it's been driving me nuts.. People have noticed that i have checked in on my sites i am involved in and as most webmasters / site owners do they check in on their sites whenever they get a chance.. Now this doesn't mean they have time to reply to threads and pm's at that time..

So i was wondering if there could be a small tweak added that would allow for certain usergroups "Admins" and maybe "Moderators" to tick a select box to remove the "Last Seen" from their profiles ?

Say a tick box within the AdminCP ?

Ive just been getting people being annoyed with me that ive been online but haven't replied to their threads or pm's... I do my best to get to everyone !! but sometimes i do like to just check in on my site and make sure firstly it's still running and secondly that no mass spam attack has happened.. I won't let any PM's or threads directed at me go unanswered but sometimes i may be out or busy or even talking with a client and can not provide the support instantly but once they see that ive been online i then seem to be prone to abusive messages and accused of not taking care of my members etc... I am sure other people has experienced this also and anyone that half knows me would understand that i would not intentionally ignore a thread / post or PM directed at me (unless it was spam or of an abusive nature). It's just driving me nuts of late.

I really hope ive not overlooked this (If so i am sorry for wasting your time) and there is actually a option already.. Ive not looked up any addon's but again if this was a core feature it would be best as i try not to reply on 3rd party addon's.

Regards, Darren
Upvote 0
This suggestion has been implemented. Votes are no longer accepted. 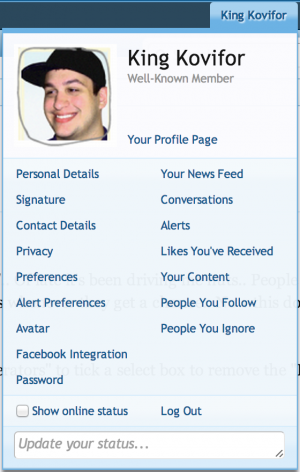 Wow that was lame.. You wouldn't believe the time i spent in the AdminCP looking for such options.. that is when i thought i will make a suggestion on XF it's seems like a feature that would be useful to some people.. and there you have it right in front of my face lol... I can't even blame being tired, I have no excuse at all for this silly question.

XF 2.1 not letting me upgrade my forum

XF 2.1 How does the Report system work

C
XF 2.1 removing the ability to post a thread right on the forum front