License
Single Use License (may be used on one website)

This addon is another tool in fighting spam bot registrations at your forum.


The [OzzModz] Registration Spaminator injects false fields and checkboxes into the registration form which browsers don't render so humans never see. But the bots fill out the fields and check the boxes - identifying themselves as bots and falling into the Spaminator trap. The Spaminator then logs all the information and sends the bots to register-complete, but creates NO account, completely stopping automated spam registrations while ensuring no flags are raised in the bot program. The programs "think" registration was successful and quite often immediately try to log in to the nonexistent account!
The [OzzModz] Registration Spaminator works with and regardless of other anti-spam measures but also makes them all obsolete, proving the worthlessness of captchas, puzzles, questions, timers and the like, by STILL catching bots while all of this annoying standard anti-spam miscellany is still active. And it won't interfere with any custom fields you have on your register form.

[OzzModz] Registration Spaminator is completely independent and doesn't rely on any third-party databases, lists, or IP blocking. It presents more opportunities for the bot to slip and prove it is a bot, for better defense from automated spam. So we can combine multiple checks as opposed to only one CAPTCHA/ReCaptcha and/or a question or two per form. This gives huge advantage to [OzzModz] Registration Spaminator.

Since programs like XRumer have defeated CAPTCHA/ReCaptcha, email verification, Q&A, timers and many other spam blocking techniques, [OzzModz] Registration Spaminator brings a whole new set of checks the bots will fail. 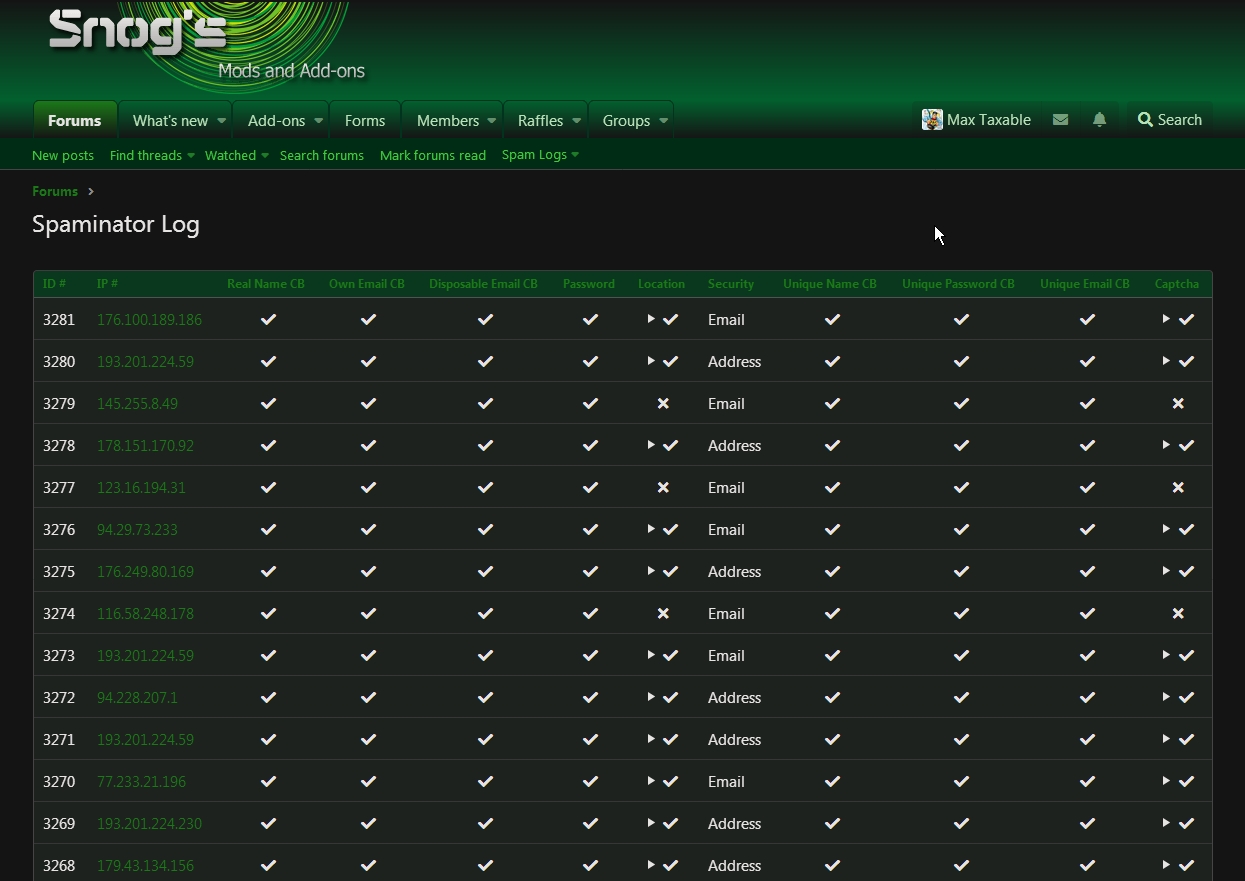 There are many advantages of [OzzModz] Registration Spaminator over CAPTCHA/ReCaptcha, email verification, Q & A etc:

Captchas
A captcha is an image that renders text in an not-so-easy-to-read way, also known as challenge text. By requiring users to type the challenge text into a text field, it supposedly verifies some form of human interaction and intelligence. So if what the user enters matches the challenge text, the user is believed to have successfully completed the challenge and their form submission is allowed to proceed.

But this has been defeated by XRumer and other automated spam programs.

Q&A's
Another option is implementing one or more question and answer fields. For example, a registration form may include questions like: What color is an orange? Humans can easily answer the questions, whereas spam bots supposedly won’t be "smart" enough. Once submitted, the answer to the question is checked, if it’s correct the form is assumed to be submitted by a human and can be handled accordingly.

But this has also been defeated by XRumer and other automated spam programs.

Banning IP addresses
Banning IP addresses isn't reliable because those can be spoofed or reassigned and you might actually end up blocking legitimate users; spammers tend to use dynamic IPs anyway - including common mobile provider ones!

Third-party solutions which use ever-growing databases of known spammers to compare against.
I don’t want to rely on some third-party solution because the fewer dependencies I have on my site the better I’m going to feel about it - what happens when the third party is down? Plus this also has the potential of blocking wanted users as well as unwanted ones and often does. Some people will argue that the added complexity is a necessary evil, but I just can’t seem to bring myself to agree.


All Degrade The User Registration Experience
While all four options are common and can help prevent some automated spam, I don’t recommend them because not only do they often fail - they interfere with and degrade the user registration experience. Often times these challenges are frustrating to deal with and prompt users to leave. Why is it on us, to prove we are human? A good example of that is captchas which output text that’s too hard for humans to read, or when the Recaptcha checkbox fails, now we must complete a picture puzzle? No thanks.

For that reason I always recommend implementing the least obtrusive options available.

Q: Why do I need such a thing?

A: To screw spambots.

Q: Does this do anything about human spammers?

A: No, this works only on automated registration attempts - but the actual human spammer has become more and more rare and is easily dealt with in other ways - most of them which do exist, still use automated programs to register anyway.

Q: Has this been tested at all?

A: Yes, extensively. The [OzzModz] Registration Spaminator has logged over 2 million blocked bot registration attempts in exhaustive testing for five years (on vBulletin and XenForo) on several forums - without allowing ANY successful automated registrations or ever interfering with any legitimate human. It has a perfect 100 percent success service record. It has never failed, never been defeated, never been bypassed and never blocked a legitimate human registrant.

Q: Does this alert any possible real people that their registration has been rejected?

A: No, there are no "gotchas" in the Spaminator, because no legitimate humans will ever see it or even know it is there. Xrumer and other automated spam systems are programmed to flag sites that present warnings, "gotchas" or alerts, even unusual behavior like loading an unexpected page - allowing the human system operator to investigate why registrations are being rejected. This information is passed on to the program developers and improvements are added to defeat the blocks. It's why most every anti-spam measure eventually gets defeated. They rat themselves out! Spaminator does not. Additionally, the rare human spammer mostly still uses automation to get registered. Why tell them what they're up against?

Q: Bots still get through the native honeypots in XenForo's registration form, how is this any different?

A: Unfortunately XenForo TELLS the bot program operators about the honeypots! Both with a "gotcha" on fail AND in the phrases and in the code itself! Small wonder those "honeypots" are bypassed! See above, Spaminator does none of that. We reject the silly term "honeypots" anyway, and prefer to call the Spaminator checks, land mines - they aren't told about them, don't see them, and are going to step on them!

Q: What about if this becomes widely used, won't the spam system programmers easily defeat it like everything else?

A: We shall see, they'll definitely try. But we've not only thought of that, we've planned for it in advance. Many other features for this are being developed and tested, and some are ready for deployment as the need arises. We don't go into battle with just one or two weapons or ideas.

Join the discussion Get support

Not sure why this addon isn't getting much love on here. This is by far the best tool to mitigate spam registrations I have ever used. Very effective and very well thought out. Keep up the great work mate!

ozzy47
Glad you are happy with the addon and that it is helping you stop the spam registrations. Thanks for leaving a review of the addon.
I am already seeing major results from this add-on within mere HOURS of implementing it. This is an important add-on that all forum owners should consider purchasing.

ozzy47
Good to hear you are experiencing positive results already. Thank you for leaving a review of the addon.
Probably the best anti-spam add-on we've used on any forum. We originally tried out this add-on as one of the vB4 testers in 2015, blocking over 700k bots between 2015 - 2019. Since migrating to XenForo, we've sorely missed this add-on, so were pleased to see this now released for XenForo 2. Since installing on our site several weeks ago, we've seen spam immediately drop from around 10+ bots per day managing to register, with most being able to post, down to 0 successful spam bots registering or posting on our site.

For us - this add-on is a must have, and we'd strongly recommend this to anyone with an active site.

ozzy47
I do remember your site back in the XF days, and how well spaminator helped then. I feel it will do as good on XenForo as it did in vB. Thank you for leaving a review.
I've been running Registration Spaminator since May 2019 as a beta tester.
It stops bot registration cold, and makes the job of running a forum much more enjoyable.

ozzy47
Glad it has helped your community finally be free of those bots spamming you. Thank you for the review.
Read more…
Top