An issue with the default registration options has been addressed, and should now work as intended for new users going forward.

This version fixes an issue with the newly implemented Amazon bounce mail handling that could cause a server error in certain circumstances.

Some internal changes and reworks have also been performed to keep this add-on in line with naming conventions for XenForo options.

So yeah, if you were affected by the issue where a server error could occur after the Digest had sent, this version may or may not fix the issue. Here's hoping

Also this version implements special handling for Amazon SES where sometimes they return bounced email with the information in JSON in the actual message body instead of in the headers.

This version makes a few tweaks and improvements to the Digest feature.

It is now possible to test the digest even if it's globally disabled, and the digest will now no longer be delivered to users not in the "valid" user state (or who have been banned).

A server error that was previously hotfixed has now been permanently fixed.

Lastly, the inactivity reminder email toggle will no longer display if this feature has been globally disabled.

Change: Ensure it is possible to test the digest even when the Digest feature is globally disabled
Change: Only show the inactivity reminder email option if this feature is globally enabled
Fix: Fixed an issue where banned users or users with a user state other than "valid" could still receive the digest
Fix: Fixed a server error when attempting to save the email preferences

After a successful Beta period, it's time to release the Gold version of DragonByte Mail v4.3.0

This version contains fixes and improvements for the digest, as well as future-proofing for PHP 7.4 / XenForo v2.1.3.

The most important fix in this version is an issue in which the digest would only show one thread if the administrator chose to limit the amount of threads included in the digest.

Change: Improved the code for sorting "Advanced Sort" threads
Fix: Fixed an issue with the Digest where inputting a number other than -1 in the "Latest threads" box would only show one thread rather than the number specified
Fix: PHP 7.4 compatibility fix
Fix: Only display digest settings if the digest is enabled

This version adds an important feature; the ability to use XF's mail queue system for Mailing List and Digest emails. If your web host places a limitation on the number of emails per hour you are allowed to send, using the mail queue can help keep you within this limit.

This version also reverts the previous change to saving digest criteria, as the problem saving and loading the criteria is actually down to this XenForo bug.

Lastly, a fix has been applied for the Digests where unchecking the "Enable advanced sorting" box could lead to certain digests having limited or no content.

Welcome to the third beta version of DragonByte Mail v4.3.0

This version contains mostly feature improvements and changes to address feedback from Beta 1. The most notable change is that it is now possible to disable BBCode from being included in the Digest preview. In certain cases, BBCode could display incorrectly in email, so if that is a problem for you, you can turn BBCode off.

An incompatibility with Amazon SES with the notification for unsubscribe feedback has also been addressed, among other bugs.

The registration defaults have also been changed, no longer requiring an entirely separate setting. The toggles can be found inside XF's own registrationDefaults setting.

Feature: Added a setting to control whether BBCode is parsed in the digest
Feature: Ability to only include threads posted since the last time the user received the digest
Feature: A date stamp showing the last time the user was reminded of inactivity has been added to the inactive users list
Feature: Ability to override certain email-related registration defaults only if the user opts in to receiving site emails during registration
Feature: The snippet length can now be controlled per content type
Change: Merged registration defaults into the core setting
Change: Inactivity emails will now default to off
Change: Category checkboxes will now be readonly in the digest settings for threads
Fix: Work around race condition where a subscription entry would be wrongly inserted
Fix: Fixed an issue where new digest content or user settings would not correctly take on the default value
Fix: Fixed Amazon SES compatibility with the unsubscribe feedback notification email

Welcome to the second version of DragonByte Mail v4.3.0

A few major bugs were discovered in Beta 1 that necessitated Beta 2 to be released quite quickly.

People upgrading from v4.2 would have discovered that the upgrade did not port the old "Excluded forums" setting correctly. The upgrade step has been corrected, but people already using Beta 1 will need to re-configure that setting in the AdminCP.

Furthermore, a small copy-paste error meant that the digest settings in users' control panel was, in fact, only accessible to administrators. Whoops

Lastly, the digest settings would not save correctly on the Privacy or Account Details pages, this has now also been corrected.

Fix: Fix issue where excluded forums would not port correctly from the old Digest settings
Fix: The "Receive digest" setting would not save correctly on Privacy or Account Details pages
Fix: The digest settings would only work for administrators

Welcome to the first version of DragonByte Mail v4.3.0

This version is focused on improving the Digest feature, adding rich previews for the content being included as well as setting it up to allow more content types in the future.

You can see a preview of how the threads will look here: 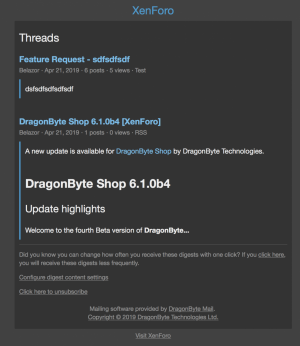 Users will be able to choose which forums their personal digest should pull from, within their access permissions of course.

Furthermore, various bugs reported since the previous version have also been fixed.

Feature: Threads now display a rich preview of the first post, along with other metadata
Feature: Users can now choose which forums should be included in their personal digest
Feature: "User has been inactive for at least X days" user searcher criteria
Feature: "User has been inactive for less than X days" user searcher criteria
Change: Changed the way digest settings are stored to allow for other content types to be included in the digest in the future
Fix: Fix pagination of the mailing list users in the AdminCP
Fix: The Manage Keyword Subscriptions page in the front-end would only work for administrators
Fix: Fixed an issue where Branding Free copies could produce a server error when sending a Mailing List email
Fix: Fix a race condition where a duplicate key error could be generated from the mail tracking
Fix: Fix an issue where certain digest criteria would not save correctly