XF 2.2 XF 2.2 Safari on iphone with iOS 14.7.1: inserted thumbnails and image links are not shown in first post of thread

Hi folks,
I'm experiencing a weird behaviour under Safari (iOS 14.7.1).
If attachments are stored as inserted thumbnails in the first post of a thread, they are not shown. In all other posts of the same thread it's not the case - just in the first one.

On Desktop they are shown as expected in Firefox and Chrome.

If they are not inserted oder inserted as full image, this behaviour does not happen. It affects just the inserted thumbnails.

Update: Linked images seems to be affected, too.
Update 2: On iPad (same iOS version): No problem, on iPad (older version: No problem.
Update 3: Google Chrome on the same iPhone: No problem.

Looks like an issue on small displays with Safari on iPhone with iOS 14.7.1 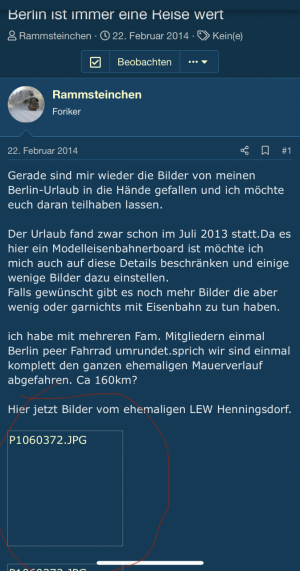 Staff member
Can you reproduce the same issue here? Please feel free to try it in our Test messages forum.
Upvote 0 Downvote
W

No, I can see it on the mobile phone.
just for the background: I'm in then middle of upgrading from XF 1.5. and not yet on the live environment.
Upvote 0 Downvote
W

I've tested it in different mobile scenarios: Only with Safari on iphone (14.7.1), I can this reproduce.
Could this be images proxy related?

After disabling all image proxy functionalities: It runs.
I have removed all Safari Caches afterwards, reinstated the proxy and now it still runs.

I'll watch this closely.
Last edited: Aug 12, 2021
Upvote 0 Downvote
You must log in or register to reply here.

Duplicate Drag and drop image does not insert at correct position, shows at top of text