Fixed Widget with memberstat not showing

I'm trying to do the following:
Certain forums are restricted to a small group of users, since confidential documents are being discussed. For optimal transparency, we'd like to display in a widget which users have access to the forum. My idea was to create a memberstat based on group membership and then to add a widget on the sidebar with a display condition ($xf.reply.containerKey == 'node-xx') for that specific forum. 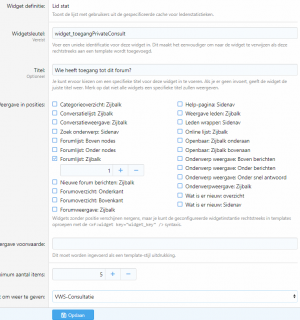 The thing is, the widget isn't shown. If I select a different memberstat to display, the widget shows. Is this some kind of caching issue (the memberstat is newly created) or is the amount of users in the usergroup somehow a limitation (in this case for example: around 25 people)?

Also it's somewhat of a workaround since now this memberstat also displays in the members-section, which we preferably don't want.

Any (other) way to accomplish this?

Some debugging myself, noticed that I can get it to work with the second option checked for the memberstat:

It appears that deselecting the second, prevents it from being used in a widget.
Last edited: May 11, 2021

Staff member
Can you paste a screenshot of the options in English.

Staff member
Thank you for reporting this issue, it has now been resolved. We are aiming to include any changes that have been made in a future XF release (2.2.6).

Allow member stats to be used in widgets regardless of overview_display option.
Click to expand...