It appears that users on Android devices are telling me that they are unable to attach more than one photo to a post at a time.

Here's what one member said:

I'm using Pixel 2 with latest Android version and chrome. For a good while now, I can't add multiple photos all at once to a post from the phone (this works fine on a laptop).
Click to expand...

Same problem on mine for about the last 6 months. When uploading from Google Photos I can select as many as I want, but only one will upload.

However, if I am selecting locally from the phone, I can select and upload multiple images.
Click to expand...

One of the users sent me a screenshot.

He said he can select as many files as he wants to upload from his local photo library on his phone, but when trying to select multiple photos to attach from his Google Photos, he selects multiple photos, but only one will upload.

Staff member
Are they uploading from this button? 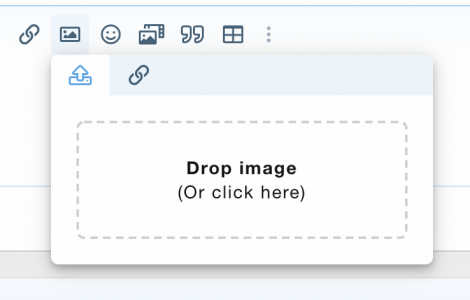 If it's the former then that is not expected to work because, unfortunately, the built-in rich-text editor functionality does not support multiple file uploads.

If it's the latter then it should work without issue (and does in my testing).

Chris D said:
Are they uploading from this button?

If it's the former then that is not expected to work because, unfortunately, the built-in rich-text editor functionality does not support multiple file uploads.

If it's the latter then it should work without issue (and does in my testing).
Click to expand...

The second one is the one they are having issues with (the "Attach files") button.

I have an iPhone, otherwise I would test it out myself.

Staff member
A couple of comments mention Google Photos specifically. Is it exclusive to multiple photos selected via Google Photos?

For example if the images were stored on the internal memory of the phone does it work?

When I click on "Attach files" I get "Choose an action" and one of those icons is "Files" from there I can go to a menu that says "Open from" and there are options like "Images" and "Downloads" and these work fine. But if I go to "Google Photos" selecting multiple files there only uploads the first.

This test is entirely written in HTML and JavaScript. Tap "Choose files" and pick two or more photos from Google Photos.

The expected result is this:

On Android via Google Photos, the actual result is:

I presume your users will experience similar results. If so we'll have to close this but seeing as I've written the POC now I'll try and get it reported to Google so hopefully they'll fix it in future.

Just a note: no files added via that input on that page actually gets uploaded to our server. It's all client side and simply reads back the file names that have been added.

I asked the two users who are experiencing this issue to upload screen sharing videos of them going through the process of doing whatever it is they are doing so that I can see the problem in action. One user mention the problem is with Google Photos, but the other user is saying it's both Google Photos and local photos.

Hopefully I hear back from them shortly.

Staff member
If they could test here too that would be useful: https://xenforo.com/bug-poc/multi-file-upload.html

Chris D said:
If they could test here too that would be useful: https://xenforo.com/bug-poc/multi-file-upload.html
Click to expand...

Both have now confirmed that it is only happening via Google Photos, so it looks like the issue is indeed on Googles end. Sorry for the false alarm!

Changing the way Media is Uploaded

I
More options for attachment mirroring