User Status Ribbons (based on Usergroups)

Saeed said:
Confirming that this still works with 1.1.0 beta 1.
Click to expand...

Thank you for this.

The Pet Board said:
Can you turn this into an add on? This is awesome!
Click to expand...

I agree, this would be so convenient for me!!

Just curious, did anyone ever take up turning this into an add-on?

I'm a total CSS newbie...
How could I add an image next to user title? (see for example the star in the attached image)
Thanks!

For anyone who wants to use this a little easier, then you can use this quick mod I did, which enables you to use Jaxels user ribbons and control them via the style properties. I included the ability to have four controlled... not sure anyone would want that many, but four nonetheless.

Still have to do template edit in message_user_info, add:

Then install the attached .xml as an addon.

This won't matter what XF version you run, as its styled uniquely using its own templates, so upgrades won't affect it other than the template edit above, which I find easier to manage than dumping lots of code into a template directly. 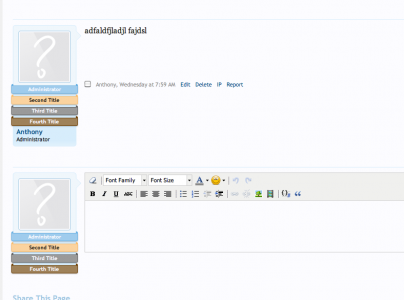 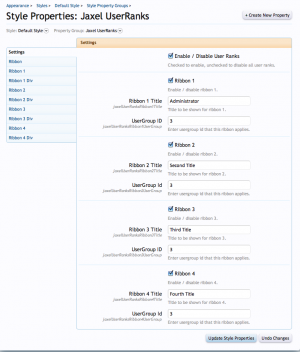 I did try to achieve this using the hook system, but couldn't work out how to parse the correct parameters when using hooks, which aren't otherwise required using template edit directly.

If anyone knows how to solve that one, then this mod is also posted @ http://xenforo.com/community/threads/have-no-idea-how-to-get-mod-working.23345/ with the hook in place, that produces the error noted on that thread.

Great job! I might add that, very useful indeed!

Would there be a way of issuing ribbons to people based on either their username or user id, rather then just usergroup?

DaveL said:
Would there be a way of issuing ribbons to people based on either their username or user id, rather then just usergroup?
Click to expand...

Well, that can be done, but if you wanted to do that through this method it would be impracticable, because every userid would require an entire field component for "active" "userid" & "rank title".

If you had specific users you wanted to add, then you're either better off to add them to the template directly, or if you had a small group of users, put them into their own usergroup and assign.

Getting specific with userid's is really outside the scope of use for style properties, and more you're heading down the road of a much further indepth addon that links directly into user permissions, allowing you to just check a box beside a user to use a specific userrank you have created through the system, assignable on a per user basis.

This edit of Jaxels never really accounts for such in-depth requirements, nor style properties system.

I think that is more something that needs to be included in XF itself... then the rank styling is modified.

Is there any way I can add more ribbons using Anthony's addon (currently it has only 4 ribbons)? I have more than 4 groups of supporters (each for a topic area).

Excellent effort everyone - now installed ... many thanks.

MrC said:
Is there any way I can add more ribbons using Anthony's addon (currently it has only 4 ribbons)? I have more than 4 groups of supporters (each for a topic area).
Click to expand...

How many are you talking about?
M

I think I need about 8 ribbons: 1 for admin, 1 for smod, 1 for mod, 4 for supporters, 1 for vip . There are more supporter groups but I can try to squeeze them into 4 groups.

Leave it with me and I will add a further 4 to the above. Just need a few days though, as I literally just got off a 24hr flight from NYC to Melbourne and have a tonne of things to do, and get sleep... as I had a technology break during our holiday.

Thanks Anthony, I too have more than 4 user groups I want to use the ribbons for. So this will be a welcome addition.

Anthony, not sure if its perculiar to my installation of your add-on or not, but I've got a problem with ribbon 2 resetting its colour settings if I alter ribbon 1's settings:

Just thought I'd mention it if it's a minor bug?

GeeksChat said:
Anthony, not sure if its perculiar to my installation of your add-on or not, but I've got a problem with ribbon 2 resetting its colour settings if I alter ribbon 1's settings
Click to expand...

I just installed this into 1.1, repeated what you outlined above, didn't affect anything.

Anthony Parsons said:
I just installed this into 1.1, repeated what you outlined above, didn't affect anything.
Click to expand...

Ok, the above is updated with V2 of Jaxels userranks, which now contains 8. 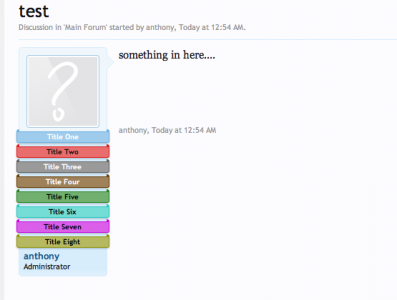 Thanks Anthony and Jaxel. I'll be installing this mod when I've migrated to XenForo.
You must log in or register to reply here.