Regarding sudden removal of some of my addons

Just letting everyone know that a bunch of my addons were removed from my resources listings, not because I removed them, but because of capricious behaviour of administration. I only found out based on reports by PM from others, not from administration.

This has meant that those addons, with their long discussion lists and their reviews and history, have been erased, and are now no longer transferable in the future to another party to continue developing them, as was my eventual intention. This is a sad event, was unnecessary, and has not benefited the forum community.

This finalizes my intent to leave the forum space. My promises regarding my TAC addons (and post guard 2) have not changed, out of respect for Tenants, despite the delay due to my extreme busyness in other important matters, and I'll notify once they're complete via the remaining layer of decentralization still intact on the internet: mailing lists.

You did have your signature stating that you have left the forum scene, you were absent from here and the addons met the housekeeping criteria for removal, so it is not like the staff removed the addons just to have something to do for that day.

Don’t play the victim in all of this, the victims are the customers that you left hanging out to dry.
Last edited: Feb 20, 2019
H

Yugensoft said:
Just letting everyone know that a bunch of my addons were removed from my resources listings, not because I removed them, but because of capricious behaviour of administration. I only found out based on reports by PM from others, not from administration.
Click to expand...

It is well known that developers have to login at least once every 3 month to have their resources listed. It is not the fault of "capricious behaviour of administration" if you leave your resources alone.

You may also not know that you can have all your add-ons relisted and reinstated by a simple request to XenForo if you still want to maintain them.

But why did you even take over all the add-ons from @tenants if you had no intention to maintain them, but let them die?

Staff member
When a developer releases their add-ons here and makes the decision to charge money for them, some level of commitment needs to be demonstrated to both their existing customers and new customers who may purchase the add-ons in the future.

Before today, you hadn't logged in here for over 6 weeks, and approximately the final thing you did before you last logged in here was change your signature (which you have now removed) to:

Exiting XF / forum related involvements. Pending TAC conversions will be done before so. Subsequent intent to dispose of all add-ons. Best regards.
Click to expand...

With the above signature in mind, some people were calling for the removal of your add-ons much sooner. However, we do appreciate that there are occasionally unforeseen circumstances and genuine reasons for extended periods of absence and therefore it seemed reasonable to allow the full limit (which is around 6 weeks).

We never want things to get to this point, but I am sure you can appreciate we have a duty of care to our customers so such actions are necessary. But, the housekeeping decisions can be reversed. Nothing is lost, all of the resources are still there, all of the reviews, all of the forum threads are all still available. We just need to undelete the resources.

So, as an alternative to your request to delete your account entirely, we will happily reinstate them all in their entirety as long as there is a renewed commitment to supporting and development. To be clear, although our cut off point for housekeeping resources is 6 weeks, visiting at least once per week is much more acceptable.

If you want us to undelete them, just let us know.

@Yugensoft I don't think there was any ill intent or anything personal so I hope you aren't taking it that way, things happen and most people understand that. I think as long as there is a path to transition and you maintain at least a minimal presence here (as Chris stated, by just logging in once a week) then these addons can be kept up and available until you are able to pass them on to someone who can continue to maintain them. They are great addons.

@Yugensoft we bought an addon from you and ran into several issues with it. Server errors, users couldn’t even register. We asked in the resource thread with no response, I’m curious but did you just expect to be able to sell broken addons with no intention of responding without XF stepping in?

Russ said:
@Yugensoft we bought an addon from you and ran into several issues with it. Server errors, users couldn’t even register. We asked in the resource thread with no response, I’m curious but did you just expect to be able to sell broken addons with no intention of responding without XF stepping in?
Click to expand...

That’s what is strange, no support in the addon threads, but yet replies to an email stating the addons are no longer listed for sale. So there is no issue receiving emails, which means that the emails sent from here for replies in the threads should have made it through.

Alright I understand, this is fine.

Also @Chris D , the definition of "dispose of" means both "throw away" or "giving or selling to someone else". Perhaps my tone in the OP sounded a bit annoyed, but my primary concern was that the addon pages had been wiped out, specifically because the TAC addons were not my original creation and I wanted them to live on (i.e. eventually handing over to a new owner).

I'm relieved they're only soft-deleted. I have no problem with the fact that my addons are no longer listed.

For others, as a bit of insight, the effective hourly rate of what people are expecting is in the ballpark of a few dollars an hour. That's after the expectation that I cater for fixes for interactions with 3rd party addons, XF core changes (according to one customer, 2.1 broke some things), providing customer support in cases where they misunderstand the documentation, etc, and factoring in the depth of the market, on top of the original development and deployment time.

I'm not saying there's anything wrong with that expectation, but only that given I don't live in a country where a few dollars an hour is what developers are paid (usually more than 10x that), I'm just pointing out it's not tenable.

And as a reminder, @HWS, I was awarded ownership of the TAC addons because no other developer would put their name in the hat, and Tenants didn't want to open-source them since that'd defeat the purpose (spammers would be able to see how to circumvent them). I did not know the condition of the addons, the relative size of the XF market, and how much work it would take to convert them over to XF2 at the time. It would be plain unreasonable of me to prioritize this work over other things.

Frankly, the fact that XF chose to burden everyone with large breaking changes between XF1 and XF2 was an unwise business decision in my opinion -- no big forum owner I'm acquainted with felt that the extra benefits of XF2, which are very slim in their opinion, have outweighed the addon/theme rework costs. It would've been wiser to follow the lead of WordPress, and gingerly rework upwards, with no breaking changes. And as a developer, I disliked XF2 as it runs massively slower on my machine during development, and they decided to balloon to high levels of object-oriented abstraction, in the vein of Java, which I feel is out of date with current developmental trends such as functional programming and immutability, and the few developer-friendly things they added I'd already scripted anyway. Loss-causing breaking changes for customers; having to relearn a now heavily abstracted and esoteric system for developers; but basically the same software. Not great -- my guess is a classic case of engineers overpowering managers.

Going forward, I intend to open-source my remaining free addons (and some low-price originally paid addons) so other forum hobbyists (of which I'm no longer) can continue to receive benefit from them or work on them; and will be disposing of the others once I finished pending work items and find a willing developer to take them over.
Last edited: Mar 1, 2019

You came into the XF marketplace at a very inconvenient time. XF2.0 was just released and did not offer the compelling reasons to upgrade that xf2.1 does. Most major addons were not available for XF2 yet. So at that time there was very little market for xf2 addons and not many were willing to invest too much in xf1 addons with xf2 around the corner. When you released your Stripe Full addon many admins requested a XF1 version instead. Its only now that big forum owners see the benefits of XF2 and many are working towards upgrade. You can see the XF2 adoption trend here: 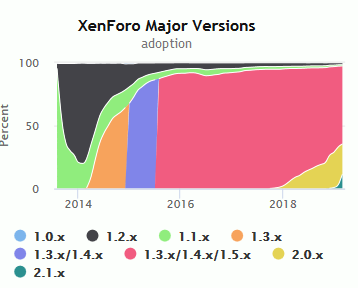 I'm pretty sure that things would work out very different now and especially in at the end of the year when the bulk of forums have upgraded.

Take your Stripe Full addon for example. Many people have asked for this functionality and need it because core XF payment methods do not work for many countries. Even XF itself gets countless requests to pay for licenses with these payment methods. It was very disappointing that XF did not implement it in core. So you have an addon that offers functionality that is in high demand, but that is not bringing in income. Because when it was released it was for a platform that people were not using yet. And after that the financial addon was marked as beta for months with an absent developer. That severely tempers sales.


Yugensoft said:
I don't live in a country where a few dollars an hour is what developers are paid
Click to expand...

Many admins are struggling to find good developers. I get requests for referrals very frequently. While some do try to nickle and dime developers and there are also developers from low wage countries that do work for $10 an hour. But there are also plenty of developers charging between $30 and €60 an hour for custom development. Some even go as high as €120.

@Yugensoft i missed this but if you're not going to open source the addons then what are you going to do with them?