Implemented New comments search - evidence of how important this is

We're four months in to our conversion from my customised vBulletin+PhotoPost site at ZooChat to XF+XFMG and so we have now had enough time to find some of the limitations of XFMG.

The number one request/complaint by a very big margin is the lack of a "new comments" search in XFMG.

Let me illustrate the issue graphically:

Previously I had photos showing up as threads in vBulletin and there was a separate "New comments" search which was basically a modified "New posts" search and showed just new photo threads in a linear manner (like new threads) with a small thumbnail to the left. It worked really well and was very heavily used by members of my site. 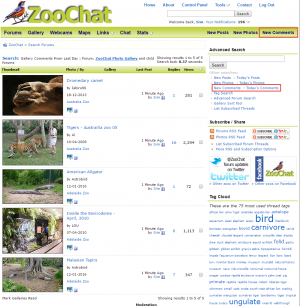 As you can see from the chart at the top, we were getting around 3,500 comments per month on the photos before the migration (some months we have more photo comments than forum posts!) while now post-migration it's more like 500-600 per month.

It is quite common to see photos with dozens of posts on them - people like to talk about the photos.

This has become a major usability issue for us and we have received a huge number of complaints about this missing functionality.

FWIW, there are a lot of things people do like about the new software - but I think the impact this one missing feature is having is obvious and significant.

For your consideration please
Upvote 2
This suggestion has been implemented. Votes are no longer accepted.

What you are asking for is this:
https://xenforo.com/community/threads/extend-the-discussion-function-to-a-comment-handler.89395/
This is basically the same suggestion.

Yes, I think the way you've described it is far too technical for most people to understand (but only because it is a very technical thing!).


But what you've described in that thread is exactly what I used to have (customised vBulletin+PhotoPost) - and I would love to have that functionality on XenForo!

Despite what I'm requesting in this thread, I'm actually not a fan of "comments", I would much rather there be a special class of forum thread which can be viewed and managed in exactly the same way as other forum threads can be - but can also be segregated so you can have searches/new posts specific to that type of content.

I would much rather have a real thread associated with content (kind of like how it's done in the Resources addon - but less clunky).

Ideally I want the additional functionality that a photo gallery offers for uploading and managing photos to be available to individual threads - let people view them as either a gallery of photos (for browsing), or as a list of threads (for searching / new replies etc).

But in the meantime, just having a "new comments" search would be a good first step.

Staff member
As I'm sure you've noticed, we now have a dedicated "New media comments" section, so hopefully this will help.

The comments made elsewhere about how these are displayed are certainly still valid, and changes are still planned there.

As designed Media comments page not showing all comments