How to temporarily remove a thread for editing

Ok so a member has started a thread that is long, controversial and full of capitals in bold. It also conflicts with other resources on the forum. The member is keen but I need to edit the thread a lot and message them and explain why. I can only see an option to delete it. I tried unapproving it as I thought that would make it invisible while I'm going through it - but it is still showing up to be opened and read. Whether logged in or not logged in.

Is there a way to temporarily remove it for editing?
Sort by date Sort by votes

Create a forum with permissions so only admin can view. Make it make it a private forum which is the easiest foolproof way to allow just one usergroup to view

We call it the "storage bin" and is a good place to put threads you want to stop being public, but easier to archive and find than deleting them.
Upvote 0 Downvote
A

Thank you. How do I that please (I remember I tried that once before on my other forum and couldn't get it to work!) At the moment is sitting in the approval queue with the options to "do nothing" (what does that do? Leave it?), Approve or Delete, Well I don't want to do the last two right now. If I select "do nothing" and save - will that still leave it there?
Upvote 0 Downvote 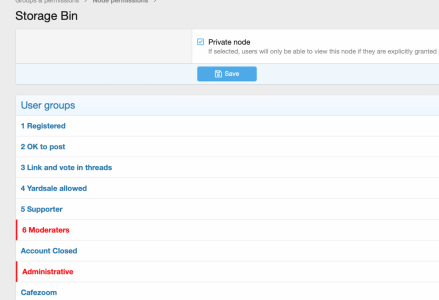 then go to the usergroup and give permissions to view etc...
Last edited: Nov 20, 2022
Upvote 0 Downvote
A

Thank you. I think I worked it out - but not sure if I did it right before reading your post. I created the forum node and ticked private. Under that all user groups showed and then a box for adding a user permissions so I put myself in there and set all the permissions for myself. Is that right too? It seems to work in that if logged in as a registered member the node doesn't show, but if logged in as myself it does show.
Upvote 0 Downvote

Alvin63 said:
I tried unapproving it as I thought that would make it invisible while I'm going through it - but it is still showing up to be opened and read. Whether logged in or not logged in.
Click to expand...

Unapproving should do it.
Upvote 0 Downvote
A

Thanks beerForo. I tried unapproving first but it still showed up in the forum lists whether logged in or not! When it was in the approval queue there was only the option to "do nothing" "approve" or "delete" I think. Do nothing - seemed a bit pointless having it in an approval queue unless it stopped it showing on the forum.
Upvote 0 Downvote

Was I supposed to select one of those options and save for the thread to disappear from the forum? I've now set up the private node and moved it there (I'm not sure if I did it correctly! But it's not showing up to registered members). I just set permissions for myself.
Upvote 0 Downvote

Alvin63 said:
I just set permissions for myself.
Click to expand...

That’s all you need do. Or for a trusted admin/mod usergroup who you may want to see it.

Always worth checking analyse node permissions for regular members in case you want to double check.
Upvote 0 Downvote
A

That's a good idea checking member permissions. I have a couple of registered accounts that aren't used so I logged in with one of those to check and it didn't show up, but checking individual permissions is a good idea.
Upvote 0 Downvote
A

So my first tricky situation on this new forum. This member is very very keen and clear wants to write articles and all sorts. So I am having to be very diplomatic because if it's an article it needs to have some authoritative links or be clearly marked as an opinion piece. If it's a forum thread it needs to be clear it's their own opinion (as mentions medical conditions etc). I have a lot of reading to do now I've pulled it to work out what to suggest to the member to change without sounding like a dictator or causing offence. But that's the way it is. There's a disclaimer at the bottom of the forum and if it doesn't fit within forum rules and the disclaimer it needs changing. The member had also messaged other members asking for contributions to this article and being a laid back kind of lot they were happy to do so - so the effect of this article gives the impression it's forum policy and approved by all! The members who contributed info haven't seen the full article yet and I don't think they would like their info used if they saw the finished article!

However this member just has an unfortunate tone and the keenness is coming across a bit over the top so maybe I can encourage them to change it tactfully.
Upvote 0 Downvote

You are overthinking it.
Upvote 0 Downvote
A

Lol. In what way? You mean just edit it and tell them why?
Upvote 0 Downvote

Edit their post? No. That's the overthinking part.
Upvote 0 Downvote

You are trying to control "user" content as if it was written by yourself.
Upvote 0 Downvote

If you want that type of moderation/post approval start a blog with multiple authors and be the editor.
Upvote 0 Downvote
A

That is where it's a dilemma as I don't want that really - this is just a very long piece that could influence others incorrectly and it needs to be clear it's the writer's opinion. It's written as if it's forum policy.

Also I am keen to ensure members aren't upset unnecessarily. It's something I disliked on other forums where one member would put these very controversial things and either scare or upset other members and moderators didn't edit it or remove it.
Upvote 0 Downvote

Alvin63 said:
So I am having to be very diplomatic because if it's an article it needs to have some authoritative links o
Click to expand...

Really? So one MUST refer back to "authoritative" sources? So, if I wanted to write an article on how to repair/modify a telescope mount using processes I implemented/figured I have to dig around and find a source of someone that may have also done such, realizing that I never depended on an outside source for my actions/processes?
If one asks for outside input, then one simply attributes in the article (either in a footnote or when using the actual input itself) the provider of that data in the format of a quote or footnote reference.

Just because YOU may not like the way it's written does not mean that it is written wrong.

Does that user have a normal title? Are they shown as staff? I seriously doubt that a normal user, looking at a post from another normal user would interpret anything as a "forum policy".

In fact, you can EASILY create some prefixes for that node that ONLY the moderators/admins have access to and have one set aside as "Posters Opinion", "Opinion" or similar and then assign that prefix to that post. If said user tries to change it, or does change it several times, then that is a user moderation issue that is addressed in the appropriate manner.
Upvote 0 Downvote

If you want to be "authoritative" and correct a post, quote it and make your own post.
Upvote 0 Downvote
You must log in or register to reply here.

Moving a post in an unapproved thread approves the thread automatically

XF 2.2 How to remove all Threads redirect

XF 2.2 How to get out of "tab" back to text after copy/paste