Fixed How to remove decimals in currency format

I want to show price without decimals, and the moneyformat has been deprecated in PHP7.4. 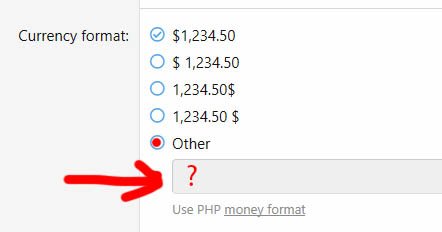 Staff member
This is actually a bug because we don't actually support money_format formatting. You can only control the position of the {symbol} and the {value} and they are the only two tokens we support (though admittedly there aren't really many other permutations left).

We'd probably be looking to clarify what format "Other" expects.

To answer your question, the currency format defined in the language isn't actually what should control the decimals or precision. In fact the rules of each specific currency are what control that.

Many currencies do display currencies to two decimal places but only a handful of currencies worldwide don't actually have that concept.

For example if you wanted to display a value in "Japanese yen" then it would look like this ¥1000 because that currency has no real concept of fractional units.

So, all that being said, there's currently no support for doing what you want, but we will clarify the meaning of this "Other" field going forward.
K

Ok, thanks for making this clear, and I think I know how to solve my problem based on what you just told me

Staff member
I mean if it was significant enough for you to want to modify it either with a direct code edit or an add-on then you would extend/edit the XF\Data\Currency class and extend/modify the getCurrencyData method.

This was exactly what I was looking for, and it works perfectly

Staff member
Thank you for reporting this issue, it has now been resolved. We are aiming to include any changes that have been made in a future XF release (2.1.10).