Fixed Ellipsis is hardcoded (and not included in a phrase)

It's a minor thing but nevertheless wanted to report it.

The three dots (ellipsis) are hardcoded and can't be translated. In my language it makes no sense to have it. 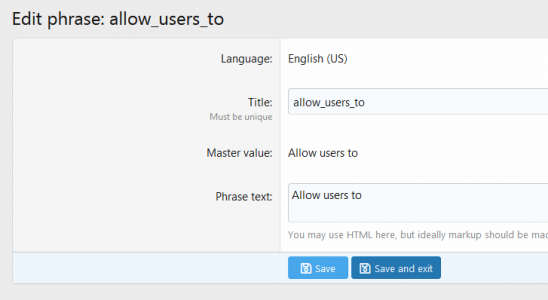 Staff member
It's not supposed to be translatable in the phrase itself. We rarely (if ever) include the ellipsis in the phrase text itself (since XF 2.0).

The ellipsis is inserted by us where it makes sense to when we call the phrase itself:


Code:
We can do this with other tokens too, including colons and parentheses.

So I'm reluctant to consider this to be a bug at this stage but if you can explain specifically what this translates to in your language and why the ellipsis is inappropriate here then perhaps we can reconsider but it's not a complaint we've heard thus far.

Staff member
You can of course change (or remove) the ellipsis character in the language settings, but it would change every instance of ... to whatever you replace it with.

Firstly, besides the translation problem itself, it is not on a par with the settings above. The other two in the privacy page have a colon, this one has an ellipsis. Aesthetically it looks strange

Secondly, it makes sense in this case for the English language, but only because you have constructed the sentences like that. You stopped after the "to" and then each setting starts with a verb. So in your case it makes sense as you can basically read it as a whole sentence. All of the following options.

Now you can say: "well then construct sentences in your language, too!"
The problem is, my native language's word order is S O V (English is S V O), which means the verb is always on the end of the sentence. That means if I construct a sentence, you can't understand the meaning of a sentence until it is finished. What does this mean? In English "allow users to" gives already a useful meaning about the following options. The reader knows without reading further that the following options will be about allowing users something. In my native language this is not possible. He has to read to the end to understand the option.

In any case what I want to do is this "Privacy options, Email options, Visitors related options". But doing that looks awful, as the first two have a colon and the last one the ellipsis. So I can't do that either.
So I have to build a whole sentence as a replacement for "allows users to..." and thats not a good solution.

I hope I could explain it.

Thirdly, the colon is universal, it can be used anywhere, it never breaks something. The ellipsis does in this case because it is the middle of the sentence and not every language is designed the English way.


Brogan said:
You can of course change (or remove) the ellipsis character in the language settings, but it would change every instance of ... to whatever you replace it with.
Click to expand...

Nah, without knowing and seeing what else would be affected, I can't do that. In other instances it makes sense. But thanks for the tip.

Staff member
I'll go through this in more detail at a more reasonable time but for your purposes right now you probably just want to modify the account_privacy template and change:


Code:
That will remove the ellispsis.

Thanks, done and it worked. As I said, it is just a minor thing, sorry for taking your time.

Chris D said:
I'll go through this in more detail at a more reasonable time
Click to expand...

You don't have to, you did here:

Not planned - (...) is hardcoded, please add to the actual phrase

Example: Post thread... I like Post Thread better If I edit the phrase the (...) are not there. I have to edit each template they appear in. Add media... same, and Update your status... I would like to change this to What's on your mind? So it looks really funny to have a question mark and then...

Staff member
Thank you for reporting this issue, it has now been resolved. We are aiming to include any changes that have been made in a future XF release (2.2.3).

Fixed Can not type orther language in translate Phrase