Is it possible to get a database preview of how posts are stored in xf? Planning to convert a large phpbb2 board. In phpbb2 posts are essentially stored as bbcode in the database. Do I need to buy a license first to get a preview of the xf database as well as the format that posts are stored? I realize there may be a phpbb3 > xf converter but I don't plan to upgrade to phpbb3 (for several reasons) and would be writing a converter to re-format the phpbb2 tables and data into whatever format xf wants. I just want to make sure I'm not biting off more than I can chew before buying a xf license.
Sort by date Sort by votes

Staff member
You'd need to purchase a license to see that level of detail, but XenForo stores posts in their BB code form.
Upvote 0 Downvote

Excellent, thanks for the info. That should make the conversion much easier.
Upvote 0 Downvote

Staff member
I'm not sure why you don't want to upgrade to phpBB3 but you wouldn't have to get it to a working state - as long as the database was upgraded and the files were in the correct location, you could still then use the XF phpBB3 importer.
Upvote 0 Downvote

There are several reasons. First the phpbb2>phpbb3 conversion is buggy. I wrote an ikonboard>phpbb2 converter 10+ years ago and recently was helping someone convert their large ikonboard forum to phpbb3. There was no ikonboard>phpbb3 converter so they went ikonboard>phpbb2>phpbb3. The ikonboard>phpbb2 conversion was flawless (of course, I write good stuff ha). But phpbb2>phpbb3 was a headache with a lot of things not converting properly, particularly html in posts. The other reason I don't want to convert to phpbb3 is I've written a lot of custom mods for my phpbb2 board. The phpbb2>phpbb3 conversion would mess a lot of it up due to the way phpbb3 messes up the conversion and stores posts as convertered html instead of bbcode (it's really bloated and ugly, don't know what they were thinking). And I don't really trust the phpbb3>XF converter to do things right either. We are approaching 1 million posts and it's going to require hand holding to convert things properly. I'd rather manage that once than twice.
Upvote 0 Downvote

tomdav said:
And I don't really trust the phpbb3>XF converter to do things right either.
Click to expand...

As long as the data is sound, there should be no major issues.

We've had many customers use the phpBB3 importer successfully.
Upvote 0 Downvote

I suppose I could give phpbb2>phpbb3>XF a try before rolling my own to see how bad it looks. Another reason to roll my own would be to minimize issues with broken links. For example, during the conversion process I would dump a cross reference of old vs. new post IDs and topic IDs so that search engine and other links to the phpbb2 posts and topics would be redirected properly . I'm assuming the phpbb3>XF conversion isn't that sophisticated.
Upvote 0 Downvote

Staff member
The importer has an option to archive the log to the database, which can then be used with a redirection script: https://xenforo.com/community/resources/categories/redirection-scripts.2/

If you choose to preserve IDs, you could probably get away with basic rewrite rules.
Upvote 0 Downvote

Here's what the xf_post table is 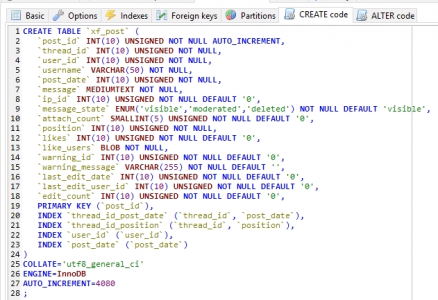 If you are looking to import with DB inserts I would strongly advise against it. I have done imports from custom applications and obscure scripts for forums with millions of posts and millions of users and trust me it is much better to spend the time and write an importer in php which uses XenForo's DataWriters in importMode rather than directly in sql.

And All the Best!
Upvote 0 Downvote

tomdav said:
And I don't really trust the phpbb3>XF converter to do things right either.
Click to expand...

I've never tried the PHPBB2 > PHPBB3 updater so can't comment on that side, but don't let that hesitate you. They're built by different teams and on the XF side of things you've got some great support should things go wrong.

Just ensure you create backups at every stage (and preferably run a test migration first) and you should be fine.
Upvote 0 Downvote

RM 2.2 Storing files in S3 with their original name and extension