Dark Frost - Something made on the fly

Dark Frost is a simple style which I made. Very basic.


Just a few colour changes and the default font is Trebuchet MS
for easy viewing and keeping with web font standards.

Read more about this resource... 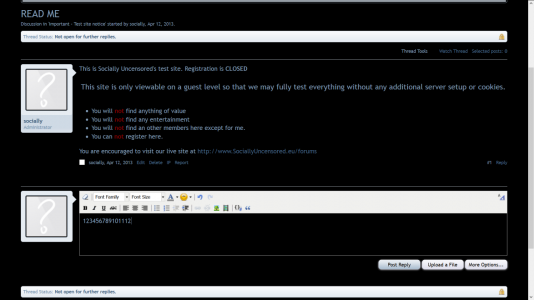 hm.. I don't usually give bad reviews. This I really not like. I would probably give it only 1 star. Too much black-white contrast hurts the eyes and the blue seems out of place. It seems unfinished. Your Light Frost style is much better because it's based on a decent light style.

Luxus said:
hm.. I don't usually give bad reviews. This I really not like. I would probably give it only 1 star. Too much black-white contrast hurts the eyes and the blue seems out of place. It's seems unfinished. Your Light Frost style is much better because it's based on a decent light style.
Click to expand...

Ironic you say that... The dark style came first and the light style come from this.

Personally, I'm not much of a fan of either one. I made them both only to show someone else how easy it was to color XenForo.

Notice: This update was made for XenForo 1.2+

If you're still using or needing an older version (1.1.5 or older), you can obtain a copy here
http://xenforo.com/community/resources/dark-frost.1812/history

The more I play with this style, the more I come to hate it myself.

XenForo is just not easy to make a dark style (other than just black, white, gray), because far to many style properties change with each other. I guess if I wanted to go deeper and play with every setting independently or add some extra.css code, I could have made this better.

But to quote @DRE favourite quote .... Ain't nobody got time for that ! (Or at least I don't as we get close toward October and I'll be busy until March). And if I did have time, I would want to take a different approach.


So what I'm doing is releasing a "silent" update. Because I don't want to exactly leave anyone technically hanging and because I don't want to make an official update (its not worth it) and I also don't believe in deleting resources..... YES, I know this isn't McDonald s and I can't always have it my way, but I try.

So for the individuals who actually follow this thread here is my final update. (oh noes !) 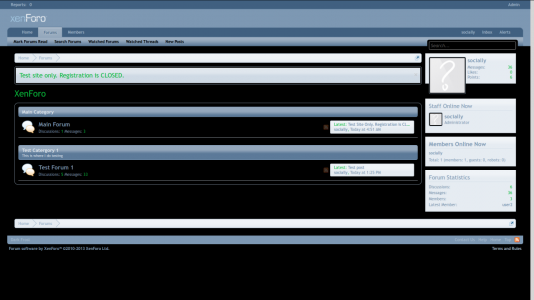 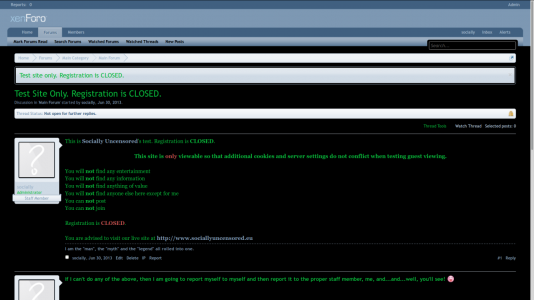 Attached is both the original and final for XenForo 1.2.1. All is not lost though. Light Frost was birthed from Dark Frost and it will be continued.

This resource has been removed and is no longer available for download.

Adam Howard said:
This resource has been removed and is no longer available for download.
Click to expand...

Reason for deleting: Because I can't stand this style. I mean I hate it so much, that after releasing it I thought to myself, WTF was I smoking. And because I don't want to support it or develop it any further. It just needs to go bye-bye.
You must log in or register to reply here.