Well, here in two days with the America...it marks the 15th anniversary of the World Trade Center attacks. So I thought I would make this thread and see where you were when all of this was happening?

I was in 5th grade when all this happening and my teacher told us about it, had to get a TV in the room to watch the news for about an hour.


So where were you at, at the time of the attacks?

Those were pre-vBulletin 3 days which I don't like to think about.
I think I was using Snitz at the time.
My mind has blocked those days out.
Thankfully.

I was only 3 at the time, I think my Mum heard about it while she was purchasing something in a charity shop...

Probably in school but I don't remember ever hearing of it happening at the time it was just one of those things that you picked up over time.

I was probably too busy rolling in mud or kicking a football to care...

Watching late night news in Syd, Australia waiting for sports show to start...and then the breaking news started, and then watched as the second plane hit. Next day was chaos at work as the US Embassy was in the same building and everyone told to go home if feeling unsafe.

At the time I was enlisted in the United States Navy stationed at Naval Air Station Sigonella in Sigonella Sicily. I was just getting off work at the time. I went to the Navy Exchange and saw it on tv when they were showing footage of the first plane hit. Everyone around me was all like how can the pilot fly into the building. Did he pass out, etc, etc. I had a bad feeling and I said no that was a terrorist that did that. They were all like no no that can't be. A few minutes later we all watched the second plane hit and I looked at them and said coincidence? I think not.....then they started to believe me.

After that I left the Exchange and went to the base theatre to see a buddy of mine that worked in the weapons department that worked part time at the base movie theatre. I was telling him about it. Not even 3 minutes into telling him someone came running into the building saying we just went to ThreatCon Charlie and they were getting all non military personnel off the base. Then a few minutes after that we went to ThreatCon Delta which is complete base lockdown. It was a very sad day in American history.

I was at work, I happened to be out late the night before in NYC and at one point I was looking up at the towers themselves sometime around midnight to 1AM on September 11th thinking to myself I should come into NYC more often. (I lived in Queens, worked in Westchester, and generally avoided Manhattan proper.) I got home like 3AM, found it hard to sleep, was still young enough (22?) I didn't need to sleep and decided to go into work extra early.

My mother called me at work to tell me a plane hit the tower. I had to hang up with her to find a television in the office. By the time I got to the TV I saw what turned out to be the 2nd plane hitting live. I was confused wondering how did they have a camera to catch the first plane hit and why was there already smoke? Then we all realized what was happening. One of the guys I worked with had his wife who worked in the towers so he went to call her. (She lived, thankfully.)

I had to cross a bridge to get home so I never went home that night, the company had a few empty apartments nearby and me and another worker got the keys to one for the night.

Those who weren't alive or weren't old enough may never understand how much the world changed that day. Even if there was another attack of the same size, it probably wouldn't be the same, because now we almost expect one.

A good friend lost their father that day in the towers. He was the only one from his company to die, they'll never know why or exactly where he was, I assume he may have stayed behind to help others out because he was that kind of person.

It both pains and enrages me when people, especially those who were in diapers when it happened, spout bullcrap about it being an inside job, or planes didn't hit the towers, or they were wired with explosives, or the Jews didn't go to work that day (My friend's father who died happened to be Jewish.) I don't care than 200 engineers signed a report saying the official story isn't true, there are millions of engineers in this country who did not sign challenging the report. If you lived it you know what happened. We let our guard down and they got us.

BirdOPrey5 said:
Those who weren't alive or weren't old enough may never understand how much the world changed that day..
Click to expand...

It truly did. I'm old enough now to have seen the pendulum swing fully in both directions.

I remember the excitement and optimism of the Berlin wall coming down, the end of the Cold War and the fleeting feeling of world solidarity.

And then 4 planes were hijacked. Fast forward 15 years and I don't even recognize the world I live in today as the same world I lived in pre-September 11, 2001

@Ernest L. Defoe, thank you for your service sir.

Well I love my country and was the least I could do for it. The Navy was actually the second branch I've been in. I was also in the United States Marine Corps.

We went to Delta so quickly cause there was intel that the base I was stationed at was a target as well cause of the strategic location and the fact that everything heading over the Middle East came through our base. It was a pretty scary time especially since before that we had no real way to protect ourselves. Once we went to Delta missile launchers and fighter squadrons came to the base to protect the base.

Axis said:
I was in 5th grade when all this happening
Click to expand...

You all make me feel old

I just walked into the office, at the met life building in NYC. Everyone was standing around the TV in the lobby as the news discussed the first plane hitting WTC. At first I thought it was an accident -- a plane once hit the empire state building and there are a few odd helicopter crash stories too, but then the second plane hit and I knew it was not accident.

I walked out the door and caught the last subway out of Manhattan.

At one point I looked out the subway window and I saw the WTC -- one of the towers had by that point partially collapsed. The top was missing off it. By the time I got home, it fully collapsed.

That night, and the next few nights, my friends and I thought this is it. This is war.

The world did change that day.

I was at my girlfriend home... After a while (it was around 16:00 in Italy IIRC) I turned on the tv and I call her immediately, in some minutes we saw the second plane hit live and then the towers collapse. We were petrified.

10 years later we went in US for our honeymoon (October 2011) and visited the park opened for the 10th anniversary. The "waterfall holes" are impressive... The names around theme even more!
Last edited: Sep 11, 2016

@Kintaro are you from Italy?

Yes, but in my honeymoon round trip I felt in love with New England, NYC included.

I wasn't far from you then when 9-11 happened considering I was in Sicily. 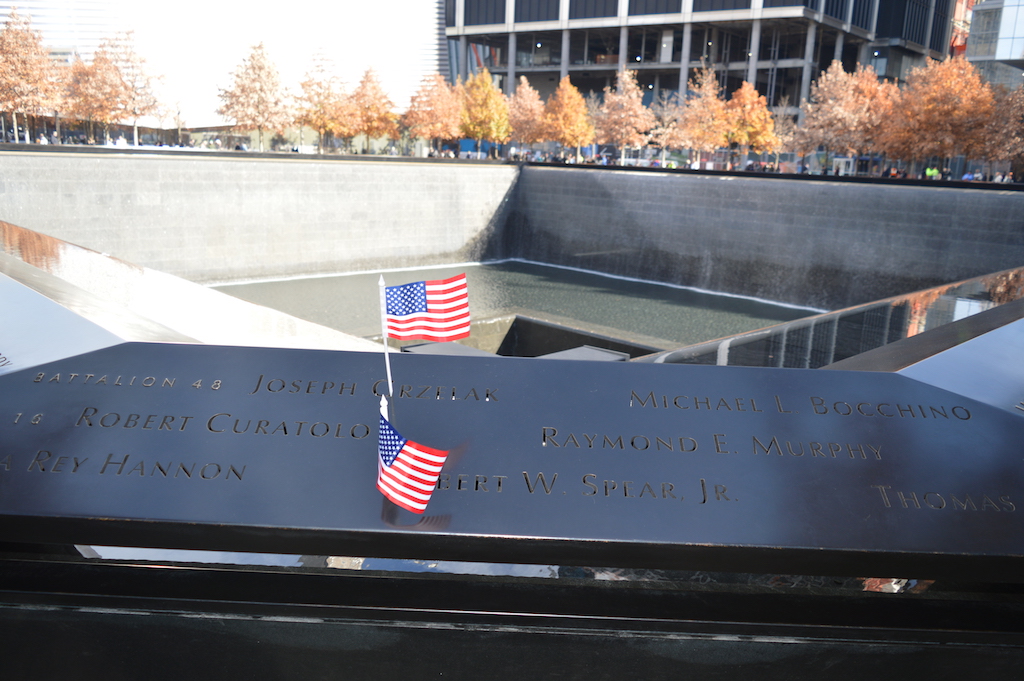 One of the photos i had taken when i went New York last November. It's a real odd feeling you get when there because it all looks so nice now, but you know something very bad had taken place there also.

Sep 17, 2020
Alfuzzy
A
F
Elasticsearch stopping on its own every morning