XenForo 1.0.0 Release Candidate 1 moves us one step closer to a stable release. This release includes a number of bug fixes, as well as a few small feature changes. The focus is now solely on working towards a stable release. We'd like to thank all our customers and everyone else who has helped us to reach this milestone.

Installation and upgrade steps are listed below, though they remain unchanged from previous versions.

This is Unsupported Software

While we have moved on from the beta distinction, please remember that this release is not officially supported. Support is limited at this time to questions here on the community forums.

If you choose to run unsupported software, it is your responsibility to ensure that you make a backup of your data.

What is a Release Candidate?

After a number of beta releases, the functionality of the product should be complete and the rate of bugs being reported (should) slow to a trickle, allowing the development team to work through the backlog and reduce the number of bugs to a handful. We have now reached this point in the development of XenForo 1.0.0, so the time is right to produce a release candidate.

A number of notable changes are listed below the installation and upgrade instructions, including Feeder Previews, Style Previews, Tweet Buttons, Discouraged IPs and more.
Click to expand...

If you are installing XenForo for the first time, please ensure that you do not download the upgrade package from the customer area.

To install XenForo, you will need to extract the zip and upload all the files from the contained upload directory onto your web server. You may upload into your web root, or any folder within the web root. This shall be referred to as your XenForo Directory.

Having uploaded the necessary files, you should direct your web browser to the URL that corresponds to your XenForo Directory and add '/install' to the address (eg: http://www.example.com/xenforo/install). This will trigger the installation process, which will guide you through the necessary steps to get a working XenForo installation running on your server.

Please note that the installation routine will direct you to ensure that the data and internal_data directories within your XenForo Directory are writeable by the webserver (ie: chmod 0777).

If you are planning on upgrading, please ensure that you download the upgrade package from the customer area.

The style editor now has a field in which you can enter a description for your styles. This description will be displayed to users in the style chooser, along with a new icon area, which can be optionally populated with small thumbnail previews of your styles using CSS. Look out for a tutorial on how to produce these thumbnails and get them into your style chooser coming soon. 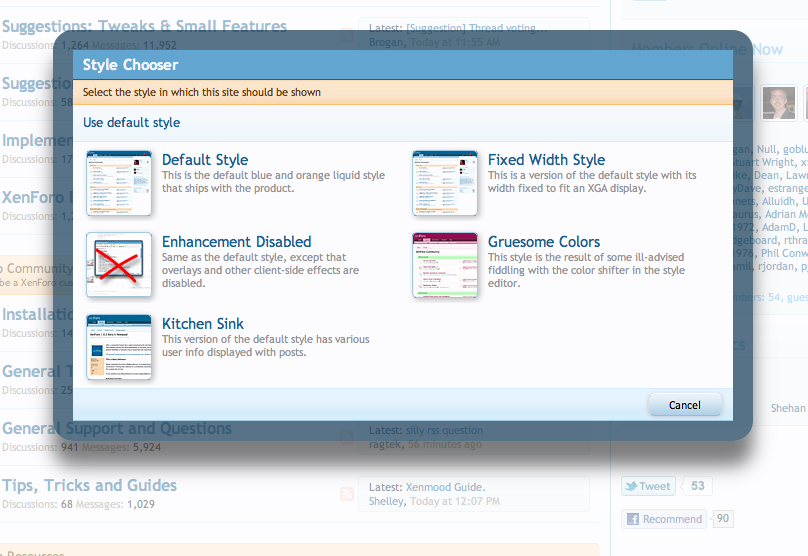 The tutorial has now been posted.

To assist in debugging feed problems, and to help you construct title and message templates that best fit the content, the XenForo Feeder now has a preview button, allowing you to preview your changes before you even hit the save button. All that is required is a feed URL, and the AJAX previewer will do the rest. 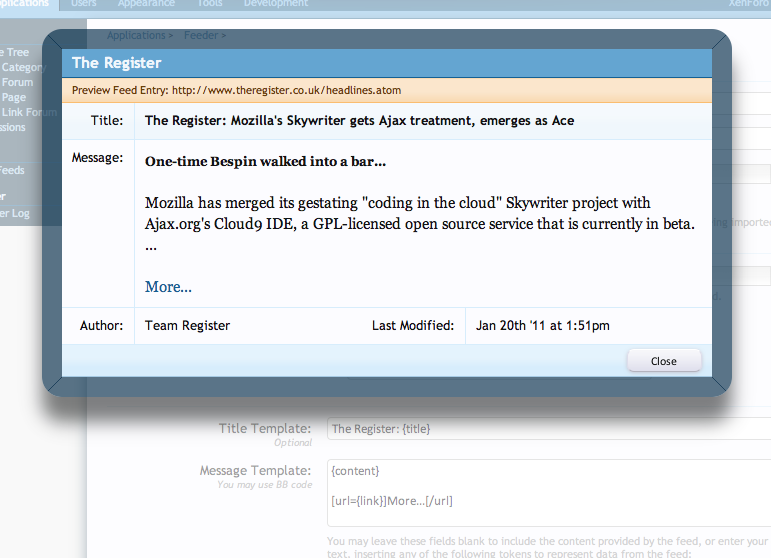 Fields are provided to allow you to specify a via and a related account, to encourage your visitors to follow those accounts themselves. 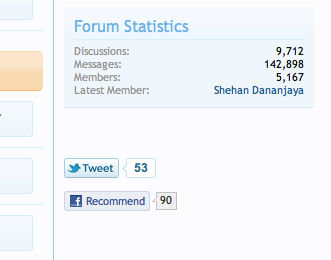 In addition to the existing user-specific discouragement, you can now discourage IP addresses instead of outright banning them. This can be used when bans don't work, and help cause problematic users to leave on their own accord.

As with XenForo's IP banning options, IP address ranges can be specified in addition to single addresses.

You may now choose whether the lightbox shows all images on the current page or only images from the message that you are currently reading.

The performance of the lightbox has also been improved, and a new progress indicator is used to alert visitors to images being loaded.

The overlay-based "inline" message editor now dynamically resizes itself like the other editors in XenForo.

The look of the editor contents will now resemble message text more closely, including link coloring. 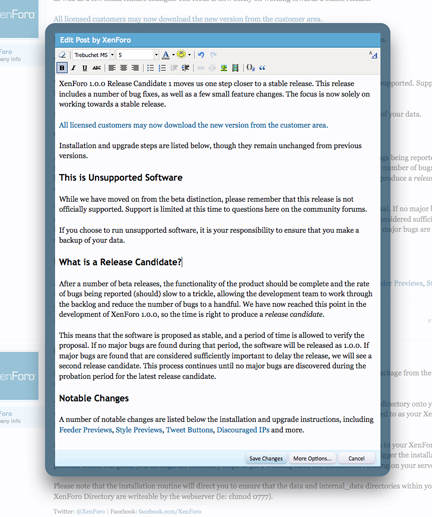