I have to Vent out my frustration so be warned, extreme ***** fit follows!

So I hired this developer (not from XenForo.com BTW) to perform some PHP Script work on my website. I simply wanted 2 Div boxes to fill automatically with Recent Posts and Latest News.

Basically, I make a post on the forum and that post automatically shows up in a little box on my homepage.

We agreed to a price of $150 and started out. The hire was confirmed on June 16th, 2013 and the job began on Monday, June 17th, 2013. He said it would take him just a few hours and that I could expect results later on that day. I said, no worries, my Deadline is June 22nd. That gave him 5 days for a job he said would take just a few hours.

Sure enough, my Deadline comes along and its clear no progress was made. I felt like because I gave him a 5 day deadline that he decided to put off my work until the very last minute. And now, it's too late and he's not finished. So, he asks for more time. Fine, I gave him an additional week. Now he has extended time til June 29th.

The next day on June 23rd he tells me he's having issues with the PHP and confesses that he doesn't know PHP and instead contracts that type of work out to some of his friends. He tries to reassure me saying he will have it all done for me by my new deadline.

Instead, he decides to go MIA via Skype and I haven't heard from him since then. It's now present time, today, July 6th 2013, and now I have to figure out what to do about this situation.

So, here's a message I sent him via ODesk. 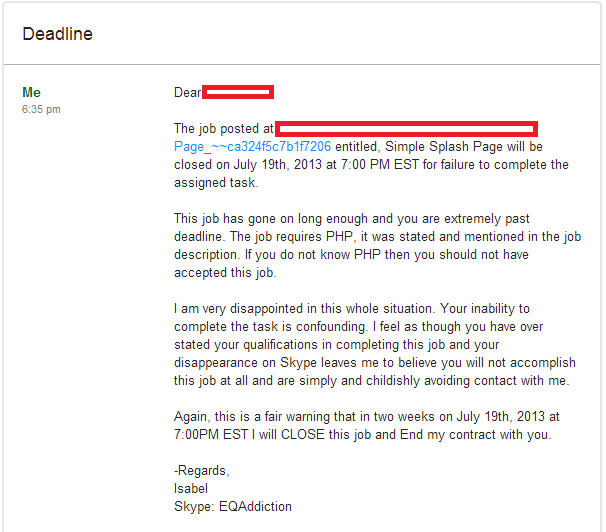 ​
Any of you have a poor development story to share that isn't related to XenForo or the developers here?

Don't be afraid to ask for help - people are generally good.

XF 2.1 Birthdays show up +6 hours ahead of time for CST users, even with timezone set to CST