Staff member
Something which may help when setting up permissions across multiple user groups.

This could apply to nodes and individual permissions. 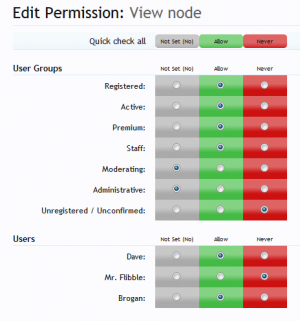 The image is broken for me.

Sly said:
The image is broken for me.
Click to expand...

This feature will be really useful to set up proper permission hierarchy, although I'm not sure how per-user permission will work on this page.

Staff member
I spoke with Mike about it some time ago and I think he had another idea about how it could be done.

I fixed the image issue - I was reusing an attachment from a customer forum.

This is a bit old, so I hope it's OK that I give my own interpretation on this...

(With this layout, it would likely be best to have separate matrices for user groups and users.)
Edit: Nearly forgot about how to delete groups! Random ideas:

Would there be any overflow-like issues with those sites that use more than the default user groups?

For example, KH-Vids, a site I frequent, has:
The ones in red are custom.

This would be sooooo cool to have this.