All right, but it would be better if you could set a limit for each group.
It would also be good if there was a right to the maximum number of user name changes
The second nice thing would be that the user would be set a non-standard title with the following phrase formerly 'name'.
And according to the crown for example after a certain time it would be possible to adjust through which this title is removed. e.g: 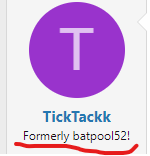 Or add a tab or something else
Upvote 7