Staff member
There is nothing built in which will do that automatically.
Upvote 0 Downvote

Rather than set the ban as permanent you can then set the ban for a period of time after which some points will drop off and the ban will be lifted.
Upvote 0 Downvote

webbouk said:
Take a look at this add-on...

Rather than set the ban as permanent you can then set the ban for a period of time after which some points will drop off and the ban will be lifted.
Click to expand...

I use that add already
How should I set it up to do what I want to do?
Upvote 0 Downvote

Set the points and time period for the warning then .... 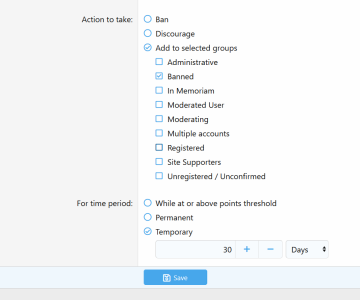 Or as you wish

You'll notice I also have a group named 'Moderated user' which is a copy of the 'Registered' group but requires all posts to be approved.
Placing a member in that group prevents their posts from being displayed until approved by a moderator.
Just make sure you don't set a banner for either group otherwise it will show in their profile.
Upvote 0 Downvote

webbouk said:
Create a Group called 'Banned' and set permissions to 'No' for what you want

Set the time period for the warning and ....

That’s not what I need

You can set the warning points to expire as you wish.

webbouk said:
You can set the warning points to expire as you wish.

Bear in mind though if you ban someone for a year they're hardly likely to want to come back and use your forum again
Click to expand...

The points.
Let me give you a specific example:

@interforo
Once you have "banned" someone, then surely that can't, by definition, accrue any further points, since they can't actually do anything.

webbouk's suggestion to restrict them with a secondary usergroup (rather than an outright ban) has a great deal of merit. But I'd suggest that the restricted UserGroup you create does NOT use the term "Banned" so as to distinguish these from true bans. Use another term to indicate restrictions (we use "Suspended" but anything similar would do).

I'd suggest that your scheme goes like this. It's not exactly what you say you want, but it comes fairly close, I think:


This would be the effect

12 months later; restriction lifted and all warnings have expired. Total 0. Rinse and repeat.
In the interim, if the same user manages to further misbehave (eg by registering a duplicate account) then you can simply fully ban and that's the end of them.

You can, if you care to, add to the deterrent effect here by having an incremental approach to the restriction terms. Like, say, a month "off" at 10 points. And 3 months at 15 points. etc.
Upvote 0 Downvote

Bear in mind also the level you set the points is a trigger, ie they have to cross that threshold for whatever action is required to take place, ie action to take place at 5 points, trigger needs to be set at 4. The action will then cease once the points drop to 3 .... if that doesn't confuse you
Upvote 0 Downvote

webbouk said:
The action will then cease once the points drop to 3 .... if that doesn't confuse you
Click to expand...

If I understand your "point" correctly - not necessarily.

...while at or above threshold
OR
...for a fixed term.

If it's a fixed term (as per my example above) then whatever happens to the points while the action is in place, has no effect on the action itself. A 1 year restriction lasts for 1 year regardless.

Expiry of points (for example) would affect the action only if the ......while at or above.... option were used.
Upvote 0 Downvote
You must log in or register to reply here.

XF 2.2 User upgrade not showing in ACP active or expired

XF 2.2 Banned Logo URL is not honoring the ACP settings

Troubles with users reporting SPAM when sending emails to all!