Auto-generated but custom PM (and/or alerts) for report handling

I'm willing to pay for this (depending on price) and would love for it to then be available to everyone through the resources.

When my site gets posts or PMs/conversations reported, depending on the type of report it is, we sometimes send out a PM/Conversation to the reportee to let them know we are handling it.

As far as I know, there is no mod for this

So I'd like to get one made. Ideally, it should be able to:

I'm thinking it would look layout-wise something like this: 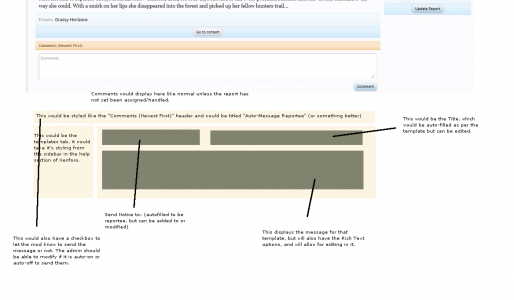 Along with that, I'd like a second similar system as part of it or separate, but using the alerts system instead - where it simply says, "Your report for {reported content thread/conversation title} has been assigned to {staff member handling}. It should also be able to send out another when the report has been resolved or rejected. This should also be accessed through the report handling area.
You must log in or register to reply here.

Fixed Send Reports Into Forum - Problem when that Forum is Deleted