We're sharing photos and videos and creating discussions around those content types more than ever.

Video in particular is a medium where it may take you anywhere from 30 seconds to 3 minutes to 30 minutes or even longer to consume it.

While watching the video it's common for us to want to browse the comments and see what others have to say about it, as it continues to play in the background.

XenMedia Gallery and XenForo Media Gallery still aren't well integrated into the 'New Posts' or any other new content discovery sections of the forum and therefore get much less traffic than threads. As a result, many users prefer to share videos and images in threads instead, as they're likely to garner a higher number of post reactions and comments. This will continue to happen long after tighter gallery integration and many forums don't have gallery's installed, so it's probably still worth implementing.

As a result, it would be cool to be able to specify if media (especially video) in the OP could float at you scroll down the thread.

This could perhaps be specified on a node basis.

This has become an increasingly common feature on news sites and also facebook groups. It's not always implemented well, but when it's done right it's very useful.

It means you can comment and interact with other users as you're watching the video, so you don't have to pause it, wait until it has finished playing, or open a new tab to comment without interrupting the video.

You see a Facebook Video post in your feed, with the video at the top and the first few comments. 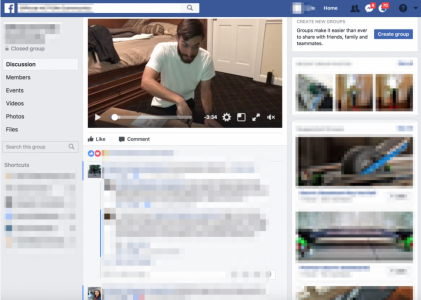 You click to play the video. Once playing you can expand the comments (so it's more like like a forum thread now) and continue scrolling. As you move below the original video location, they player shifts to the left of the screen so you can continue to scroll, read, rate and reply to comments as the video plays. 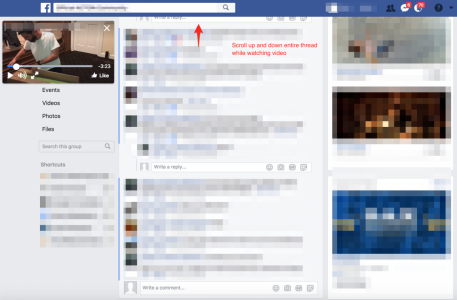 You may not need to shift it on a forum, but just sticky it to the top of the screen as you scroll, more similar to how many news sites do it.

Here's a news site example from Bloomberg, although they also shift it to the side
https://www.bloomberg.com/news/arti...-employee-behind-controversial-diversity-memo


If someone shares a video on a forum and writes an accompannying long post with it, then this would be a similar comparison. You could have the video from the top of the post follow you and play in the background as you read the OP's accompanying text.


The video would only follow you if it was playing when you started scrolling, and it can easily be closed if you no longer want it.


This concept of being also to browse and interact with the comments while keeping media on the screen is something I would also like to see applied to the media gallery. The lightbox on the official media gallery is no where near as user friendly or encouraging of engagement and activity as the one in Son's Gallery, and as a result it's one of the major reasons that I use Son's gallery instead. 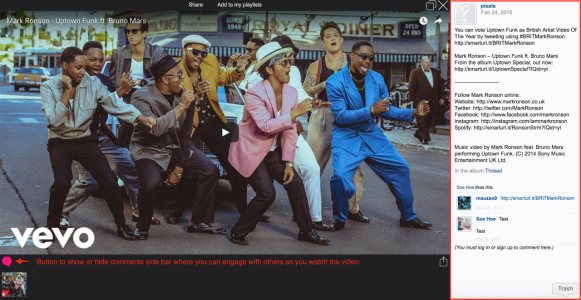 Last edited: Aug 8, 2017
Upvote 3
This suggestion has been closed. Votes are no longer accepted.

RobinHood said:
This concept of being also to browse and interact with the comments while keeping media on the screen is something I would also like to see applied to the media gallery. The lightbox on the official media gallery is no where near as user friendly or encouraging of engagement and activity as the one in Son's Gallery, and as a result it's one of the major reasons that I use Son's gallery instead.
Click to expand...

I think I already made a suggestion about that and got a "no thanks"... but I think I made it when XFMG was XMG (here: http://xenmediagallery.com/threads/xmg-layout-re-design.502/page-2#post-6210 LINK OFFLINE), maybe some years later ideas are changed.

I really like the way a media can be easily commented with that kind of view.

Yeah, it's a shame that wasn't part of the original XFMG lightbox to begin with, that part of the gallery has always felt incomplete to me as a result. I think it's quite important to have the ability to view the media and scroll through the comments in the same view. The lightbox in XenGallery is very good imo.

It's was heavily inspired by Facebook's lightbox format at the time and still works well.

This is now implemented on Reddit's built in video player when reading comments.

When the video plays, it's shrinks and follows you as you read. If you pause it, it scrolls out of the viewport as normal.

You can test it here

D
Looking for professional service to implement Wasabi service on my XenForo, specially for playing videos on Media Gallery.