OK... I use additional graphics for extended reactions. I, at first, had them at 128x128 pixels, as they resize as they should for selecting them when compared to the default ones... but I have noticed a placement issue on both my PixelExit style by @Russ and also on the default style.

As you can see, the telescope image is intruding over the top of the other default like image. I have even resized that telescope to 32x32. Do they need to be in 16x16 format?
Or is this more or less a bug in XF?
Sort by date Sort by votes

They have always overlapped 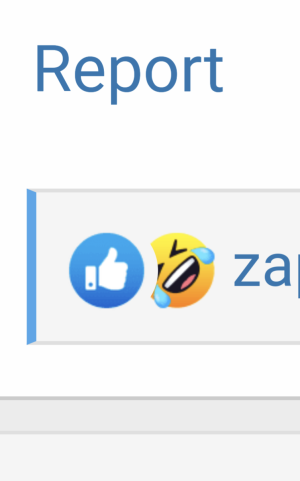 That's from this site
Upvote 0 Downvote

beerForo said:
That's from this site
Click to expand...

Then definitely a bug if they overlap.... they should not be.
I hadn't really noticed it here..

Maybe something that @Chris D and company should look at. It does look bad... I didn't even notice on my site until one of my new users told me about it.

As for "always"... nope
From another site.

Don't know what exact version they are on... but it's one of the newer ones.
Upvote -1 Downvote

Not a bug. Supposed to look like that.
Upvote 0 Downvote

No, that is DEFINITELY a display bug... as I showed (in the edited post) it isn't that way over on TAZ (where those images come from).. not sure what version they are on. It wasn't that way in my 2.1 series either before I upgraded. It's not that way in other scripts... so if it's "supposed to look that way" then someones idea of stylistically pleasing needs to go back to kindergarten. 🤪
Upvote -1 Downvote

As far back as I have used it, there's been the slight overlap as a space saver, which may not be evident with some of the icons. This is not a bug so you may want to post a suggestion.
Upvote 0 Downvote

Staff member
It's not a bug and as designed: https://xenforo.com/community/threads/building-with-xenforo-2-is-back.206322/
Upvote 1 Downvote

beerForo said:
As far back as I have used it, there's been the slight overlap as a space saver, which may not be evident with some of the icons. This is not a bug so you may want to post a suggestion.
Click to expand...

To me it is STILL a display bug... in nobodies mind is stacking reactions a good idea™.
It looks childish and cramped... Just because FaceCrack (ack-spit) does it does NOT make it a good idea.

If it IS a design choice by XF, then hopefully there is a simple template edit to bring it back to what is more commonly accepted among the forum community. To some of us, the "stacked" reactions are clutter.
Upvote 0 Downvote

Brogan said:
It's not a bug and as designed: https://xenforo.com/community/threads/building-with-xenforo-2-is-back.206322/
Click to expand...

Then back to kindergarten they designers need to go! 🧸
Just because FB does it doesn't mean XF needed to replicate it. In fact, if you notice, their default (on the web) reactions are a "tad" larger (and MUCH cleaner) than what they are on an XF site.... and if you notice.. they even give more spacing between the overlap of the icons.

Or the example I gave earlier

Tell me in WHAT universe that chopped off cramped block looks "clean" on the blue thumbs up? I guess if ALL your reactions were roundish and solids, it wouldn't be as bad as evidence of the first image of the smile wearing glasses.

The default (even on the XF site) display format is MUCH more cluttered than FB... Those images were cut from two different tabs.. one on my site, one on FB web page. And then when you combine it with a dark background, and images that have quite a bit of transparency around them, it looks even worse. With separation between them, it would not be noticeable.

It looks "ok" on an iPhone 13 Pro Max... but even on my desktop with a larger screen they look "cramped".
Not a fan of it... but it's something we'll have to live with I guess while script developers continue to emulate FB and such.
Last edited: Aug 27, 2022
Upvote -1 Downvote
You must log in or register to reply here.