I have been working on something and I am wondering for any twitter users out there if the output from this is something that would look ok in their forums in posts. 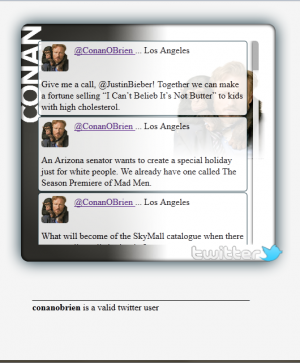 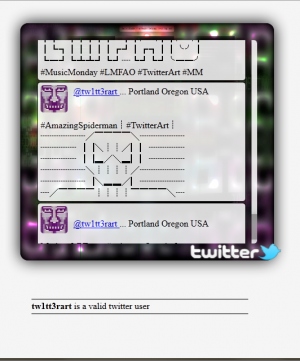 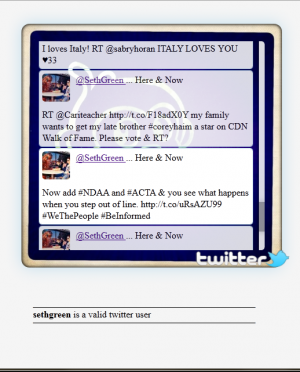 To test it out...(this will be done automatically by bbcode mediasite definition by matching a specific twitter url that has been submitted as a post.)

I am definitely interested in this. Has a lot of potential, especially if being posted in a thread.

stewart1champ said:
I am definitely interested in this. Has a lot of potential, especially if being posted in a thread.
Click to expand...

Yeah for sure..the whole purpose in me trying to make this was a request for twitter user timeline in a media bbcode and once I tried it I found that I don't like the default look of the embed so I just recreated it manually.

I only have one (maybe two) small things to iron out and this will be done..it also serves as the base for one more possible use for this thing (for lack of better word) that I can think of.


If anyone does try it and sees something ugly, stupid, or not working please say what it is and the browser you are using.

Fixed an open tag which for some reason didn't break anything :-/

EQnoble, any update on this?

stewart1champ said:
EQnoble, any update on this?
Click to expand...

I have been waiting on people to try it out and report errors or any ugliness that appears on the standalone page but no one has really provided me any feedback on whether it displays correct for them on their browser/os configuration.

The only thing I have done since last word is add the reply, retweet, and favorite buttons. Once I have enough feedback of people telling me there is no problems with the page displaying on the various different browsers. I will move on to finalizing it as a bbcode which I can do now...but I don't want to release the code yet until I know it is not flawed in any major way, I have made that mistake before.

For now (for testing purposes) I left it on a standalone so people can try out many different twitter accounts without having to signup anywhere for speed sake the faster I get a couple test results back from people the faster I will move on to the next step so hopefully people give me some feedback soon in one of the threads I have posted this in.


another variant of the same thing, just playing around with the styling until I get feedback. 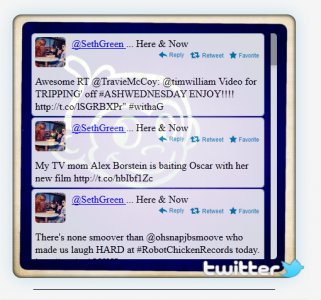 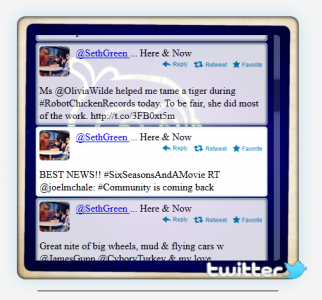 Not sure the status of this. I'd be interested in seeing or attempting a variation of this, to be placed on the Members Profile Page. Have the option to enter whatever Twitter Account they want to follow (into a custom userfield), and have it show up in the sidebar like that. Smaller version of course... something like 192px wide.

It was already planned for it to be a tab in the members page and it probably would have used a user field(that was spooky that you thought of it), but at this time things may change for me in my personal life in a way that makes me unable to be here which sucks but it is what it is.

I will respond at some point either way right here...I am not going to make a stink about it...I may have to go, it is as simple as that, however if I do...I release all the random crap I did like this twitter thing and my flowplayer stuff and all that so all I can say is if you wait about a week or two you wont loose either way

Sorry that you have to go EQnoble, but if plans change then it would be cool to add it to the Member's profile, that's for sure

either way I am going to release it before I shut off my internet if i do end up leaving...if that is the case I am sure someone else can pick up what I left off at with all my snippets of code like this thing....like I said dont worry about me....it is like I was never here
You must log in or register to reply here.
Share:
Facebook Twitter Reddit Pinterest Tumblr WhatsApp Email Link
Top