Menu
Log in
Register
Install the app
You are using an out of date browser. It may not display this or other websites correctly.
You should upgrade or use an alternative browser.
Resource icon

Put this code in the place where you want to put your translate option. I have put it in Logo Header region so that it is easily accessible to all users.

Read more about this resource...

I love this idea but the last time (in vB) I added something like this the translations were kinda laughable. Has Google translate improved enough to have good translations or is it still merely "serviceable"?

Yes, for me it's working fine. I've checked it for our local languages.

Apparently this does things like Spanish very well. Finnish? Not so much. The quote from one of my Finnish users is: "Okay, tried it... and stopped it before the horrible translations would make my brain hemorrhage."

So it works in that it translates, but it's translating into "Googlese" and tends to butcher the more exotic languages. I'll be leaving it on and this works just as advertised, but don't expect perfect translations.

Oh, and I added this to my sidebar by making it a widget. I created a template called "translate" and then in the AdminCP -> Appearance -> Add Widget. I've attached a screenshot of how I set the widget. Works gangbusters. 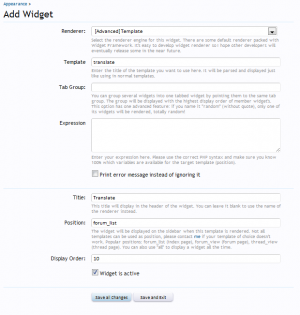 Not exactly. You need to read the full Resource Description.

There is no installer for this, you need to make the template edits yourself.

Staff member
I've knocked this up.

This is Gopala's code in an installable add-on.

Gopala, feel free to update this resource with this add-on.

Thanks for this, i'll update my post with this.

Put this code in the place where you want to put your translate option. I have put it in Logo Header region so that it is easily accessible to all users.

I am attempting to install this add-on and I can't seem to get it to work. Any help would be appreciated. I completed the following step:

Yes I misunderstood that step. It's working perfectly now.
Thank you!

Thanks Chris for such a quick response

We are trying to get this installed correctly and are having a couple challenges.

1st issue is when installing this add on to the header, it pushed everything down causing a bit of overlap. 2nd issue is every time the page loads in the very top you get the Google translate box that states "this page has been translated from english to german (or whatever language you choose), is there a way to stop that from popping up at the very top?

Thanks for your help on these things, and if you want to see them in action, the site is www.trabantforums.com

Hi, I visited your site, this is happening primarily because of the Header Logo. You need to increase the header tab height, goto AdminCP >> Appearance >> Styles >> Style Property >> Header and Navigation and increase the height till you get to the desired look. Hope this helps.

Thank you for responding and sorry for my delayed response. I went in and tried to fix it and we still had the same overlapping error even when we adjusted the header height and logo height.

I am wondering if there may be an error we are missing in the script or somewhere else?

before installing the addon...anyone has any experience translating from dutch to us and what it looks like in terms of good translation?

Staff member
It uses Google Translate so just go to https://translate.google.com/ and paste in a Dutch website URL. That will translate the site for you. That'll be the same translation as this add-on provides.

Chris D said:
It uses Google Translate so just go to https://translate.google.com/ and paste in a Dutch website URL. That will translate the site for you. That'll be the same translation as this add-on provides.
Click to expand...

yes. that is stupid of me.......just need vacation. This translation is very bad from NL-US.

as a matter of fact my site is already NL-US but im searching for a way where members can easily choose their language of choice...there's no such add on yet
You must log in or register to reply here.