XPress - A theme and bridge for bringing WordPress into XenForo 1.1.5 Patch Level 3 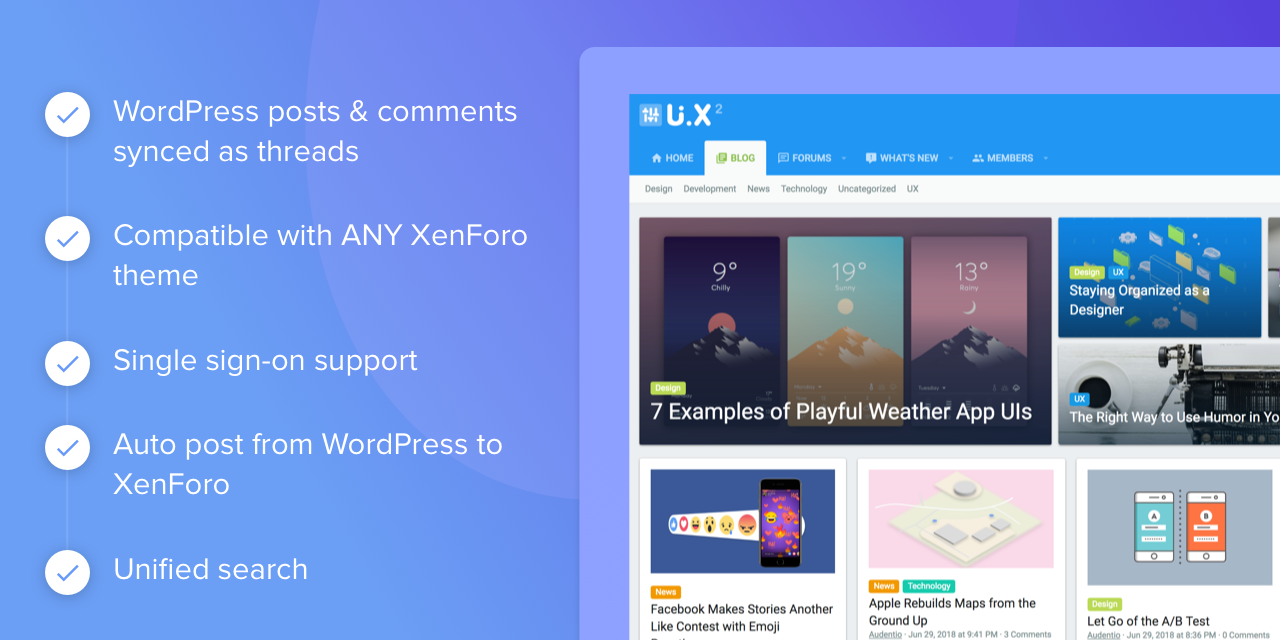 ​
XPress
XPress bridges XenForo and WordPress together for a smooth integration making managing your software systems easier and creating a fluid user experience.

Many platform directors struggle to keep two distributed software systems consistent. You have to maintain the theme and template separately which can be quite costly, to not only build but to maintain over time as well. You also need to manage two comment systems, two user accounts, two staff and usergroup levels, two subscription systems, and more. XPress lets you choose your preferred tools and bridges them to the other software.

XenForo is regarded as one of the most easily customizable and powerful forum platforms on the market. And WordPress powers roughly 1 in 5 websites on the internet. Pairing them together only made sense.

Try our demo and take a look at some completed projects to see this seamless integration in action.

To make managing platforms simple, we created XLink which is included with XPress and must be downloaded and installed separately. It is required to use XPress. XLink provides one location to link and manage your platforms, like WordPress (requires XPress) and MediaWiki (requires XWiki). Add new platforms with just a few clicks, access a list of linked users per platform, and more right from XLink.

Integrating different platforms can be a complicated process. Our experienced team of experts is here to help! As a part of the product purchase, our team will help install XPress on existing platforms, help with basic configuration, and assist in resolving server errors that may occur.

Please Note: Custom add-ons, customizations, and server configuration can prevent XPress from working properly. Should you encounter an issue, please create a ticket here. If the issue is due to custom add-ons, customizations, or server configuration we will offer a full refund if reported here within 30 days. ThemeHouse is at the sole discretion on refunds and you must allow us time to help fix the issue.

Wondering about performance impacts? Take a look at the results from some tests we ran for UI.X, XPress, XWiki, and XLink here.

​
Same one design, two softwares
With a one time setup, XPress is a cost-effective, time saving tool to help make sure you're always in sync.

Share memberships and ads, both ways
Premium content and advertisements can now be shared seamlessly between XenForo and WordPress. Set it up once and you're done.

Compatible with UI.X and UI.X Pro
Or any theme of your choosing! XPress is highly extendable and can be implemented in just a few easy steps.

​
Do you want to further enhance your forum? Here are some of the ways we can help!

Reactions: Frode789, bousaid, Walter and 12 others

We have exactly the same problem, after moving to a different server a few weeks ago (one to one copy), we constantly hear from support that our server configuration is being changed. Although we haven't changed anything. The support looks at the problem only partially or not at all and replies that it is passed on to the programmer. It is then always referred to the help page, but not everything that is important is there. I am currently very disappointed by the bridge and partly also the support.

I hope something will happen soon
Upvote 3 Downvote
Since 2019, I have been trying to be able to use this software in a productive environment. At some point in 2020, I gave up on it due to the large number of bug reports and decided to wait for the time being until these were ironed out and the software actually ran stably. In 2021 I started a new attempt. Same-same, but different. The main problem is the communication and authorization between XPress and its counterpart XLink. Both apparently require a (funnily enough completely unknown) special server configuration under which the X product series was presumably developed.

Since respect is given where respect is due: a big shout-out and thank you to Will @ themehouse, who has been (and up to date is) nothing but helpful in sorting out most of the issues and I really appreciated the way he lived up to the expectations of customer support & relationship. In mind that he is NOT the developer for the X-series, unfortunaly he can only work and help in a limited scope in a kind of on-site support and as soon as something affects the XLink core, he - as every other person over at TH - had to refer me to "the developer".

I´ve exchanged experiences with a few other X-customers over the years and had to found out, that I´m not the only one where this was, when things got worse, escalating the frustration level from 0 to 100 in a split second. In my case it´s all about the rest_key, the XLink_API_password. It´s working for user promotions on both platforms, for articles and comments - but when you click on the link /members/member.1/#thxpress-articles on a members profile to see his WordPress articles, resulting in the error "API call to '[domain.com]' failed: Request blocked by remote installation." . The API call via "GET https://domain.com/?rest_route=%2Fwp%2Fv2%2Fposts&rest_key=[value of the XLINK_API_PASSWORD]&author=1&context=edit&_embed=1&per_page=11" itself is generated by XLink, where WordPress is expecting a valid key from the "Authentication Unique Keys and Salts"-section of your WPconfig. Indeed testing the link with replacing the API password with WPs "LOGGED_IN_KEY" works flawlessly. In summary: the "XLINK_API_PASSWORD" IS working in general, but this single API call. And yes, the troubleshooting documentation (https://help.themehouse.com/en/articles/3443762-troubleshooting) was worked down beforehand.

All the above has been reported to TH. But what do you get in return? Initial you get 14 days of deafening silence. Than, after hitting them up again, you receive something like a canned reply: "I communicated with the developer attached to your ticket and they mentioned that the issues you outlined are caused by your server configuration and not the add-on itself which is XPress. Unfortunately, we are not able to assist with this issue as it is entirely of our support protocols." - a fishy sorry a** excuse, trying to deflect and basicly a denial of service while telling customers it´s their fault. Serious?!

Seeing the log files that no one investigated the error on site, no one accessed the server or the XF instance with the given credentials since reporting this, it seems that XLink and/or XPress has already reached his End of Lifetime without notice. Hearing that TH is working on another integration to replace the actual one just underlines that and makes it way more than just an assumption.

The canned reply tells the whole story, even without the need for an online translator: "Here you have our verbal middle finger, we don´t care, please f*off and leave us alone."

All this while being a TH customer for over 6 years with somehwhat 20+ licenses. "Disappointing" isn´t the word of choice. I´m pi**ed as fck.

ThemeHouse
Hi there Sperber, first of all thank you for taking the time to leave your thoughts and for your past support of ThemeHouse products. We are aware you've been in touch with our dev team regarding this issue. Unfortunately Xpress isn't a product that works for every single use case due to limitations with server configurations. We've done our best to work through the issues, but ultimately XPress isn't working properly within your server environment and troubleshooting an unfamiliar server isn't part of our support capabilities. We have a full refund policy in place for this reason, and have offered it via your open support tickets if you'd like to take advantage of it. We'll note the support lag issues, and appreciate you bringing that to our attention, as it's ultimately something we're actively working to resolve. Let us know if there's anything else we can help with.
Upvote 1 Downvote
Same experience others have detailed. Paid for installation as well but it just never lived up the the billing. Buggy - found customer service to take too long to response, and evasive/deflecting. Real shame given the cost.
Upvote 3 Downvote
My site has been running this since it was first released. I've never had a serious problem and the customer support is always prompt, professional, and friendly. Love working with this team.
Upvote 0 Downvote
The most BS customer service I've ever experienced in my life. Problems take weeks to be solved. Takes your money and runs away with it. Excuses after excuses. If I could do all over again, I would never have spent a single cent on these guys.
Upvote 5 Downvote
They were great. Installed the package for me with no problems and were good about keeping me in the loop as to what was going on.

ThemeHouse
Thank you so much azhousepro for your kind review! Our team was so happy to have done your installation, keep you in the loop during the installation, and answer any basic questions that you might've had. Let us know if we can assist with anything else!
Upvote 0 Downvote
Works great now. My suggestion is to provide better detailed common sense videos. I bet this would help. The help.wiki..... ehh, people don't read well. I say this because i run videos for my software. It cuts down on ALOT! and i mean good videos.

ThemeHouse
Thank you gforce for your kind review! We will also take your suggestion into consideration as well. Let us know if we can help with anything else!
Upvote 0 Downvote
If you want to flush your money down the toilet, go for this piece of crap.

They don't have such a thing as support. They just want to take your money and they don't give a **** if you have any issues.

I've been waiting since march 13, and the support guy shows up every few days, send some useless comments and disappears again.

I read all of your documentation and it doesn't work correctly. It had problems since day one.
Upvote 4 Downvote
Lots of bugs, especially if you don't use their Xpress WP Theme.
Slow ticket support. Slow developing and bugs solving. Caching not working with this addon.

ThemeHouse
When integrating two pieces of software, there are many considerations and varying factors. If you have any additional issues, please let us know.
Upvote 2 Downvote
Approached Themehouse almost a year ago wanting to create a CMS for our “how to” articles and have the same theme that matched our forums. Planned on spending several grand to achieve this look. Instead he suggested this mod and saved us a fair amount of cash. A year later I’ve had great success with few problems running this. It’s likely the sites favorite add-on that most don’t even know is there.

ThemeHouse
Our team is so happy to have helped you and your community out with creating this amazing add-on. Along with assisting you to resolve the few issues you have experienced. Please do let us know if we might be able to assist you with anything else! Thanks so much for your kind review and support.
Upvote 0 Downvote
Read more…
Top