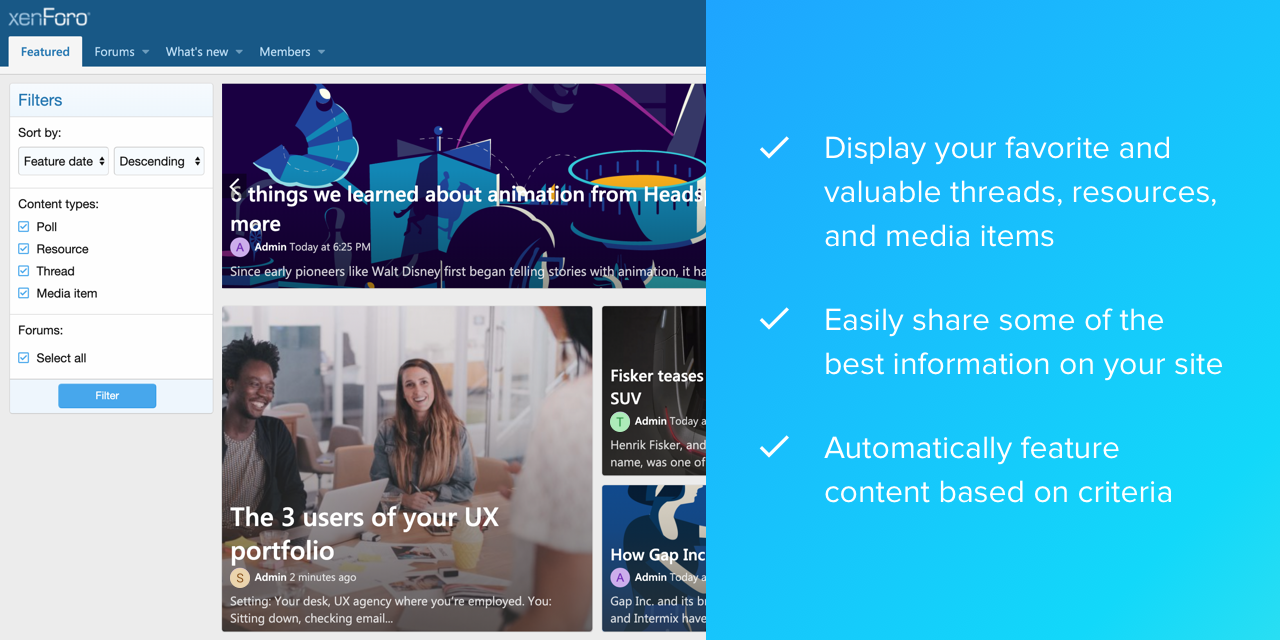 Get Featured Threads and Content for free by using the coupon code DISPLAYCONTENT during checkout.

Draw attention and maintain engagement with featured threads, resources, and media items! Spotlighting your favorite and valuable content gives your community an easy way to see some of the best information on your site. Create a page displaying featured content and make a widget too!

​
Free Branding Removal
This add-on does include branding but it can easily be removed for free! More information on how to remove the branding can be found here.

It will be great to have an option to see the featured threads as a list with a Load More button. Cheers.
Upvote 2 Downvote
I'm a big fan of the themehouse addons for xenforo, I generally give them most of the money I set aside for XF addons. This is a good addon like the rest, but I have to knock two stars off for some *critical* errors that seem to be being ignored despite having called attention to it several times.

Namely, the featured threads page looks terrible on mobile devices. This is because the image accompanied by the article was not sized correctly for that screen size, and comes out extremely small, almost un-viewable on a mobile device.

Seems like an easy fix, but it's been over a YEAR since I've called attention to it in the discussion thread, with no response. Seeing how 70% of my web traffic comes from mobile devices, this is a pretty big drawback and anyone in a similar situation should consider this before purchasing this addon.

ThemeHouse
Apologies for the inconvenience, Electrogypsy. One of our team members will be in contact to gather more information and we will get an update out to fix this ASAP. Thank you also for your continued support of our products!
Upvote 3 Downvote
Great featured threads
-Help visitors to focus on threads.
- Fast support and respond from developer.

ThemeHouse
Thank you for the kind feedback on this add-on and our customer support! Let us know if we can help with anything else.
Upvote 0 Downvote
Read more…
Top